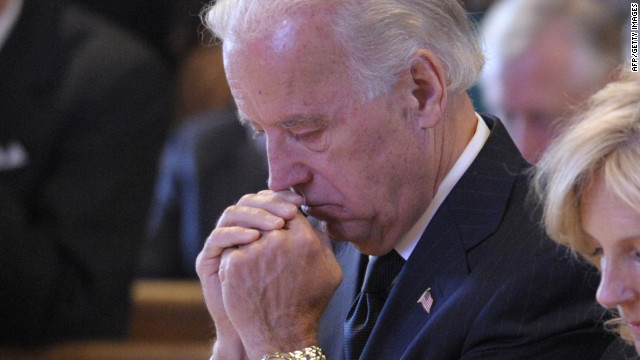 Amid all the smirking, chortling, and “give me a break, kid” sniggering that ill-mannered Joe Biden exhibited at the 2012 vice presidential debate, when he piously explained his stance on abortion, he exposed in totality the hypocrisy of liberal thinking.

Toward the end of the debate, Biden’s friend and one time houseguest, moderator Martha Raddatz, posed the following question to the candidates: “We have two Catholic candidates … [a]nd I would like to ask you both to tell me what role your religion has played in your own personal views on abortion[.]”

After Paul Ryan expressed how personal faith impacts his pro-life views, Joe Biden sobered up for a second and said, “My religion defines who I am, and I’ve been a practicing Catholic my whole life.”

Like many liberals, whether it’s a game of constitutional Twister or flexible religious creed, Joe fashions his faith to accommodate his personal beliefs.  Therefore, the vice president and the enthusiastically pro-abortion Barack Obama both feel comfortable calling themselves Christian.

Mr. Biden identifies with Roman Catholicism but doesn’t let that identity get in the way of his support of policy that directly contradicts church teaching on the sanctity of life.  Joe may believe he’s been “practicing” Catholicism his whole life, but he’d better keep those training wheels on his theological bicycle.

Echoing fellow Catholic Nancy Pelosi, Joe told Martha that except when it comes to the legally sanctioned death of innocent human beings, Catholicism has “particularly informed [his] social doctrine.”

But isn’t that what liberals do?  Quote Scripture and fund Planned Parenthood?  Talk about caring for the “least of these” and then lobby for dilation and curettage?  Receive communion and vote “yea” for partial-birth abortion?

After attempting to convince America of his firm commitment to the largest Christian church in the world, Joe Biden repeated twice that, “with regard to abortion,” the church’s position that “life begins at conception” is de fide, or “belonging to the essentials of the faith, by virtue of a papal ruling.”  Happy-go-lucky Joe said he accepts “divinely revealed teaching,” but only in his “personal life.”

In other words, Joe Biden’s liberal form of religion says that in the political realm he can grant himself dispensation to approve of, fund, and justify the murder of the unborn, all of which he claims he shuns when he’s at home or attending Mass.  Sorry, Joe, but Pontius Pilate found out that personal disapproval doesn’t erase the stain of innocent blood from guilty hands.

Biden further extended Christian charity to Raddatz, Ryan, and the Sandra Flukes of the world, as well as to “equally devout Christians, Muslims, and Jews,” whom Joe believes also condone abortion on demand.  Joe Biden explained that as a Christian, he cannot impose his unwavering devotion to Catholic doctrine on others.  However, he is perfectly comfortable with imposing an agonizing death on those whom, if he’d walk in the faith he professes, he could save.

For the entirety of the debate, Joe hid his Roman Catholic “light under a barrel,” especially when, referring to Paul Ryan, he said that “unlike my friend here, the-the congressman, I-I do not believe that we have a right to tell other people that — women they can’t control their body.”

In light of Biden’s lopsided philosophy, one can’t help but wonder whether the form of trendy religiosity he professes also believes that Jesus had no right to tell the adulterous woman to go “and sin no more.”  After all, she was a woman, and it was her body.

In the end, Joe Biden can smirk, sneer, and disparage Paul Ryan and his stance on abortion that marries truth, core conviction, and selflessness with personal faith all he wants.  For those who had ears to hear, Biden’s apostate theological view concerning abortion confirmed during the debate that, as Peter said in 2 Peter 3:3, “in the last days scoffers will come, scoffing and following their own evil desires.”  And those scoffers occupy the pews of the liberal Democratic Party, right alongside “practicing Catholics” like Joe Biden.