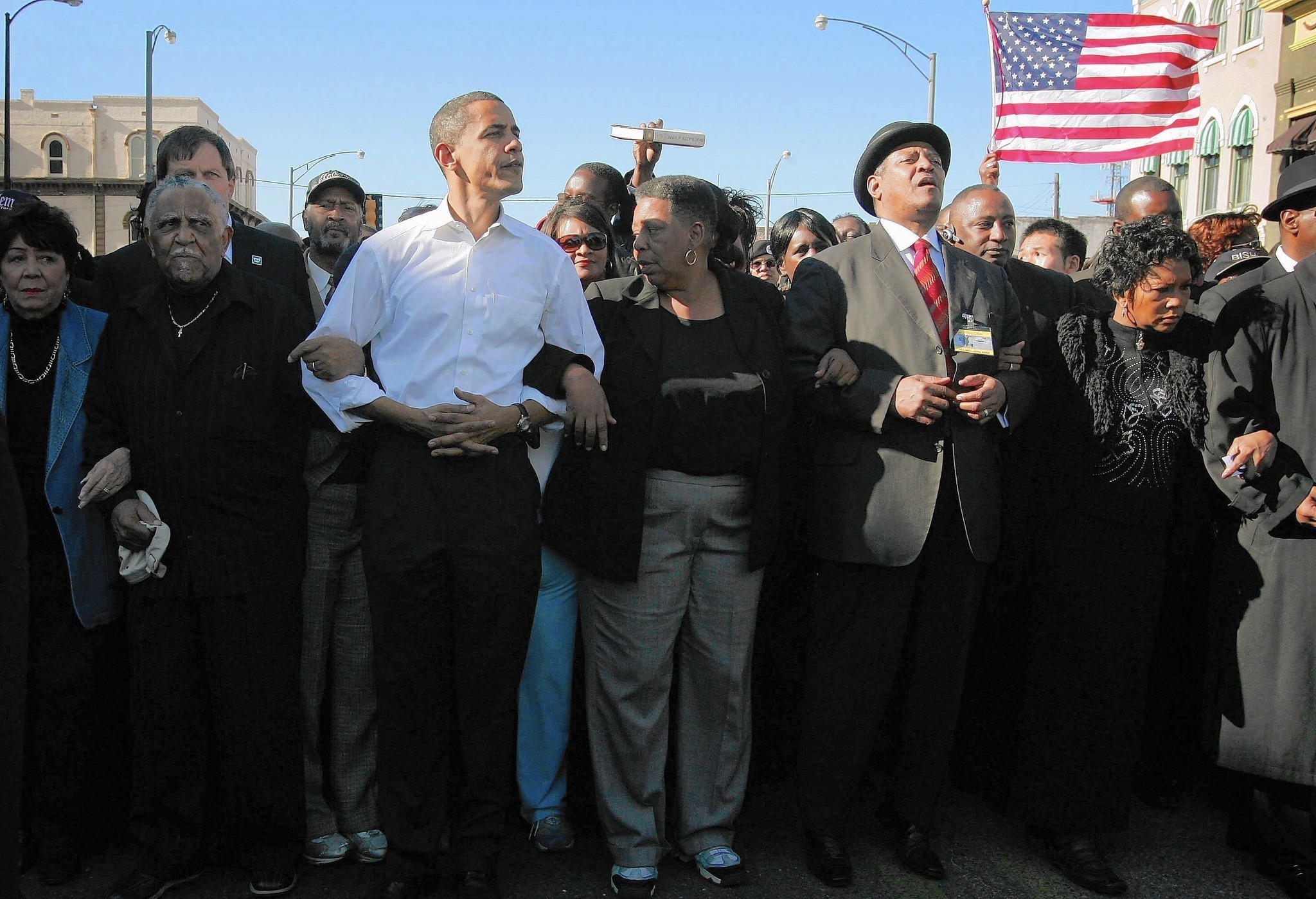 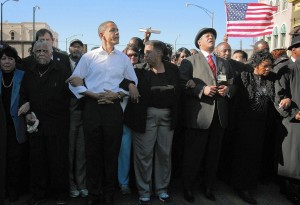 Under the guise of commemorating justice, on the 50th Anniversary of the Bloody Sunday March in Selma, Alabama, Barack Obama engaged in his usual artful deception by exploiting the event to further his agenda.

While placing the subtext of blame upon the shoulders of racist white men, to make a self-serving point concerning illegal immigration Obama used black Americans as beasts of burden to haul the weight of his reprimand.

For starters, historical revisionist Barack Obama left out the fact that those doing the beating in Selma were members of the Democratic Party. The president dared not reveal that, 50 years later, both he and his political cronies are now politically and economically billy-clubbing the very people he pretends to defend.

Keynote speaker Obama opened the discourse by extolling civil rights leader/Martial Law advocate John Lewis (D-GA).  Predictably, before long, Obama’s words started to sound more like he was discussing his own struggles as a ‘fundamental transformer’ than commemorating a half-century old injustice.

Identifying with freedom marchers at Selma, Obama began to compare the struggle for civil rights with the need for unnamed oppressors to accept his “idea of a just… fair… inclusive… generous America.”

At one point, the president went so far as to side with phone-buddy Kanye West by mentioning that white newsman Bill Plante confirmed Kanye’s Beyoncé vs. Beck and Taylor Grammy assertion when he said that on the day of the original Selma march, “white people lowered the quality of the [hymn] singing.”

Then, what came across as a leftist jab to the jaw of those who disagree with his illegal immigration policy, Obama said, “We are well-served to remember that at the time of the marches, many in power condemned rather than praised them.”

“Back then, they were called Communists, half-breeds, outside agitators, sexual and moral degenerates, and worse,” Obama explained, “Their faith was questioned. Their lives were threatened. Their patriotism was challenged.

What could more profoundly vindicate the idea of America than plain and humble people — the unsung, the downtrodden, the dreamers not of high station, not born to wealth or privilege, not of one religious tradition but many – coming together to shape their country’s course?

Rest assured that when Barack Obama names ‘dreamers… shaping [the] country’s course… [and]… America being not yet finished,’ and when he proposes “closely align[ing] with our highest ideals” what he is really referring to is a nation remade entirely upon progressive principles.

Moreover, know this: when this president speaks of “a more perfect union,” and then says this is “a roadmap for citizenship and an insistence in the capacity of free men and women to shape our own destiny,” the underlying theme is a cry for an America flooded to overflowing with illegal immigrants.

Take for instance his reference to “pick[ing] up torches and crossing the bridge,” which was followed by his hinting at the moral equivalency between coyotes on jet skis smuggling illegals across the Rio Grande and those who legally migrate to America.

By equating illegal immigrants with Iwo Jima and the moonwalk and obscuring insinuation behind commendation, Barack Obama managed to successfully use Selma to denigrate two of America’s greatest accomplishments.

Then, mid-speech, the president justified stirring racial tensions when playing the “race card,” brought up the “long shadow… [of]… this nation’s racial history,” the inequity of black incarceration, and the need for voting rights, something he apparently believes illegals deserve.  Subsequently, while skirting his own policy contribution to a situation he stressed was indicative of racial injustice, Obama broached the volatile subject of black poverty.

Quickly returning to illegal immigration, Mr. Obama introduced his own selfish agenda into a moral issue by sharing his skewed view of “American exceptionalism.”

The president seemed to suggest that individuals who cling to the rule of law simply do not understand that those who risk everything to realize the promise of citizenship are the ones who truly love and believe in America.

According to President Obama, American exceptionalism contains the “imperative of citizenship.”

That’s why Obama implied that border jumpers are somehow on par with black Revolutionary era heroes like Crispus Attucks or U.S. refugees such as Holocaust survivors, Soviet defectors, and the Lost Boys of Sudan, and why he believes true Americans “brave the unfamiliar” by doing things like “stowing away on ships.”

Then, after likening the plight of MS-13 gang members to Holocaust survivors, Obama related DREAMers in the military to “the Tuskegee Airmen, Navajo code-talkers, and Japanese-Americans who fought for this country even as their own liberty had been denied.”

The black civil-rights crowd, who view equal rights for sexual orientation as vastly different from race, must surely have appreciated the mental imagery Obama concocted when he identified Selma with the LGBT community saying, “We are the gay Americans whose blood ran on the streets of San Francisco and New York, just as blood ran down this bridge.”

When paraphrasing, “You are America… Unencumbered by what is, and ready to seize what ought to be,” America’s first community activist president again paid homage to his late mentor, Saul Alinsky, who often spoke of “the world as it is and the world as it ought to be.”

Before suggesting that “Yes We Can” belonged in the same context as “We the People… [and]… We Shall Overcome,” the Mt. Rushmore hopeful mocked those who revere an iconic American identity when he said that America is “Not stock photos or airbrushed history or feeble attempts to define some of us as more American than others.”

Barack Obama ended his sermon by once again reminding those in attendance that our “union is not perfect,” and by quoting Isaiah 40:31, a Scripture he botched at the National Prayer breakfast in 2013.

Renewed in strength, tireless transformationist Barack Obama said he considers himself among the “we”… who “abhor unfairness, and despise hypocrisy… give voice to the voiceless, and tell truths that need to be told.”

And while that sounds magnificent, underneath all the flowery rhetoric, this president promotes inequity, personifies hypocrisy, funds and supports silencing the voice of the voiceless and, even if his life depended on it, is completely incapable of telling the truth.