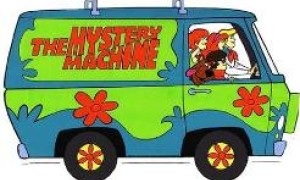 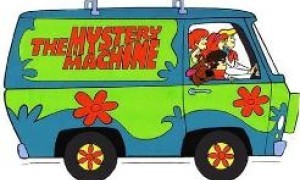 Hillary Clinton has recommenced in her desperate attempt to claw her way from Chappaqua, New York all the back to the White House.

As part of the effort, Mrs. Clinton is now traveling around in a van roomy enough to fit Secret Service agents, personal assistants, all her pantsuits, and almost all the stuff that she and Bill stole from the White House when they left in 2001.

Hillary’s personal aide, Huma Mahmood Abedin, is also traveling with former first lady. Huma is so dedicated to the cause that she left her husband Anthony and toddler son Jordan Zain behind and is riding together with Mrs. Clinton in the now famous Scooby-Doo.

Meanwhile, one can’t help but wonder whether an unparented Anthony is doing some tooling around town himself, hawking his wares out of the back seat of his very own Weinermobile.

Either way, wieners or no wieners, “Lolita Express” or no “Lolita Express,” Hillary must have decided now is as good a time as any to show her support for undocumented workers. And, in order to do so, she made a pit stop for lunch at an establishment notorious for hiring illegal staff.

Shortly after arriving in the Buckeye state, Mrs. Clinton slid out of the back seat of the $60,000, taxpayer-funded Scooby-Doo van and ventured – pink pantsuit, movie star Ray-Bans, Blackberry, and all – into a Chipotle Grill to address her hankering for amnesty-friendly Mexican food.

Now for those watching, that was impressive.

After all, Hillary, who hosted a $3 million wedding for her future White House advisor/daughter Chelsea, and who fancies herself a “champion” of “everyday” people, could have easily dispatched one of her minions – er, I mean assistants – to fetch her a “chicken burrito bowl, a chicken salad, a Blackberry Izze drink, and a soda” as well as an extra side order of Omega-3-laden guacamole.

But humble public servant that she is, Hillary Clinton did not.

Instead, after working up an appetite out-gassing a pack of salivating media types who were seen chasing her van on foot, Ms. Hillary must have felt that Ohio was as good a state as any to prove to America that ordering a 1,654 calorie lunch is another common folk task that, if need be, she can handle all by herself.

So there you have it. On the first “Scooby dooby dum dum” day of Hillary Clinton’s cartoonish campaign, the big news is that one of the most egocentric, haughty politicians on the planet actually ordered her own lunch.

Hillary stepped out of the van, walked all by herself into the cafeteria-style haven for illegal workers, and ordered up a steaming bowl of beany burrito fixings that was likely responsible for most of the methane emissions emanating from the tailpipe of what should henceforth and in perpetuity be referred to as Hillary Clinton’s Scooby-Doo-Doo mobile.