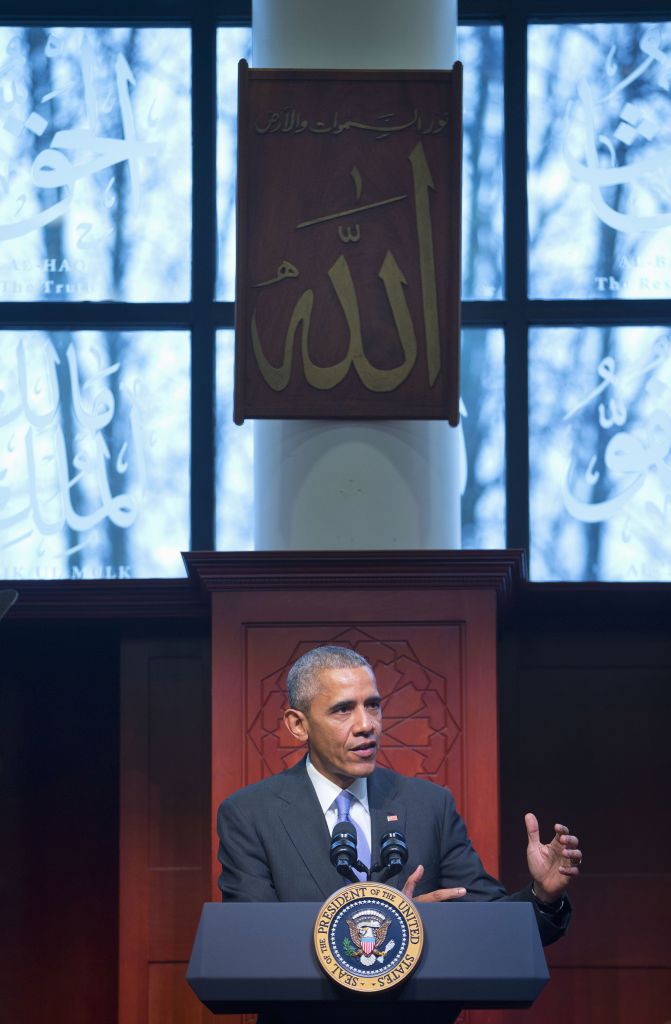 As the body count at the hand of Islamic extremists continues to rise in America, shouldn’t the president be trying to come up with a way to defend Judeo-Christian types, who cling to guns and the Bible, from Islamic jihadi types who cling to machetes and the Quran?

Guess not, because for his first visit to a U.S. mosque, Obama chose a congregation where a Sudanese native and former member of the Muslim Brotherhood, Mohamed Adam el-Sheikh, was chief imam for almost twenty years.

Why would a U.S. president even give credence to a congregation once led by a man who also lent a hand in founding the Muslim American Society, a Muslim Brotherhood-established organization interested in advancing sharia law?

Does Obama not care that in his spare time, the current executive director of the Fiqh Council of North America, an association of Islamic legal scholars, also helped found the notorious Dar Al-Hijrah mosque, led by the late al-Qaeda terrorist Anwar al-Awlaki?  Or that in 2004, while still serving as imam of the Islamic Society of Baltimore, el-Sheikh discussed Palestinian suicide bombers with the Washington Post?

If certain Muslims are to be cornered where they cannot defend themselves, except through these kinds of means, and their local religious leaders issued fatwas to permit that, then it becomes acceptable as an exceptional rule, but should not be taken as a principle.

Even the alleged terrorist-affiliated Council on American-Islamic Relations (CAIR) commended Obama’s decision to visit the Islamic Society of Baltimore, saying:

For a number of years, we’ve been encouraging the president to go to an American mosque.  With the tremendous rise in anti-Muslim sentiment in our country, we believe that it will send a message of inclusion and mutual respect.

Maybe CAIR should tell that to the two homosexual men murdered by devout Muslim-American/convicted sex offender Ali Muhammad Brown, who, after rinsing the blood off his hands, went on to avenge Muslim deaths overseas by also executing 19-year-old college student Brendan Tevlin at a traffic light.

Prior to the president showing up in Baltimore, White House spokesperson Josh “Not So” Earnest had this to say:

I think the president is quite interested in making sure that we’re affirming the important role that Muslims play in our diverse American society and certainly affirming their right to worship God in a way that’s consistent with their heritage.

Question: Who exactly is not upholding “the important role that Muslims play in our diverse American society”?  And in the 3,186 mosques located in cities all across America, which people are having their “right to worship God in a way that’s consistent with their heritage” thwarted?

Furthermore, rather than worrying about the 3 million Muslims steadily progressing toward becoming the second largest religion in America, maybe Josh should be making sure that, despite Obama, the Little Sisters of the Poor retain their “right to worship God in a way that’s consistent with their heritage.”

Meanwhile, the president descended on the Islamic Society of Baltimore, which is sort of like preaching about being less discriminatory toward Christians from the pulpit of the hateful Westboro Baptist Church.

In Baltimore, Obama mentioned bullied Muslim children and vandalized mosques and lauded Ibtihaj Muhammad, a 2016 female Olympian who plays with swords while dressed in a hijab.  Then he pointed out that “we have to understand: an attack on one faith is an attack on all our faiths.”

One small problem!  This is the guy who consistently assaults certain faiths.

In 2009, prior to a speaking engagement at Georgetown University’s Gaston Hall, Obama requested the crucifixes be covered up.  That same year, in order to have a “non-religious” Christmas, Obama suggested that the East Room Nativity be relocated.  Likewise, the president has blamed Christianity for lives lost during the Crusades and regularly ridicules the Christian faith with snide remarks.

As for God’s chosen people, Obama insulted Jews at a White House Hanukah celebration; publicly dissed Bibi Netanyahu; and, worse yet, minimized the threat posed by providing a genocidal anti-Semitic revolutionary theocratic state a pathway to a nuclear bomb.

Not to mention the president’s failure to acknowledge the worldwide genocide being waged by Muslims against Christians, or ignoring the fact that in America, Jews are ten times more likely than Muslims to be targeted for a hate crime.

Advocating for Islam seems to be Barack “that’s not who we are'” Obama’s most ardent public relations effort.  In his recent State of the Union address, anyone perceived to be indulging in what he perceives as anti-Muslim bigotry was publicly rebuked when he said:

When politicians insult Muslims, whether abroad or our fellow citizens, when a mosque is vandalized, or a kid called names, that doesn’t make us safer. That’s not telling it like it is. It’s just wrong. It diminishes us in the eyes of the world.

How about when Muslim extremists living in the U.S. shoot and kill 14 people at a Christmas party; behead a co-worker at a food distribution plant; or, “on a mission from Allah,” stab a store clerk to death?  Does that “make us safer”?

Besides, how is America elevated in the eyes of the world if our president remains silent after Islamic extremists behead two Coptic Christians in New Jersey, or slit the throats of three Jewish men in Massachusetts?

Since Barack Obama ascended from the mean streets of Chicago to the Oval Office in 2009, there have been approximately 64 people murdered by Muslim extremists on U.S. soil, and that’s not counting the number of American deaths at the hands of Muslims overseas.

And yet, in another attempt to address what Barack Obama calls a “hugely distorted impression” of Islam, the one suffering from what perceives in others hoped to remedy the problem by commiserating with the guilty at a radical mosque in Baltimore.