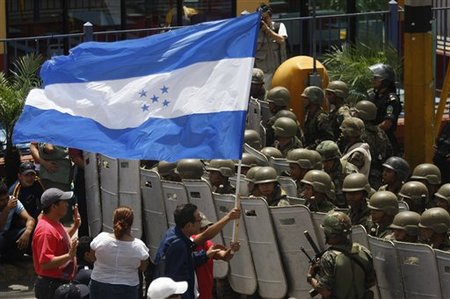 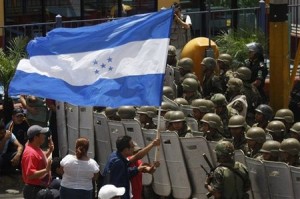 Thomas Jefferson said, “Resistance to tyrants is obedience to God.” Throughout history, oppressed people tend to eventually rise up against dictatorial leadership and demand freedom.  Barack Obama, who should champion the cause of liberty, appears to endorse repressive governments and leaders and admonish the actions of those fighting to attain or maintain independence from tyranny. President Obama exhibits a disturbing tendency to support government regardless of which side of the law they err on.

When Iran sponsored an illegal election Barack Obama failed to condemn their action for days.  He stood by refusing to get involved for fear of appearing to “meddle” in Iran’s affairs.  According to information gathered from Iranian province, the reformist challenger, Mousavi won the election, “…getting 65 percent of the votes cast.” Ahmadinejad prematurely claimed victory, with the support of the theocratic mullah’s, prompting protests when the Iranian people demanded fair and free elections.  Obama’s response to the accusation of widespread irregularities and the premature closing of polls was lackluster at best.

Obama exhibited unspoken support for the government of Iran and refused to strongly condemn the action being taken against Iranian pro-reform, freedom fighters, while they were being bludgeoned with government sanctioned batons and bats.  Looking to Obama for support, all the reformists got was weak acknowledgement for their courage followed up by a supportive government clarification, “…I have made it clear that the United States respects the sovereignty of the Islamic Republic of Iran, and is not at all interfering in Iran’s affairs.”  While Obama proclaimed respect for Iran rule, plainclothes militia rode through the crowds on motor scooters, axing peaceful protesters to death with sovereign government approval.

Then, when Honduran military rose up against President Mel Zelaya, who decided to change the countries constitution to extend his term limits in the style of Castro, Ortega and Chavez, Obama quickly denounced patriotic defense and sided with the dictator.

One has to ponder why the president of the United States would be sympathetic toward  the Honduran leader who decided he was above the law?   Zelaya determined his nation’s constitution required a re-write, to extend time in office without the approval of a constitutional assembly, in the tradition of Hugo Chavez, Daniel Ortega and Fidel Castro…and Obama sides with Zelaya?

In fact, Zelaya, with the assistance of Hugo Chavez decided to declare the vote on his own and had the Venezuelan president ship him ballots.  The Honduran Congress and the Supreme Court ruled his referendum unconstitutional.  Refusing to be curtailed in his quest for dictatorship, Zelaya, “…led a mob that broke into the military installation where the ballots from Venezuela were being stored and had his supporters distribute them in defiance of the Supreme Court’s order.” The Honduran military, in defense of the nation’s law, arrested Mr. Zelaya  and exiled him to Costa Rica in what is being considered by chavistas, throughout the region, and now even here is America, a military coup…and Barack Obama sides with Zelaya?

What hombre chavistas, Chavez, Castro,  Ortega and Obama fail to mention when defending the overthrown dictator is that the military acted, “…on a court order to defend the rule of law and the constitution.”  Why an American president would “lash out against” the Congress and military of Honduras defending its law and Constitution should be a red flag to every American who knows that Barack Obama has opined that he considers the Constitution of the United States a “flawed” document. The Honduran people have stated that they, “…want to live in peace, freedom and development.” Why does Barack Obama side with a dictator who wants to deprive those basic God given rights?

Barack Obama’s exhibits affection for Hugo Chavez, Fidel Castro and exerts an obvious desire to placate an Iranian despot while apologizing for all things American.  Obama neglects the blood of the Iranian people drenching the streets of Tehran and demands the return of Zelaya to Honduran power, in spite of the threat he poses to the laws and Constitution of that nation.  When the “hope and change” cloud of deception dissipates and the “forest can be seen from the trees”, Obama’s warmth toward despotic dictators should leave the cautious observer a tad apprehensive.

The question arises as to why Obama sides with government regardless of whether they are sponsoring false elections to entrench dictators, hacking peaceful protesters to death with machetes as they peacefully march for freedom, changing the legal constitution of nations, breaking the law or defying their Supreme Courts?

Could it be that Obama fears aligning with the masses against the government, because it could impact his own authority in the future?  If Obama agrees with the people, he allies against himself and threatens his own dearly held autonomy and ability to exercise government control or presidential decree if the need should arise.

If Obama challenges the authority of the Iranian government or Honduran president he puts himself in the position of being challenged by the world community for diktats he deems necessary against his own citizenry.  Lack of intervention affords the American president the ability to say that he expects the same respect for his decisions as he extended to governments and presidencies by supporting their sovereign decisions.

Obama appears to be so committed to government control that bullets, axes and illegal ballots trump democracy, freedom, liberty and legality.  Obama’s slow response to condemn violence against pro-democracy reformers is juxtaposed against his rapid-fire response condemning the supposed military coup in Honduras.  Obama’s defense of the Honduran president’s illegal actions in re-writing the nation’s constitution to accommodate his desire to extend term limits is something that Obama seems to empathize with.

The American people need to analyze their president’s actions, non-actions, silence and statements.  His intrinsic beliefs are revealed by whom he supports and whom he chooses to condemn. Barack Obama’s lack of desire to stand up for  freedom fighters, while defending tyrannical governments, despots and dictators, illuminates who Obama is aligned with politically and what he may have planned for our Constitution, our future elections, as well as our nation’s highly esteemed liberties and freedoms.