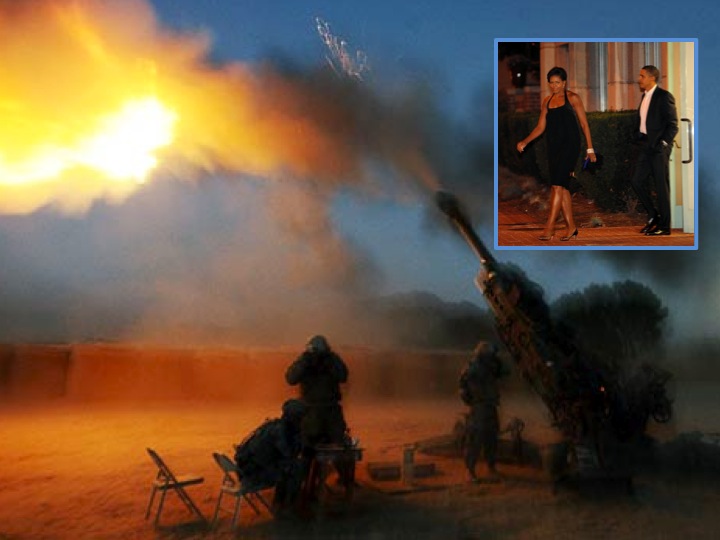 The President and First Lady are being criticized for going out on a date, while American soldiers were dying in Afghanistan.  Addressing the controversy, Barack and Shelley, bubbling over with warmth took a couple of minutes to speak to the press, while entering a restaurant in Washington DC on their 17th anniversary.

The President told the gathering press that The BLUE DUCK TAVERN was specifically chosen to show the First Couple’s solidarity with those presently fighting in the war zone.  Deciding to  directly address the military deployed in Afghanistan, Obama took advantage of the opportunity to give the soldiers specific instructions to follow until he decides what to do.

Let me be perfectly clear, I am well aware that you are in a dangerous situation.  But as my lovely bride and I enter this tavern you come to mind.  I plan to pick something off the menu tonight that symbolizes the military directives I plan on discussing with  General McChrystal in the weeks ahead.

Thinking over the situation on the plane returning from Copenhagen and trying to decide where to dine for our anniversary dinner, everything just fell into place. Michelle suggested we eat at the BLUE DUCK TAVERN because of its,   “…warmth and convivial setting,” which I think aptly typifies her personality, but I digress.

I thought, ‘BLUE’ and then I thought, ‘DUCK’ – so tonight I come to you with a very special message asking you to resist being  ‘BLUE’ because you have no support, back up, reinforcements or direction.

I know the situation in Afghanistan is growing increasingly dire by the day, but this past week has been difficult for me too!   Michelle and I have been sacrificing alot also, having just returned from Copenhagen with our friend Oprah, where we lost the bid for the Olympics.  I want you to know that in Copenhagen I learned that losing isn’t all that bad  after all!   This is important for you to understand because I’m not really all that into victory in Afghanistan.

So! My advice to you is this! If insurgents attack you or the Taliban chuck a bomb in your direction…do what comes naturally – and ‘DUCK’ and keep ”DUCKING’ until I make up my mind as to what I’m going to do.

I really have to go now Michelle is stabbing the table with a fork giving the signal that it’s way past her dinner time…so I have to run.

Waving goodbye and stepping away from the glare of the cameras, the President disappeared through the double doors.  True to his word and in keeping with his ‘DUCK’ message, the President’s anniversary meal consisted of Moscovy DUCK Breast with Braised Leg and Plum.  The First Lady dined on Braised Wreckfish because after waiting so long nothing on the menu appealed to her discriminating palate and wreckfish was the only thing she could even remotely relate to.

Sitting in front of a cozy, roaring fireplace, sharing loving looks across the table, a sensitive and in-touch First Couple clasped hands while sharing…Warm Flourless Chocolate Cake Flamed with Bourbon and Chocolate Cream and a dessert wine of Coppo Muscato D’Asti 2006…while 10 American troops, who have heretofore been denied reinforcements, were  zipped into body bags in preparation to be shipped home.

[This is fiction–to a point]