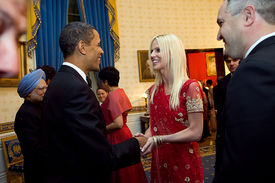 It began as a zany gate-crashing incident at 1600 Pennsylvania Avenue and now it appears uninvited White House State Dinner guest, Tareq Salahi, has a fascinating link to controversial Columbia University professor of Modern Arab Studies, Rashid Khalidi. Who could forget Rashid Khalidi, PLO sympathizer and friend to Barack Obama? Jew hater Khalidi contends that the establishment of Israel was a “catastrophe” and called the Jewish nation a “racist state” and an “apartheid system in creation.”

Personal long-time friend, Rashid Khalidi is just one of the many extremist individuals who have had questionable affiliations with Barack Obama.  Though the President strives to keep the Khalidi connection in check, an article in the LA Times reveals a closer alliance than Barack Obama cares to admit.

It was a celebration of Palestinian culture — a night of music, dancing and a dash of politics. Local Arab Americans were bidding farewell to Rashid Khalidi, an internationally known scholar, critic of Israel and advocate for Palestinian rights, who was leaving town for a job in New York.

A special tribute came from Khalidi’s friend and frequent dinner companion, the young state Sen. Barack Obama. Speaking to the crowd, Obama reminisced about meals prepared by Khalidi’s wife, Mona, and conversations that had challenged his thinking.

His many talks with the Khalidis, Obama said, had been “consistent reminders to me of my own blind spots and my own biases . . . It’s for that reason that I’m hoping that, for many years to come, we continue that conversation — a conversation that is necessary not just around Mona and Rashid’s dinner table,” but around “this entire world.”

More recently, Obama addressed his association with controversial character Rashid Khalidi by downplaying the relationship in the following way, “To pluck out one person who I know and who I’ve had a conversation with who has very different views than 900 of my friends and then to suggest that somehow that shows that maybe I’m not sufficiently pro-Israel, I think, is a very problematic stand to take…So we gotta be careful about guilt by association.” Guilt by association, wasn’t it Obama who commemorated the years of consistent conversation around the Khalidi’s dining table?

Over the years, Barack Obama has distanced himself from the circle of extremist associates like Bill Ayers, Tony Rezko and Reverend Jeremiah Wright.  Yet, while the White House denies it was the notorious Ayers on the White House visitor’s list, the cofounder of Weather Underground’s name has mysteriously disappeared from the roster.

At the State Dinner, the Salahi’s were officially announced and took cozy photographs with the Vice President, Chief of Staff and Katie Couric. And if that weren’t stunning enough, it now appears, “…President Obama met the couple … as they went through the receiving line.”The Secret Service is downplaying security threats posed by the couple and the Salahi’s attorney Paul Gardner claims his “…clients were cleared, by the White House to be there.” If it is found out that Salahi was a valid guest, the question that deserves an answer is who granted the Khalidi-styled Director entry to the function? Specifically, because the Obama administration, on perpetual surveillance for threats posed from right-wing extremists, pro-life advocates, ex-military and born again Christians are, together with the Secret Service, bizarrely downplaying security threats posed by the Salahi’s.

Supping around the First State Dinner table with cronies like Michaele and Tareq wouldn’t be a first for Obama who admittedly dined on more than one occasion with the likes of Mona and Rashid Khalidi. Based on President Obama’s comfort level dining with PLO activists, its feasible that either he or a close associate extended the invitation to kindred Palestinian sympathizer Tareq Salahi and his wife.

Let’s review: Salahi is on the Board of Directors of Palestinian Task Force, which has connections to former American Committee on Jerusalem who’s President was Rashid Khalidi. Obama is a friend and supporter of Khalidi.  Then out of nowhere the Salahi’s show up at the first White House State Dinner and make it past high security barriers to the reception line successfully gaining direct access to the President of the United States.

Could this be one big serendipitous twist of fate? Perhaps, but if Michaele and Tareq were indeed legitimate White House guests, such a revelation would be of indicative of anti-Israeli sentiment deep within the recesses of the Obama administration and would be a more unsettling than two reality TV wannabes successfully crashing a White House party. If proven that the Salahi’s are old friends of Barry such startling news could be all that is needed to catapult the President into his own starring role in a reality show entitled, How to Dupe a Nation. The series can be a primetime special where a left wing, liberal, anti-America, Israel hating, radical socialist, swindles America into electing a barefaced impostor to the undeserved position of leader of the free world.

The Black eyed Peas, the President and the Party Crashers — what a surprise! 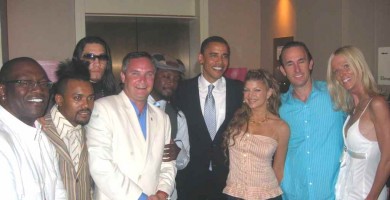 “Tareq & Michaele were honored to be invited to President Obama’s private viewing box at the Lincoln Memorial.” (From the Facebook page) 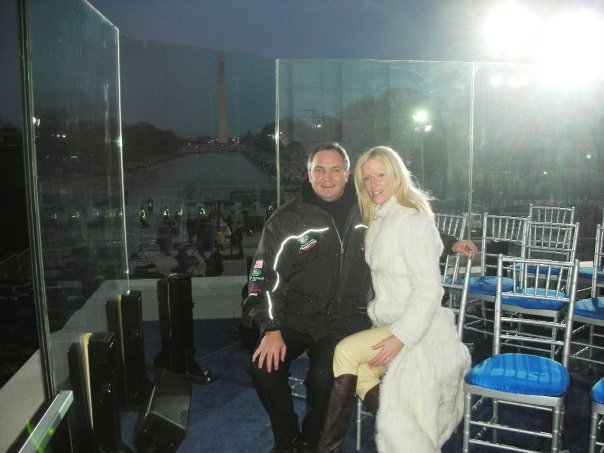