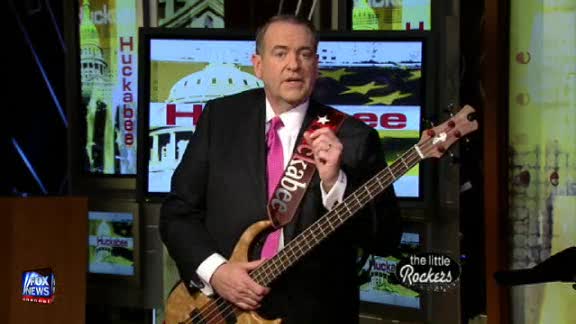 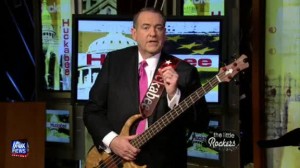 Sorry people but the Mike Huckabee Show is just too painfully corny for me.  Weekly, a misty eyed Mike stares dead on into the camera extracting emotion and support from cheesy viewers nationwide.  The Governor does this, while a live studio audience of wholesome people clap as if Emeril Lagasse was about to toss out Spinach Empanaditas to a pod of weddell seals.

Couple Huckabee’s cult like studio audience together with a house band, composed of a hokey cacophony of folks from the FOX News crew who all either like to “play music or sing”– and things couldn’t get more painful. The Little Rockers close out the hour with the former Arkansas Governor, complete with Huckabee guitar strap, gleefully slapping away on the bass.

On Saturday, after six loads of wash, scrubbing two bathrooms and shopping at a grocery store that has zero parking by 8:00 am, the dimpled Huckabee’s poetic soliloquy that inspires the audience to mindlessly applaud even when Mike apologetically says, “Going to commercial break” is more than one person can bear.

Although a reluctant watcher, a few weeks ago the ex-governor, who championed a hundred pound weight loss, appeared to be sporting a noticeably deeper dimple.  In fact, it appeared as if Mike’s facial indentation could double for the Pillsbury Doughboy’s missing belly button.

Mike “Ahhh Shucksabee,” author of Quit Digging Your Grave with a Knife and Fork: A 12 Stop Program to End Bad Habits and Begin a Healthy Lifestyle appeared as if the girth that ” 12 stopped off” was beginning to “12 stop on.”  Passing my hubby with the dust mop, I commented, “Honey, Mikey looks as if his tent pegs need to be widened a tad” a comment that was met with a “Ugh huh, whatever you say dear.

I believe that for me, the beginning of the Huckabee downward lack of credibility spiral began when Paula Deen, “the queen of Southern cuisine” paid a visit to share cooking tips and talked about “big fat chickens” to “Y’all.” But what really took the red velvet cake was Fox News announcing Michelle Obama would be joining the Huckster for a bipartisan discussion on childhood obesity.

I’m just wondering, is Fox News now becoming “unfair and unbalanced?”  It used to be Larry King was the only mildly respectable sycophant on cable.  The Michelle on Huckabee announcement makes this woman yearn for Geraldo Rivera reporting live from hurricane central or former news correspondent hoarse-throated, “my sources tell me,” Rita Cosby to be reinstated to Fox’s blonde brigade.

Admit it, Mike and Michelle are a combo only a mother could love…every mother but this mother that is.  Michelle with stationary, over-plucked eyebrows, fixed smile and gaze and an emotionless, marionette speech pattern, coupled with an avuncular, bass playing, Conservative ex-governor in touch with his feminine side is a Saturday night lineup sure incite channel surfing for old Lawrence Welk reruns.

Michelle, official representative of the “Let’s Move” anti-childhood obesity campaign, will appear on Obama nemesis, the Fox News network.  Shelley will present solutions to a porkulent problem the government has been hankering for years to use as entrée into universal health care.  And here Mike Huckabee sets paper plates and plastic cutlery out on the governmental buffet table for Michelle to fill with bureaucratic celery sticks made with Democrat fat-free sour cream.

When asked why the First Lady would be appearing on the show, Huckabee explained, “It is not a left/right, liberal/conservative, and Democrat/Republican issue. This is an issue that falls beyond what I call the ‘horizontal’ issues of left and right and rises to the ‘vertical’ level of up or down.” I give the whole idea a really big Siskel and Ebert, thumbs down!

I can see it now, after an insincere on camera hug, First Lady Michelle and Mike hold hands and commiserate, while the Little Rockers play show tunes softly in the background.  In a bipartisan effort the duo may be able to pinpoint why people who preempt, “most cravings by avoiding sugar entirely [and] flavor coffee with Splenda,” no longer find it possible to squeeze between the left and right side of an oversized host’s chair.

Mike could equally counsel Michelle because, try as she might to hide it with designer dresses and tight J. Crew sweaters, Mrs. Obama seems to have added some poundage to her “lithe frame” since changing locations from Chicago Deep Dish Pizza Pieville to Wagyu Beef Township.

Cornball Huckabee can alternate between bottom lip biting and dimple exposure when discussing the threat chubby kids pose to the future of Type II diabetes—a struggle the ex-governor personally relates to.  Michelle can bring a basket full of fresh organic, home grown garden vegetables and like Adam and Eve in a garden free from political bickering, Mike and Michelle can simultaneously bite into a shiny Gala apple, on live TV.

Michelle can highlight the problem of America’s couch potato; soda pop and video games addicted children and at the same time address a backslidden governor shamelessly sitting there with cheesecake smeared all over his jowls.

Midway through the show, to boost ratings, a bicep bare Michelle Obama can play Sergeant Carter to Mike Huckabee’s, Gomer Pyle and whip “Jim Nabors Huckabee” into shape with a Frank Sutton rendition of Marine Corps level hula-hooping – demonstrated by a woman with a physique characteristic very few would argue doesn’t provide an unfair advantage.

Pretending not to be portly, Mike Huckabee said he “commends” Michelle Obama for taking on the problem and recognizing that it is not a “crisis of the month.”  Which is true–Michelle’s appearance on a station formerly untainted by Obama political posturing constitutes my personal “crisis of the month.”

The only thing that could make the whole scenario more unbearable would be Michelle agreeing under duress to join the Little Rockers for an impromptu rendition of the Yes We Can Obama Song by will.i.am, while jolly Mike Huckabee keeps perfect time on the bass guitar.