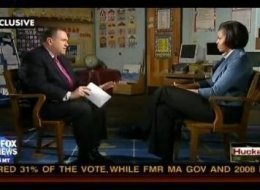 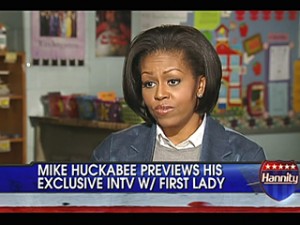 The highly touted Michelle Obama/Mike Huckabee Fox News interview is over and the text of the transcript has been made public. Other than Mike mentioning the “horrors of our political climate today,” the dialogue was extremely courteous. Nevertheless, nestled within the discussion were revelations that an overly gracious Huckabee failed to address.

Michelle began the interview by telling the former Arkansas governor that the family’s pediatrician warned that the body mass indexes of Sasha and Malia were ticking upward. In response, the first lady said the family ate out less often and she cooked “a little bit more.” A tiny bit of pre-interview research would have revealed Michelle wasn’t the cook in Chicago; Sam Kass was. Kass, a healthy cooking specialist, worked in the Windy City as personal chef for the Obama family and is presently on the White House staff at the behest of the Obamas.

Just a few months ago the liberal press trumpeted the scandalous revelation that Sarah Palin“didn’t cook for her family.” Truth is, Palin got rid of the state-paid chef at the governor’s mansion in Juneau and was featured in Esquire magazine giving grandson Tripp’s father, Levi Johnson, a tutorial on how to marinate a roast. Governor Palin dismissed a gratis chef, but is branded as someone who doesn’t cook for her family. Meanwhile, Michelle Obama’s less than forthright family cook comments go unchallenged by Mike Huckabee.

Further along the interview trajectory, Michelle told the the former governor: “Families don’t even know how modern-day life has really changed the way our kids move and eat.” Huckabee forfeited an opening to challenge Mrs. Obama to expand on what it is she believes Americans “don’t know.” Interspersed throughout the interview was the underlying thread suggesting Michelle believed Americans are basically simpletons in need of a bureaucratic schoolmarm.

Huckabee gave the first lady a gratuitous opportunity to defend against “Let’s Move” policy critics.  Mike said: “Some say, ‘Oh this is going to lead to a nanny state. The government telling us what we can eat.’ Are those fears fair, or are they unfounded?”

Michelle contended “Let’s Move” is not about bureaucratic intrusion, but then expressed the sentiment that altering school lunch programs presents opportunities to “work with the federal government.” Huckabee failed to retort with the obvious question: if government sponsored school lunch programs contributed to the obesity problem, why would those who helped cause the crisis suddenly be trusted to produce positive results?

Mike addressed Michelle’s many references to “we” with “who is the ‘we’?” Mrs. Obama countered with: “We is all of us.” It’s parents (whom Michelle believes don’t know what’s going on), coaches (in the public school system), and “it’s Congress” (who no one would ever accuse of wanting to control our lives). According to the first lady, “we” also includes industry providers who make soft drinks (which will be regulated by the nanny state), school lunch programs (financed by the government), and even the media (which is controlled by the FCC and hopefully will be reigned in further by theFairness Doctrine).

Mrs. Obama further stressed, “Families need to work with their pediatricians and their family doctors so they’re all talking about the same issue; they’re looking for the same sign.” I have a question for Michelle. Are you referring to the doctors Barack’s health care reform bill intends to control?

Michelle continued: “It’s not just telling a parent, you need to make some changes, but it’s giving them a prescription, a step-by-step guide to what they can do.” Maybe Huckabee should have asked her who would be writing the “prescription.” This is an important question based on the president’s health care proposal, which is poised to give government unfettered influence over prescription disbursement.

Michelle went unchallenged throughout the interview by the affable Huckabee, whose dimple didn’t get smaller for lack of smiling.  Not once did Huckabee ask why 23.5 million Americans living in “food deserts” have a chubbiness problem. Typically, people starve to death in a desert — they generally don’t expire from corpulence.

Probably the most stunning admission in the interview came when Huckabee posed a Katie Couric-like inquiry that sounded strangely familiar. The talk show host, breaking down bipartisan barriers with unique charm, queried Michelle by coyly posing the question: “I have to ask you — do you ever watch Fox News?”

Mrs. Obama replied in earnest: “I try to stay away from, you know, news because, you know, I want to formulate my opinions based on experiences that I have.  So, you know, I’ll read clips. You know, I get headlines, but I tend and I try to keep home kind of a news-free zone.”

Huckabee could have inquired further by pressing for an answer to the question: “What headline clips specifically?” To which, like Sarah Palin, Mrs. Obama could have responded, “Um, all of them, any of them that have been in front of me all these years.”

Then Huckabee may well have asked the notably well-versed first lady if she could name “name a few.” After which, Michelle might have awkwardly changed the subject and expounded on the value of cozy dinners and family game nights playing Sorry! Such an exchange could have given America additional insight into Michelle Obama’s intellect or inspired additional Tina Fey skits.

So there you have it. The first lady heads an initiative to influence “cultural transformation” in America. Michelle intends to shimmy her way into every school, television set, neighborhood, pantry, and refrigerator in America and do so without the benefit of reading newspapers. If nothing else, Mike Huckabee’s interview shed light on why Michelle Obama, as first lady, remains clueless.

Maybe Michelle Obama needs to pick up a newspaper now and then to find out that most Americans would choose living in a “food desert” to having bureaucrats make menu choices for them.