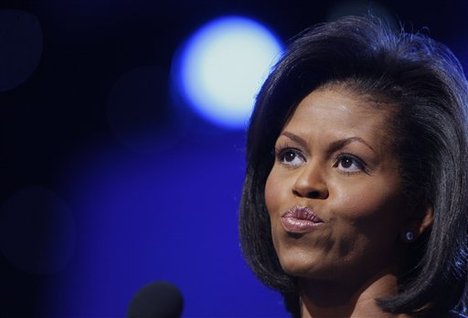 Resplendent in flowery haute couture and hugging her way through Mexico, the FLOTUS brought the message of class warfare and socialism directly to the children. Mexican youth, who used to want to cross the border in search of the American dream, heard America’s First Lady Michelle Obama speak a message similar to the one an affirmative action officer might deliver prior to interviewing potential candidates for employment.

First Lady Michelle visited Mexico to address youth diplomacy.  Immediately honing in on unification, Michelle told the children, “Well, I think there are different messages to different types of young people.”   Separating children by class identification, Michelle called out children who, “…have every advantage in world,” reminding them, “that when you get a seat at the table make sure you’re reaching out, reaching down, and reaching across to pull other young people up who struggle more.”

Michelle never did quite explain the definition of “struggle more.”

In a nation ravaged by poverty-driven drug trafficking and crime Mrs. Obama put the majority of children who come from what Michelle defines as, “more challenging backgrounds,” on red alert reminding the less fortunate they’re owed something, just by nature of being poor.

Breaking ground for the socialist belief that government should pay for education Michelle spoke to 3,000 young adults at the Universidad Iberoamericana an elite university, run by the Society of Jesus many of whom have been know to dabble in Marxism and liberation theology.

Preaching to the choir, honorary S.J Michelle Obama. “quietly took nations, governments and societies to task for their failure to deliver on what she has described as the rights of all youth to be educated, nurtured and inspired.”

Michelle stressed “maybe” poor kids may have to “work harder…be smarter…and not to give up.” But then again maybe not–because if work, intellect and perseverance don’t pay off the privileged kids will be there to, “reach out, reach down, and reach across”—whatever that means.

In Mexico the First Lady “challenged the world’s vast population of young people to make history and to take ownership of some of the globe’s most daunting challenges.” Exhorting them to care for the environment and end wars. Contributing to ending global strife Michelle felt compelled to further stress economic, gender and religious inequity, discrimination against the handicapped, as well as the continued injustice of socioeconomic disparity.

The First Lady addressed how opportunities afforded from free education could be the answer to ending escalating gang violence and drug trade. Intimating drug use and trafficking result from lack of opportunity, the FLOTUS said, “”If young people don’t have an alternative in their lives, whatever country they’re in, they’re going to choose drugs, they’re going to choose (the) drug trade. That’s the way they make money.” True it’s either drugs or extorting resources from the privileged.

Pushing a socialist message on poor children by comparing roots in Chicago to impoverished residents of Ciudad Nezahualcóyotl, Michelle Obama proved that “time and again [those without conscience] can be found in some of the most unlikely places” and, without a doubt, both Shelley and Barry “are living proof of that.”