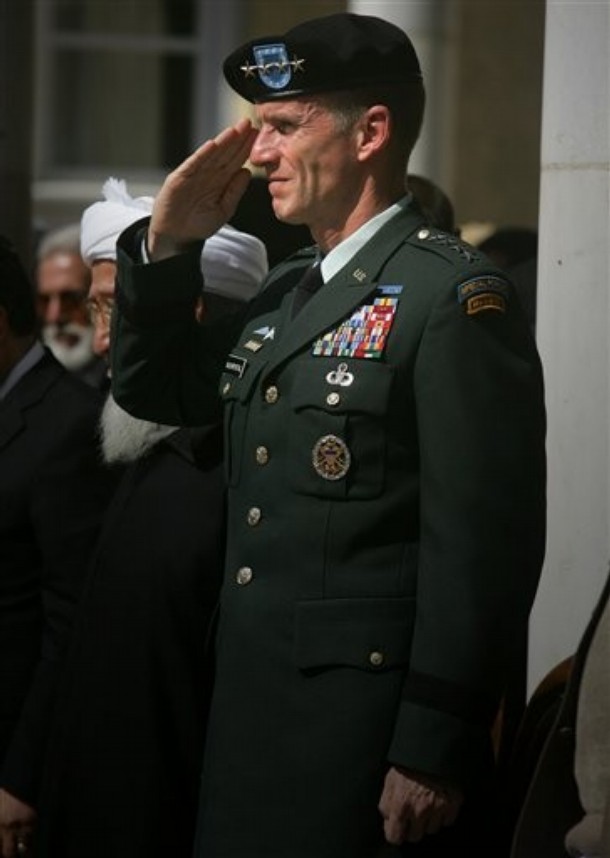 Over the past few days it’s been difficult to understand how a soldier and man of honor like Army General Stanley McChrystal could let his guard down in the presence of left wing Rolling Stone reporter Michael Hastings. McChrystal is a trained officer, disciplined to abide by a code of honor that does not include sloppy disregard or behavioral lapses that destroy lifetime accomplishments or topple generals from the pinnacle of military careers.

One of the big questions people are asking today about Rolling Stone‘s stunning story about General Stanley McChrystal is this: How could he have said all that to a reporter?Rolling Stone maintains absolutely that all comments were on the record. So honestly:What was he thinking?

It’s difficult to believe a man who proudly served for 34 years in the military would recklessly chance being disgraced and dismissed by a President he secretly disrespects.  How could a decorated General allow himself to be humiliated before the nation he loves and serves? Unless McChrystal’s supposed blunder was actually a planned tactical maneuver.

Viewed by most as poor judgment, many remain puzzled.  Confusion abounds because it’s “mysterious why McChrystal chose to cozy up to a magazine that strove to maintain a countercultural DNA and hard-hitting reputation. Some suggest it may be a reflection of [McChrystal’s] boomer status and respect for an old brand. Others remain baffled.”

General Stanley McChrystal is weighed down with decorations, commendations, and military achievements including being credited with hunting down and killing the leader of al-Qaida in Iraq, Abu Musab al-Zarqawi.  Yet the courageous General was summoned from Afghanistan by a man-child playing Commander-in-Chief, like a naughty juvenile, for a face-to-face talking to. Is the nation supposed to believe a 4-star general who’s been called Obama’s “true warrior” is nothing more than a loose-lipped frat boy?

Could it be that as a military general McChrystal sees Obama as a peril to America’s freedom and security? Though appearing disgraced, in truth, being dispatched by a vindictive, oversensitive Obama may have handed McChrystal a decisive victory in an important strategic battle. By allowing the enemy into the camp, the General may have shrewdly used Michael Hastings as a courier to send a message heard round the world.

Army General McChrystal may have willingly forfeited his stellar military career to alert America they are being led by a disappointing imposter who, in the midst of a war, isn’t all that concerned or “engaged” in anything but position, power and prestige.

If Stanley McChrystal’s statements to Rolling Stone magazine were preplanned, the disapproving comments about the President made by the General and his aides may have been a premeditated vehicle used to confirm for the uncertain what a feeble, thin-skinned man Barack Obama is.

Even the media recognizes “the way Obama fired McChrystal was choreographed to humiliate the general and bolster the President’s credentials as a macho man. So much for ‘no drama Obama.’ The manner of the firing came dangerously close to putting political theatre and image-burnishing above the conduct of a war.”

Mortified, dishonored, ruined?  I think not. General McChrystal may no longer be commanding the troops in Afghanistan, but his act of valor may very well have won the war here at home. Army General Stanley McChrystal may have taken a bullet, but crawling through the trenches on his belly the wounded patriot managed to set off a warning flare alerting America it is presently under presidential siege.