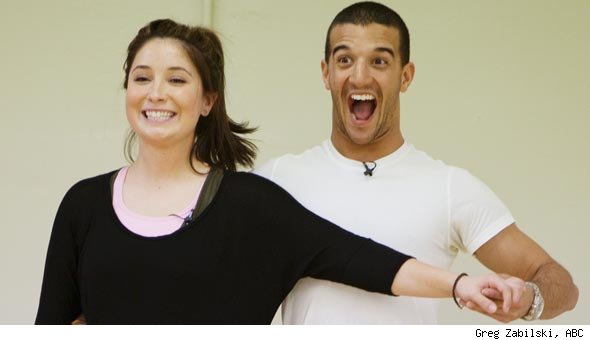 For the past few weeks I’ve actually watched “Dancing with the Stars.” For 10 whole seasons, I willingly passed on the nation’s paso doble pastime. Frankly, as far as I’m concerned, all the preening, shimmering tassels and women in bikini bottoms flipping dyed hair around have little to do with dancing and everything to do with ratings.

For me, it was downright unbearable to watch former co-host Samantha Harris make googly eyes at the camera, hand it over to “Tom,” or laugh hysterically at private jokes.  In addition, I could never understand why the female dancers, who were supposed to be showcasing the males, demanded so much attention by appearing on the parquet partially naked.

Who can forget Tom DeLay in brown bell-bottoms dancing to “Wild Thing,” grinning maniacally as Cheryl Burke shimmied non-stop around the ex-House Majority Leader? My impression was that the only thing missing from the middle of the floor was a pole for 10-season flat-belly favorite Edyta Śliwińska to demonstrate an outside leg hook climb.

However, this season I just couldn’t resist.  Why?  Because Bristol Palin was one of the “stars” America would be dancing with.  My initial response to Sarah’s baby girl, famous for having a baby boy, being a featured dancer was “Girl, what are you thinking?”

Then, after I thought about it, I realized that Bristol is definitely her mother’s daughter – fearless and unflappable.  Bristol Palin is an in-your-face, I-could-care-less-what-you-think-of-me kind of person, and I say: “Bravo Miss Bristol!”

I’m a fan of Bristol. Unmarried and swollen with child, Bristol did not shy away from the stage at the Republican National Convention. While bouncing tow-headed Tripp Easton Mitchell on her knee, Bristol stepped out as an activist reaching out to teens on the subject of waiting until marriage for sex.  At 18 years old, Bristol Palin willingly accepted responsibility for forfeiting her chastity at a tender age and chose to raise her baby as a single parent.

Bristol agreed to dance on national television and never once let lies or demeaning allusions stop her from counting herself an equal among “stars.” Bristol is a kid who’s been maligned, made fun of, laughed at, and humiliated by the immature, shallow, star-struck Playgirl centerfold-posing father of her son.

After enduring two full years of unrelenting derision, imperturbable Bristol agreed to appear on “Dancing with the Stars,” and did so while toting a 21 month-old son to rehearse with handsome dance partner Mark Ballas.

As if that isn’t enough fodder for the grind-up-Palin gristmill, Bristol’s choreographer conjured up an incendiary debut dance which, without a doubt, mother and daughter agreed to. Dressed up like Sarah, Bristol cast off her conservative gray suit to reveal a red dress, unfurled her brunette hair, and then proceeded to execute an exuberant prime time Cha-cha.

After subjecting America to 10 full seasons of unending bawdiness, the media honed in on Bristol and described her first turn around the floor to “Three Dog Night’s Mama Told Me (Not to Come)” as a “raunchy debut.”   Yet while the world sniggered, from the looks of Bristol’s first appearance, America’s Momma Grizzly and baby hoofer were the ones doing the laughing.

As the whole nation gawked, Bristol tore off a stylish suit fashioned after Granny Sarah’s Naughty Monkey wardrobe, which sent a message far removed from Bristol’s dancing prowess.  Palin-the-younger not only broadcast contempt for critics, but as a proxy for Mom sent a clear message about how Alaska’s famous family views trivial media types.

Strutting out on the dance floor, a gutsy Bristol gave spectators plenty to criticize, beginning with the song of choice and finishing up with a provocative raised-leg lean against Ballas’ thigh.  Bristol Palin, who might as well have been boogieing to “Let’s Give Them Something to Talk About,” provided media piranhas with lots of fresh meat and the flesh-eaters took the bait.

One headline read: “Bristol Palin’s striptease ‘Dancing with the Stars’ Debut.” Another judged Bristol’s appearance in the following way: “Bristol Palin’s ‘Dancing with the Stars’ debut mocks mother Sarah as she watches from Alaska.”  The latter article went on to say, “Bristol brought plenty of sexy to the cha Cha-cha, shaking her hips and indulging in some hairography. She and her partner cradled each other’s faces and, at one point, Ballas even grabbed her tush. To top it all off he gave his partner a big kiss.”

As an aside, didn’t any of these people catch “sex bomb” Pamela Anderson smoking up the “Dancing with the Stars” dance floor while attempting to do the Cha-cha in an outfit that may have been missing undergarments?

The Daily Mail online suggested the whole routine was foisted on Bristol, who was too naïve to make the connection.  The article asked, “whether [Bristol got] the pointed innuendo is unclear, but it may make for an uncomfortable listen for her conservative mother.” As if the performance caught Sarah unaware.

I’m glad I decided to tune in to “Dancing with the Stars” to see Bristol Palin, because the Cha-cha was Bristol’s least impressive achievement. The “pointed innuendo” comment proved it wasn’t Bristol but the media that failed recognize that the joke was on them.  Media scrutinizers, chomping at the bit to critique all things Palin, suggested an adolescent Bristol was exploited when, in fact, Bristol played the media. Just like the supposedly slow-on-the-uptake Sarah, while pretending to do the Cha-cha an unflustered Bristol stomped all over the critics, and did it handily.  In fact, to the amazement of Palin haters, Bristol has made it through 2 weeks in a row.  Go Bristol!