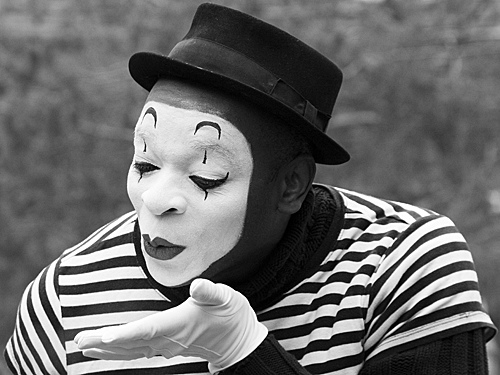 In Jakarta, Indonesia, Michelle Obama decided to further Muslim outreach by singlehandedly doing what Obama suggests, which is “creating more people-to-people contact.” The First Lady cast etiquette aside and physically exhibited “great affection for [the] people of Indonesia” by improperly clasping the hand of pious information minister Tifatul Sembiring.

Apparently, “dancing queen” Michelle was so busy busting up the dance floor in India there was no time to receive a proper briefing on Indonesian protocol and Islamic decorum.

Arriving in Jakarta, Michelle was obviously unaware that devout Muslim men are prohibited from touching women other than immediate family. As a result, a controversy now surrounds Mr. Tifatul Sembiring, a sanctimonious man of faith, who on a receiving line was caught gripping the First Lady’s hand between two virtuous palms. What happened? Didn’t anyone inform matka-master Michelle to avoid ensnaring Muslim men in spontaneous hand-to-hand clinches?

The Islamic information minister, renowned in Indonesia for priding himself on his conservative Muslim faith, after the close encounter of a female infidel kind refused to take responsibility for the interaction. Instead, Tifatul chose to blame Michelle for initiating what he called “forced contact.”

Excuses aside, Tifatul succumbed to temptation. In fact, listening to Sembiring explain his fall from grace one would think he was Adam in the Garden of Eden telling God, “The woman you put here with me–she gave me some fruit from the tree, and I ate it.”

Mr. Sembiring told critics “I tried to prevent [being touched] with my hands but Mrs. Michelle held her hands too far toward me [so] we touched.”

In Indonesia most Muslims practice a more relaxed version of the faith and allow “casual contact between the sexes.”  Touching the First Lady’s hand has set fundamentalist Sembiring up for criticism from moderate Muslims who now claim the information minister’s excuse displays a double standard by a man who “excuses the sort of conduct [in himself] that he readily castigates in others.”

Well, what do you know – Michelle and Barack and words like “double standard,” “excusing personal behavior,” and “chastising others” strung together and sounding strangely familiar.

Despite the First Lady’s enthusiastic ignorance, former resident of Jakarta Barry Soetoro did not hesitate to express first-hand knowledge of the type of Indonesian diversity no one bothered to explain to his wife.  Barry also expressed “great affection for the people” of Indonesia which, if given the chance to explain, was likely the root cause of Michelle’s demonstrative conduct on the reception line.

Nevertheless, after the handshake hoo-ha and after visiting Jakarta’s Istiqlal Mosque, Obama went on to reassure the Muslim world by saying, “I think that our efforts have been earnest and sustained. We don’t expect that we are going to completely eliminate some of the misunderstandings and mistrust that have developed over a long period of time, but we do think that we’re on the right path.”

Could the “misunderstanding” portion of the President’s speech be even remotely related to the “mistrust” generated by the boorishly unconcerned-with-religious-mores Michelle who reached out and touched, with misplaced Western friendliness, the warm flesh of a Muslim man?

Either way, based on information minister Tifatul Sembiring’s contention that “moral failings” are to blame for “natural disasters” and after the debauched handshake incident, maybe the President should ask his wife to apologize to the Indonesian people for a recent tsunami and ongoing volcanic ash raining down all over Jakarta. Moreover, after the two earthquakes occurring soon after the Obama’s arrival, Indonesians should thank the good Lord above Michelle gave Tifatul a handshake instead of a kiss.