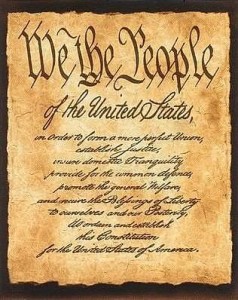 That’s right – the Radical Republicans plan to open Congress by reading the Constitution on the floor of the House. Newly elected legislators are planning to drag out the source document to remind Congress what guidelines should be adhered to when imposing legislation on the American people.

Democrats, who have an affinity for passing bills without reading them, may very well run toward the escape exits when the reading commences.  What could be worse than having a standard held up that proves nothing you’ve done for years even comes close to resembling the type of governance laid down in America’s founding document.

Those backing the plan said the goal is to “underscore the limited-government rules the Founders imposed on Congress – and to try to bring some of those principles back into everyday legislating.” Does that mean revisionist Democrats are going to have to actually listen, or will the Republicans allow conscientious objection?

The rabble rouser extremist who came up with the idea, Robert W. Goodlatte (R-Va), said the proposal “stems from the debate that we’ve had for the last two years about things like the exercise of authority in a whole host of different areas” from the EPA to health care to cap and trade.

Godlatte said:  “This Congress has been very aggressive in expanding the power of the federal government, and there’s been a big backlash to that.”

No offense to Congressman Goodlatte, but adherence to the letter of the law isn’t exactly the Left’s strong suit.  Even if Democrats know what the Constitution says, the copy they prefer is the “not deeply flawed” edition.  Liberals cling to a newfangled “living-breathing” Constitution, marked up and made up as they go along. How else could the Left justify bad law like Roe v. Wade? Liberals contend that the guidelines set forth by a group of angry-white-male slave owners need revision, not revisitation.

In fact, the Constitution is why Obama is on the “defensive over the new health care law.” Democrats were so busy drafting the health care bill they had no time to heed bothersome clauses, especially those that would prevent the Left from transforming the nation into a centralized system that rejects the basic tenets laid down in what they consider an antiquated document.

In Obama’s revisionist world, “sharing the wealth” takes precedence over the Constitution. So when an unsubmissive “federal district judge in Virginia ruled … that the general welfare and commerce clauses do not give the federal government the authority to require individuals to purchase health coverage, under pain of a financial penalty,” the Left, true to form, immediately attempted to discredit the judge.

Thus, Liberal reaction could be extreme. Let’s face it – reciting the US Constitution to Democrats would be like forcing Madalyn Murray O’Hair to participate in a prayer meeting.

Establishing the 112th Congress upon a Constitutional foundation could incite a reaction in Democrats similar to Regan in the Exorcist being splashed with holy water.

However, there is an upside. One or two lines into the recitation and the minority party will probably run from the House floor and crash through the double doors, holding their ears, screaming and begging for mercy, which will make getting the nation back to founding principles a whole lot easier for Republicans.