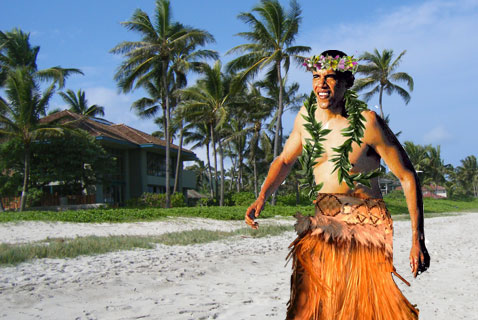 The Presidents goes home for vacation and it still ends up costing millions. Could you imagine if Obama decided to splurge and go somewhere exotic for the holidays? Not only that, but the first family does not appear the least bit concerned about how a nation of unemployed Americans with foreclosed homes feels about he President callously flaunting the high life in the faces of families whose children asked Santa for coats instead of toys this Christmas.

Here we are, a few days after the start of another year of predicted financial misery, and the Hawaii Reporter comes out with an expose on the cost of the Obama yuletide getaway. The running list of expenses includes about $1 million in travel expenditures plus Michelle’s early $63,000 one-way flight, and approximately $150,000 for housing Secret Service, Navy Seals, and White House Staff, not including extraneous hotel costs and meals.

For security, the Honolulu Police Department reported that the Obama’s 2009 Hawaiian Christmas luau cost $250,000 in overtime and, in case anyone chokes on a hunk of roasted pig, A $10,000 ambulance stands ready for emergency CPR. In addition, there are other expenses that cannot be officially verified, which will contribute to the estimated $1.47 million bottom line.

For accommodations, the Obamas chose “to secure use of three luxury beachfront places.” The facility, the Hawaii Reporter noted, normally rents for an “estimated $3,500 a day or $75,000 a month,” which is a pittance if it’s financing a well-deserved respite from coming up with ways to inflict mayhem on America.

The “Winter White House” is a “7,000 square foot home [that] features 5 bedrooms, 5 ½ bathrooms, a media room with surround sound, a kitchen suited for a master chef, a dining room and great room, a secluded lagoon-style pool with tropical waterfalls and a lavish island spa. The ocean lanai and garden lanai showcase ornate landscaping and stunning views of Kailua Bay and Mount Olomana.”

The Hawaii Reporter noted that the Obamas “could have chosen a less expensive and more secure place to stay such as a beachfront home on the Kaneohe Marine Corps Air Station – just a two-minute drive away from the Kailuana Place property where they are now,” which would have lessened the price tag considerably.

White House shills insist, “Obama’s vacation expenses are in line with those of previous presidents.” The glaring hypocrisy is that there has never been a president who has more aggressively demonized the wealthy than Barack Obama, who said about banking CEOs: “You can’t get corporate jets, you can’t go take a trip to Las Vegas or go down to the Super Bowl on the taxpayer’s dime.”

Viewing himself as an exception to his own rule, Obama obviously feels no price is too high to ensure that he and his Chicago friends and family enjoy leisurely downtime frolicking on the beach, golfing, and eating wonton soup at “the award-winning eatery,” Alan Wong’s Restaurant.

Isn’t it odd how the Obamas make a habit of traveling with a huge entourage on “family vacations” and then invite restaurateurs to come to Washington DC to cook for parties? In fact, Obama and the First Lady even “invited Wong to cater a luau at the White House.” What are they planning, a commemoration party in honor of Christmas in Oahu?

Either way, the taxpayer cash register keeps cha-chinging away as the President, who was scheduled to return January 2nd, has decided to return on January 4th. This way, for only a couple of hundred thousand dollars extra the Obama contingency can rest up after the New Year’s merriment before jetting home to make preparations for the Alan Wong White House luau.