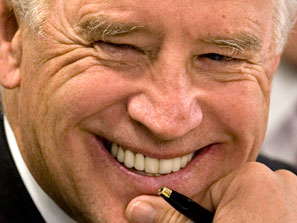 In liberal circles, it’s believed that conservatives are intellectually challenged and the left are just, well they’re just smarter, better informed and more perceptive about everything.  Ask a liberal and they’ll tell you that high levels of gray matter, or lack thereof, is what determines political persuasion.  Progressives are of the opinion that the mentally unsophisticated lean right and those blessed with an abundance of gray matter are naturally predisposed toward the left.

Even the uneducated, inarticulate and uninformed believe identifying with liberalism secures an automatic position at the top of the IQ charts, a pair of horn-rimmed glasses, and a complimentary subscription to the New York Times.

The left side of  “The View” couch touts superior intellect, as does much of the leftist Hollywood elite crowd, which includes learned minds like Cher, Michael Moore, Rosie O’Donnell, Sean Penn, Oliver Stone and of course Intertel wannabes like the warm and cuddly Janeane Garofalo.

This group which, by the way, is quite extensive, have forged lucrative careers pointing out the poverty of brainpower evidenced in individuals such as Sarah Palin and George W. Bush as well as the entire American electorate.

This is also true in politics. Based on an impressive ability to deceive the masses with charm and rhetoric, Rhodes Scholar Bill Clinton is extolled as America’s bony-fingered genius.  Bill’s brighter half, Hillary, the supposed “smartest woman in the world,” was able to detect an obscure “vast right wing conspiracy” on mental power alone.

Then of course you have Barack Obama.  Barack is so intellectually gifted that Columbia University couldn’t find a grade high enough to award the man. Instead, throughout his college career institutions of higher learning chose to forgo subjecting him to their inferior grading systems, which must explain the missing transcripts.

When discussing liberal intellect, Vice President “Three letter word…J-O-B-S” Joseph Robinette Biden should not be excluded from the conversation.

Unfortunately for liberals, when Joe speaks, besides geniality, brutal honesty, average aptitude and inability to consistently articulate coherent thoughts, what is exposed is a liberal tendency to accept in some people what is fodder for the mockery of others.

When it comes to Joe, it’s a “big f______ deal” to hand the man a microphone or, for that matter, to allow a microphone within 500 feet of his lips if they’re moving. Biden has proven to be the world’s most candid politician, which explains why liberals keep Biden around; in comparison to their blathering, Joe helps twisted truth appear intelligent.

Void of measured consideration, Joe is famous for exposing the innermost recesses of his own thought processes. Take for example the Vice President sharing insights on Obama’s $900 billion stimulus with members of the House Democratic Caucus.  It was there that Biden blurted out, “If we do everything right, if we do it with absolute certainty, there’s still a 30% chance we’re going to get it wrong.”  Oops!

Even with practice, Biden’s ability to think before speaking appears to be getting worse, not better.  Prior to the historic 2008 election, Joe was so worked up on the campaign trail that he referred to Obama as “Barack America.”   The Vice President even exhorted paralyzed US Senator Chuck Graham to “stand and let … people see you.”

With Biden, authentic gusto oftentimes overrides prudence, like when a pumped up Biden disregarded confidentiality and, without further explanation, blurted out that he, Michelle, and Barack had all been tested for HIV/AIDS. Maybe if liberals want to maintain credibility it would be best if people like Stephanie Miller refrained from calling Sarah Palin an “idiot.”

The left laughed it off when Biden beseeched St. Patty’s Day blessings on the deceased mother of a world leader who was still very much alive. They chuckled when at one event Joe gave a shout-out to state senators who weren’t even in attendance, and when he confused automotive company Ener1 with disgraced energy corporation Enron.

More recently, while representing the United States in a diplomatic capacity (have mercy dear Lord), during a visit to Moscow Biden pulled a Bush in Australia.  Mr. Biden “mangled the name of Russia’s most famous prisoner Mikhail Khodorkovsky.”  The result: a stammering Biden once again pardoned for what brought Bush relentless humiliation.

Advocating for human rights on behalf of business entrepreneur/democracy-loving political prisoner Khodorkovsky, Joe “barked” out: “Over the past few months our administration has spoken out against allegations of misconduct in the trial of… of, uh… the, um… excuse me… Khodor… Kovinsky.”

After receiving “more giggles than rounds of applause,” Joe was clever enough to muster “a self-deprecating joke,” which “instantly endeared” him to the audience.  Once again, with nary a peep from the left, Biden was given a liberal pass for an understandable slip-up that, if he were a conservative, would have been mocked with gusto.

Wasn’t G.W. Bush’s lack of intelligence alleged because of his tendency toward improper pronunciation? Yet, based on party affiliation, Joe is not and never will be held to the same stringent garbling standards as George.  The left have set the pronunciation/intelligence bar so high that every time the Vice President opens his mouth to speak the unintended consequence is that both his handicap and liberal hypocrisy are simultaneously exposed.

The Vice President is viewed by double standard-bearing liberals as nothing more than an adorable gaffe machine.  The brainy New York Times even called Joe Biden “experienced, serious and smart,” proving once again that when measured against the standards set forth by liberal self-appointed whiz kids, Joe Biden is a genius.