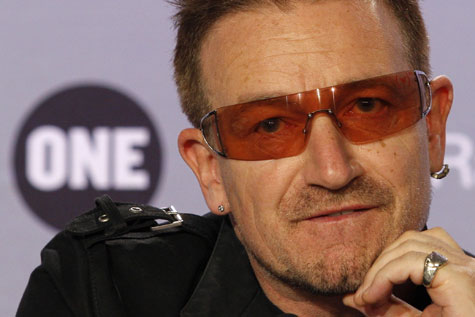 The arrest of 30 angry anti-capitalists from Art Uncut, the group who busted up a U2 concert at Glastonbury 2011 while toting a huge balloon insisting “U Pay Your Tax 2,” indicates that people are fed up with being dictated to by socialist-minded do-gooders who talk the talk but, in their own lives, refuse to walk the walk.

The target of Uncut’s “Pay Up” ire is U2’s lead singer Bono, a man who entreats international governments to support global aid organizations, but who allegedly refuses to contribute his share of the taxes needed to fund the good works he supports.

With the help of rock stars and Hollywood collectivists, Marxist-minded politicians have hammered home the message that only by “sharing” can a person truly be caring.  Without realizing the ramifications of the share-the-wealth philosophy, those who’ve worked hard to portray capitalism as evil and promoted the merits of reordering the economic structure have managed to invite turmoil down upon their own heads.

Presently, the message to pay up is being directed towards anti-capitalists whose extravagant hypocrisy is being called into question by the very people they’ve indoctrinated.

It’s the same story everywhere: the little people have shame heaped upon their heads for not doing enough, giving enough, caring enough and above all not sharing enough.  In the name of fairness and good will, those with plenty have insisted that those with less take a smaller and smaller piece of the pie while the ones doing the asking sacrifice little or nothing.

Apparently, this is the case for a global activist and passionate defender of the downtrodden who lives in a country presently on the brink of bankruptcy – Paul David Hewson, lead singer and famous face of U2, better known as Bono.

While he’s bringing “Hope to Haiti,” someone should inform Bono that mother country Ireland “has already accepted an international bailout, is suffering through deep spending cuts, tax hikes and rising unemployment as it tries to pull the debt-burdened economy back from brink of bankruptcy.”

The question is: Why would one of country’s wealthiest citizens deprive his homeland of the millions in Euros that would assist Ireland’s struggling economy? How does one accept kudos for fighting poverty while avoiding paying taxes?  The answer is easy – for liberals it’s all about symbolism.

Collective do-gooders push government-enforced altruism on others while exempting themselves.  Many are legalists who, like tainted preachers, use the world as their pulpit and righteous causes as vestments.  Many are hypocrites who hammer the global congregation into submission by legislating a type of philanthropic morality they seldom live themselves.

It’s alleged that offstage, U2 band members spend time scurrying around trying to find ways to keep every penny of $720 million they’ve earned for themselves. Supposedly, to accomplish that goal, in 2006 U2 moved “much of its business affairs from Ireland to the Netherlands. That move came after the Irish government reduced tax breaks for income earned from ‘works of artistic merit.’”

Bono campaigning against poverty while seeking to find creative ways to pay less in taxes is not going over well with people who’ve been victimized by overbearing tax systems instituted to assist in creating the world vision Bono believes in.

The duplicity is stunning, because Bono co-founded a UK group called “One International.”   One does not solicit contributions from the public, but pressures people to call political leaders into account for their commitment to implementing anti-poverty policies.  The website includes touching stories called Living Proof, tales that celebrate “incredible progress being achieved by some of the world’s poorest people,” thanks to “governments’ backing.”

Could it be that Bono is unaware that fighting the fight against “extreme poverty,” which is a laudable goal by anyone’s standard, requires the contribution of tax money if government is the answer to the problem?

Yet, in all fairness, people like Bono are really victims themselves, placard carriers who thrive on having an image perceived to be a force for good. These famous people play music at ‘We are One’ Inaugural Concerts for presidents who believe in “spreading the wealth,” but when presented with the opportunity to contribute to the “oneness” they profess, they look for ways to protect private assets.

Truth is, Bono is more to be pitied than censured.  Without fully realizing it, the U2 front man is a soft-core sympathizer of Marxist philosophy.  At the top, people like Bono are viewed as “useful idiots,” public figures whose fame can be used to send musical messages that more sacrifice is required to usher in true social justice, so as to inflict guilt on the proletariat.

Art Uncut spokesman Steve Taylor, proud anti-capitalist proselyte and U2 protester, said “The money that’s nestling in U2’s bank account really should be helping to offset some of the pain that the Irish are experiencing at the moment,” a sentiment Mr. Hewson would probably applaud if Taylor were talking about a bank account that wasn’t his.

Despite hard times, the group U2 has no problem collecting £195 plus booking fees from 170,000 concertgoers to perform at the sold-out Glastonbury 2011 “extravaganza.” The concert includes sets by “Morrissey, Mumford & Sons, Coldplay, [and] Beyonce” as well as others who likely believe social justice can be achieved by using other people’s money.

Luckily, at the concert “Rubber boots [were] the fashion item of choice after heavy rain turned the 364-hectare site into a mud bath.” The boots will definitely come in handy when the reapportion-the-wealth-for-thee-but- not-for-me muck and mire starts to pile up, as it surely will.

Nevertheless, we see that double standards continue to prevail in the world of do-gooders, as exemplified by Bono, a man whose “Mysterious Ways” include promulgating equality and social justice while living like a dedicated capitalist.  Bono asks governments to contribute to addressing world poverty, but looks to avoid taxes and turns out to be just another in a long line of well-meaning albeit hypocritical activists “Trying to Throw [their] Arms around the World,” but doing it with other people’s money.