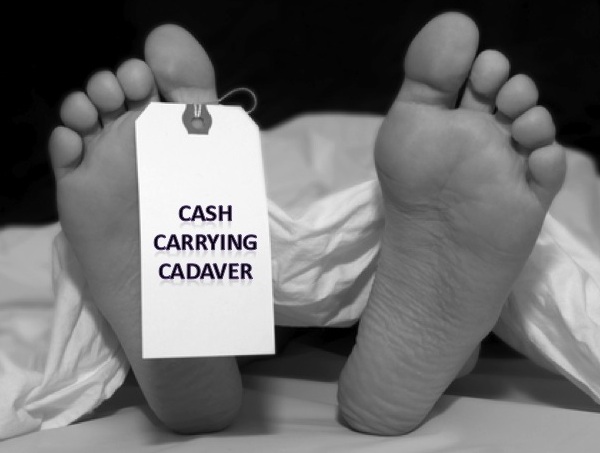 With 300 million Americans about to be unwillingly herded into a healthcare system run largely by an inept federal government, is it an unreasonable request to demand, before they start playing doctor, that the feds figure out how to tell the difference between who’s dead and who’s alive?

Three years into Barack Obama’s historic presidency and a few months after the suppository called Obamacare took up residence in the nation’s orifice, we come to find out that over the better part of the last five years, half a billion dollars have been doled out to dead people.

Seems that dead people in the US are “in a better place” to receive a hefty check from the US Treasury. That’s right, if you’re short on cash, the easiest way to earn a few bucks is to die.

Apparently, $600 million in benefit payments meant for retired or disabled federal workers have been “doled out” to room temperature individuals who won’t be stimulating the economy with federally-endowed monies anytime soon.

It’s hard to believe, but “In one case, the son of a beneficiary continued receiving payments for 37 years after his father’s death in 1971. The payments — totaling more than $515,000 — were only discovered when the son died in 2008.”

Shouldn’t a prerequisite to reassuring Americans that the government is more than capable of overseeing national health care be to establish a system that accurately differentiates between the living and the dead?

It is important to mention that the decades-long cash-to-cadavers problem cannot be laid solely on the headstone of the Obama administration. However, George W. Bush did not want to play doctor with the American health care system, so it stands to reason that Barack Obama MD should be held to a higher standard of accuracy when it comes to Americans who are flat-lining versus those whose oxygen level consistently hovers around 99.

The same federal government touting the benefits of electronic health records for all Americans claims to have “tried matching the fund’s computer records with the Social Security Administration’s death records, checking tax records and improving the timeliness of death reporting.” Yet the improper payments have continued, despite more than a half dozen attempts to develop a system “to determine which beneficiaries are still alive and which are dead.”

With that kind of track record, for lack of a more efficient system Obamacare could spend six years administering barium enemas in a morgue, or end up giving melanoma patients Robitussin in place of Roferon-A ®.

Always on the cutting edge of technology, in 2009 President Obama announced a medical health record system for veterans, wherein “an electronic record would follow a service member in the military and then later in the Veterans Affairs Department’s medical system.” Obama claimed that “the electronic record keeping system will handle military service members’ administrative and medical records from the day they enter service and insure that those files are transferred automatically to the Department of Veterans Affairs when they leave active duty.”

Sounds wonderful, but out of curiosity it would be interesting to find out how many of the dead people who received part of the $600 million between 2009 and 2011 were federal workers who served in the armed forces.

Supposedly, to address the problem, the United States Office of Personnel Management “sampled its records of all recipients over 90 years old to confirm whether they are still alive. In 2009, there were more than 125,000 recipients identified as over 90 and about 3,400 over 100 years old” – individuals who, despite not having the assistance of Obamacare, managed to attain the title nonagenarian and centenarian.

Even still, in the midst of reassuring America that the government is presently well equipped to monitor life-and-death health care decisions, “both the Obama administration and Congress” are also in the process of making it a “higher priority [than it was] to crack down on improper government payments.”

Which begs the question:  If the government doesn’t yet have a system to address the problem of giving money to corpses, how is their system prepared to supervise national healthcare for 300 million living, breathing organisms? If dead people are still getting government money, it stands to reason that in the future, a few live people could wake up while being embalmed.

Shouldn’t those who feel qualified to monitor the cardiac health of America at least know how to use a stethoscope and take a pulse before manning the ambulance?

In addition to the $600 million, in the midst of establishing a nationalized healthcare system and reinforcing a failing economy, “Last year, government investigators [also] found that more than 89,000 stimulus payments of $250 each from the massive economic recovery package went to people who were either dead or in prison.”

Not to worry though, because bureaucrats believe it’s “time to stop, once and for all, this waste of taxpayer money,” which is why it is entirely possible that the $22 million misappropriation of stimulus funds could have been another well thought-out diagnostic pilot program.

In the run-up to healthcare reform, what better way to iron out some of the cash-to-cadaver kinks than for the President of the United States to purposely employ the dearly departed to help address the problem of the federal government sending $600 million to correctional centers and cemeteries?