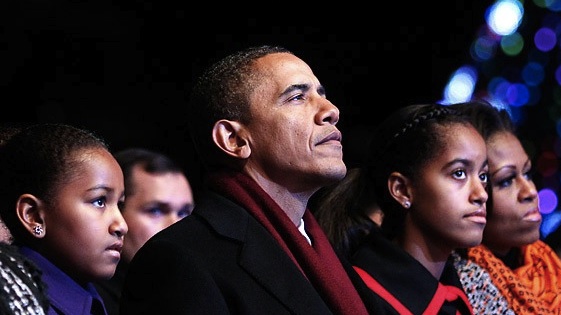 Great patriot President Ronald Reagan once said: “Each generation goes further than the generation preceding it because it stands on the shoulders of that generation.”  At the time he spoke those words, Reagan assured Americans that “[y]ou will have opportunities beyond anything we’ve ever known.”

Conservative Ronald Reagan promoted optimistic prospects for the future, and it appears as if liberal ideologue Barack Obama looks for every opportunity to suppress them.  Thus, Reagan’s impression of America as a land where exponential growth in opportunity would be passed down from generation to generation is quite different from the cataclysmic future Barack Obama’s policies are presently cultivating.  Of course, Barack’s not worried about his own kids, because “they’re on a path that is going to be successful, even if the country as a whole is not successful.”

Clearly, for political expediency, the president of the United States has no qualms about boasting of personal wealth and success if doing so instills the type of envy and fear in the American voter that foster further dependency and discourage autonomy.

Not only is Obama’s elitist prediction telling, but it’s prophetic.  Tucked within the obvious anti-American sentiment is a qualifier that exempts his family from a dire future that he believes, without liberal intervention, the rest of the nation’s children are destined to endure.

Rather than sharing a vision of America as a “shining city on a hill,” Reagan’s arrogant antithesis, Barack Obama, campaigns on the taxpayer’s dime and insists that if Republicans are in power, a dismal future awaits America.

The basis of Obama’s prediction is that if the Republican leadership gets its way, the United States is ruined and will no longer be a land of opportunity.  What Barack conveniently fails to mention is that he is the harbinger of the endemic entitlement mentality and unmanageable debt the next generation will be forced to face in place of the unlimited personal advancement President Reagan promoted.

Instead of proclaiming the greatness of America, while wife Michelle dines at trendy D.C. restaurants, Barack Obama cooks up huge cauldrons of class warfare on the campaign trail.  The president stokes the fire of support with words of societal and economic division when he boasts that “[o]ur kids are going to be fine. And I always tell Malia and Sasha, look, you guys, I don’t worry about you … they’re on a path that is going to be successful, even if the country as a whole is not successful.”

Such absurd statements are not out of character.  Why shouldn’t the Obama daughters rest in the knowledge that the same opportunities their father’s policies deny the rest of the country will be a privilege they’ll enjoy, regardless of who suffers?  Meanwhile, Mrs. Obama eats chunks of chocolate sculpture for dessert while lecturing the rest of the nation about staying away from sweets.

Both the president and his wife have been afforded every opportunity this nation could provide and then some.  Now, the thank-you America gets is the president of the United States telling a crowd of “supporters” that there is a good possibility that the country he claims to lead has the potential to not be successful “as a whole”?

Wasn’t it Michelle, recently seen dining at the oh-so-chic co co. sala lounge and boutique, who realigned Americans’ lofty aspirations by saying, “They don’t want the whole pie.  There are some who do, but most Americans feel blessed just being able to thrive a little bit…someone is going to have to give up a piece of their pie so that someone else can have more”?

Now Barack Obama claims that he fears an “America where [his] kids are living behind walls and gates, and can’t feel a part of a country that is giving everybody a shot.”  Seems the president forgot that his brand of liberal ideology discourages exactly what he’s claiming Republican policies deny.  Barack is the one pushing “thrive a little bit” policies while crowing about how, unlike other children, his two girls will be among the favored few who succeed.

Instead of bolstering generational success, the president is burdening rather than buoying future generations.  Sadly but truly, Obama is right — if he has anything to say about it, his privileged daughters will certainly do well, but if his share-the-wealth/tax-and-spend governing remains in place, the nation “as a whole” will ultimately fail.

Rather than standing tall, if Barack Obama’s “fundamental transformation” continues, the country is destined to be flaccid and weighed down, a bankrupt wilderness with insurmountable debt accrued by a president whose vision of government “giving everybody a shot” is the real reason why — unlike Sasha and Malia — most American children could face a future without a strong set of shoulders to stand upon.