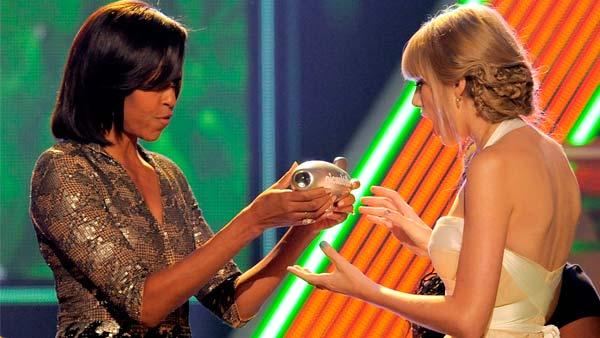 At the 2012 annual Kids’ Choice Awards, self-described ‘Big Helper’ Michelle Obama was given the honor of awarding country/pop star Taylor Swift with the “Big Help Award.”

Before proceeding, it’s important to first point out that this type of “kids’ choice” award has nothing to do with successfully throwing off the chains of parental notification or honoring underage teens who had the courage to exercise the right to choose.

This particular Kids’ Choice Award is the one where Nickelodeon viewers, via online voting, choose their favorite music, television and movie stars, who are then bestowed titles like “Cutest Couple,” “Favorite Buttkicker,” and every kids’ politically correct favorite, the “Big Help/Big Green Award.”

This year, “iCarly” random dance sensation Mrs. Obama flew toward Los Angeles with Sasha and Malia for a much-needed Vegas spring vacation and then on to L.A. for her first live appearance on the 25th annual KCA award show. A big kid herself, Michelle blended in with the crowd and joined in welcoming host Will Smith to the stage by joyously waving an orange glow stick.

Besides the anticipated slime finale that drenched host Will Smith and teen sensation Justin Bieber, the most predictable moment in the show was watching Michelle Obama actually use the opportunity to politicize a live televised kids show.

Using the stage as a pulpit, before awarding Taylor Swift the Big Help Award for selflessly helping tornado and flood victims, Mrs. Obama personalized the short introduction by injecting the standard talking points into a give-back message, the political undercurrent supporting the class warfare strategy of her husband’s re-election campaign: the rich must be forced to give back more of their income, so the suffering of the oppressed can be alleviated.  Michelle said, “I’m here because I’ve always felt an obligation to give back; to lift up others the way my parents, my teachers and mentors lifted me. And that’s something that our next honoree believes, too.”

The first lady continued by lauding the benevolent star saying:

Taylor Swift … every step of the way … always made it a point to give back. She’s supported children’s charities; she’s worked to combat bullying and given away books to schools and libraries all around the country. She’s given so much of her own money to victims of natural disasters here and around the world.

All true, none of which, by the way, were government-mandated contributions of the sort her husband demands of the evil rich.

The sweet, bubbly, obviously innocent Taylor Swift said, “I’m so honored to be receiving this award from the First Lady of the United States. I’m freaking out.”

Two years ago, via videotape, Michelle Obama, a woman known to indulge in unhealthy fare, won the same award for her work with Let’s Move, her initiative to stop childhood obesity and encourage healthy habits.

Proving once again that Michelle Obama, much like her Nobel Peace Prize winning husband, will accept awards for things she doesn’t do and will shamelessly present awards to deserving honorees for what she claims to do but doesn’t really do – a family trait that makes Michelle the perfect candidate for next year’s Kids’ Choice “Wannabe Award.”

The truth is, Miss Swift absolutely deserves an award.  Without a Barack Obama directive, last year the country/pop star “raised nearly $1 million to help victims of devastating tornadoes in the Southeast.”  She even “opened the final dress rehearsal of her Speak Now tour to a paying audience of 13,000 people, donating all the proceeds to tornado victims.”

And so, it was sort of an awkward juxtaposition to have hardworking, generous Taylor Swift receive the Big Help Award from a big-government proponent who talks a helluva of a lot about “giving back,” but who does a whole helluva a lot more talking and taking than she does doing and giving.