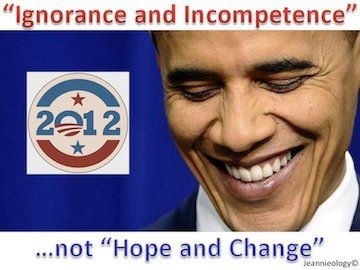 Recently at the White House Barack Obama solemnly draped Medals of Freedom around the necks of an aging rock star in sunglasses, a Democrat astronaut, a United Farm Worker/chair of the Democratic Socialists of America, and a liberal poet who had written him a letter that praised his “keen intelligence, integrity and a rare authenticity,” as well as his “creative imagination which [when] coupled with brilliance equals wisdom.”

It was during that Medal of Freedom ceremony that Barack Obama, while posthumously honoring Georgetown University professor Jan Karski, a Catholic hero of the Polish resistance against Nazi occupiers in World War II, got so befuddled that he once again managed to insult Poland.

With the way Barack Obama is racking up Polish insults, America’s Nobel Peace Prize winner seems determined to offend, forsake, and above all, misrepresent the history of one of America’s long-time allies.

It started when the President went golfing instead of attending the state funeral of President Lech Kaczynski and then blamed his absence on Icelandic volcano Eyjafjallajokull. Soon after, the President decided to sign a treaty with Poland’s archenemy Russia to remove missile shields from – you guessed it – Poland and the Czech Republic.

That slight was followed by Obama’s refusal to present the late Jan Karski’s medal to Soviet Union-defying/Polish Solidarity leader Lech Walesa. Both Jan Karski and Lech Walesa, whom the White House laughably deemed too “political,” shared a “burning desire to rid Poland of tyrannical subjugation.” Therefore, it made sense that Walesa should attend in Karski’s stead, but “President Obama said no.” Notorious grudge-holder Barack Obama probably barred Walesa from the White House because in 2010 Walesa warned that under the President’s policies the United States was “moving toward socialism.”

Barack Obama then topped off all those affronts by calling the Auschwitz-Birkenau Nazi concentration camps “Polish Death Camps.”

Recently, in the midst of rebutting what he claims is “Republican bigotry,” the President informed a group of conservative Jewish leaders that his commitment to the Jewish state of Israel should not be questioned because “all his friends in Chicago were Jewish.”

Still, if Barack Obama wants the Jewish community to believe he’s an authority on Judaism, maybe next time before taking to the podium he should at least know the nationality of the proprietors of the concentration camps where millions of Jewish souls lost their lives.

After boasting that some of his best friends are in fact Jewish, Obama implied that he knows more about the religion than any other president because he gained his knowledge from reading.  What the President failed to mention was whether his favorite Jewish author was Elie Wiesel, the author of Night, or his half-brother Mark Okoth Obama Ndesandjo,whose mother Ruth was Jewish and whose father was a notorious Kenyan atheist with the Muslim name of Barack Obama Sr..

If the President is serious about how he acquired his Jewish expertise, then attending kosher chicken and rendered-poultry-fat barbeques in Chicago and reading The Big Jewish Book for Jews may be all he felt he needed to make him an authority on the subject, which makes one wonder how a man so entrenched in all things Jewish could place “Polish” instead of “Nazi” in front of the words “death camp?”

Nonetheless, at least for the next 158 days, President “Choomwagon” remains front and center on the national stage.  In the meantime, if Barack Obama can’t navigate his way around the “57 states” — give or take — of the nation he leads, how can anyone expect him to keep straight whether Auschwitz was run by Germans or Poles?

So, before getting all apoplectic over the President’s misrepresentation of what was going on in Poland, in the name of fairness let’s show some compassion for a man whose unreleased college transcripts might reveal failing grades in geography.

In addition, while the President may feel comfortable counseling Angela Merkel and the EU on how to boost economic growth by “easing up on fiscal austerity,” it appears that besides being shaky on Poland’s history, global citizen Barack Obama is not all that well-versed on things pertaining to Deutschland, either.

In 2009, one of Obama’s many embarrassing gaffes took place in Strasbourg, France. When referring to the political interaction in Europe being similar to the United States Senate, Obama suggested that Austrians speak “Austrian” when he said that “There’s a lot of — I don’t know what the term in Austrian, [is for] wheeling and dealing.”

Note to Obama: there is no term in Austrian for “Machenschaften” because the language of Austria is German, which proves that unless Barack Obama consumed a lot of pierogies in the past and was trained in the fine art of German Slap Dancing, he can’t possibly be as knowledgeable about Poland and Germany as he is about Judaism, thanks all his Jewish buddies in Chicago.

So with very few friends in Poland and given his European geographical and language deficiencies, it should be no shock that as Obama lauded Jan Karski with heartfelt affection he included a jaw-dropping reference that Poles found extremely offensive when he said:

Jan served as a courier for the Polish resistance during the darkest days of World War II. Before one trip across enemy lines, resistance fighters told him that Jews were being murdered on a massive scale, and smuggled him into the Warsaw Ghetto and a Polish death camp to see for himself.

In response to Obama’s “death camp” faux pas, Polish Foreign Minister Radek Sikorski quickly responded by declaring that the White House “will apologize” for Obama’s “outrageous” statement (which thus far they have failed to do). Sikorski also lamented the fact that the “Hope and Change” President’s Medal of Freedom ceremony was eclipsed by “ignorance and incompetence,” which was probably not the 2012 campaign slogan Barack Obama had hoped would catch on.