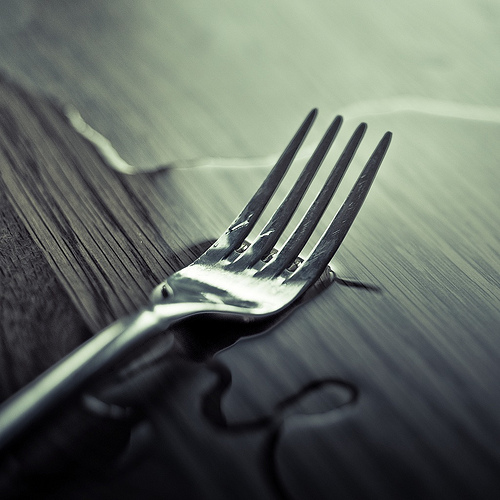 In order to make sure the guest speaker was safe from harm, just prior to President Barack Obama arriving in Orlando, Florida for a stump speech, a National Association of Latino Elected and Appointed Officials board member commandeered forks from delegates attending the event.

Allegedly, the request came as a result of the Secret Service specifying that there be no eating utensils present in the room where the President was speaking. To ensure the conference hall was sufficiently swept clean of prohibited paraphernalia guests were asked to finish eating and ‘fork over’ the potentially hazardous forks after knives were already missing from the venue “for a reason.”

Although the Secret Service maintained that banning silverware at large events is common, let’s face it, Barack Obama has dined with individuals that are a lot more menacing than a bunch of Latino supporters eating salad and pre-cut chicken.

When Obama and former Russian president Dmitry Medvedev sat in the middle of Ray’s Hell Burgers surrounded by a roomful of people stabbing French fries with forks, it didn’t look as if the Secret Service doubled as busboys and collected the utensils.

Quite frankly, for the individuals attending the event, the Secret Service confiscating sharp objects at a Latino-sponsored function could have been interpreted as an ethnic slur.

Was the President’s security team suggesting that, based on the adept cutlery skills being showcased by individuals south of the border lately, all Latinos have the potential to be dangerous with knives?  Or was it the famous stabbing scene in West Side Story what caused those responsible for the President’s safety to be wary of Latinos armed with an implement barely sharp enough to slice through a lump of mashed potatoes?

Whatever the reason or excuse, the diners were asked to speed it up and finish their meal ‘chop-chop’ before the President arrived.  Without suspecting that an attendee would attempt to slide a fork up a shirtsleeve, board member Raquel Regalado, having full confidence that the attendees would comply, announced to the 1,000 delegates gathered in a ballroom at Disney’s Contemporary Resort at Walt Disney World, that “It’s very important that you use your utensils as soon as possible.”

Regalado reminded the people stuffing food into their mouths at warp speed “As you know, we’re having another speaker and there is some Secret Service involved. So there’s a reason why there’s no knives at your table and the forks will be collected… And I’m not joking.”

So, like the good Hispanic mother, I’m here to tell you to please” make like Speedy Gonzales, and before Barack Obama shows up “eat your [pre-cut] lunch” and then fork over the forks.

In response to the strange no knife and fork at a luncheon decree, special Agent Max Milien explained, “The Secret Service coordinates this process with staff and host committees to ensure tables are cleared of material that may be deemed hazardous prior to the arrival of the president.” However, Milien defended the action saying, “Any implication that this was unique for this event is completely inaccurate.”

According to Max the Secret Service “adjusts security depending on the size of the crowd and how much officials know about who’s in attendance.”

For instance, there’d be no need for a magnetometer if the President should decide to march a second time at a New Black Panther Party rally because with that group he’s among friends. However, if Obama throws out the first ball at another wholesome Red Sox game or if he’s in the company of Boy Scouts, it’s likely security measures go into overdrive.

Milien declined to comment on the inconsistency of the President being in such close proximity to ‘Dinner with Obama’ contest winners who eat with a full complement of utensils on one day and the request to have dull knives and bent forks removed from the Latino event on another. Not to mention that, as of Father’s Day, the President had ventured out on the golf course 98 times and spent the day in the midst of individuals brandishing golf clubs made of titanium steel, which could certainly double as a lethal weapon if in the possession of a political adversary.

Moreover, with the caution frequency turned up so high at luncheons and campaign speeches, why hasn’t the Obama 2012 Grill Spatula been taken off the store.barackobama.com website. Not to mention the Obama 2012 pin collection, both of which, as far as weapons go, are likely to be a more treacherous threat to the President than a fork with a bent tine.

Nevertheless, Barack Obama went to the National Association of Latino Elected and Appointed Officials in Disney World and came away the function unscathed. Until, of course, without the threat of a knife or fork being anywhere around, the President all on his own nearly broke his skull at the next stop, exuberantly scurrying up the stairs to the stage to address the next crowd gathered in Tampa.