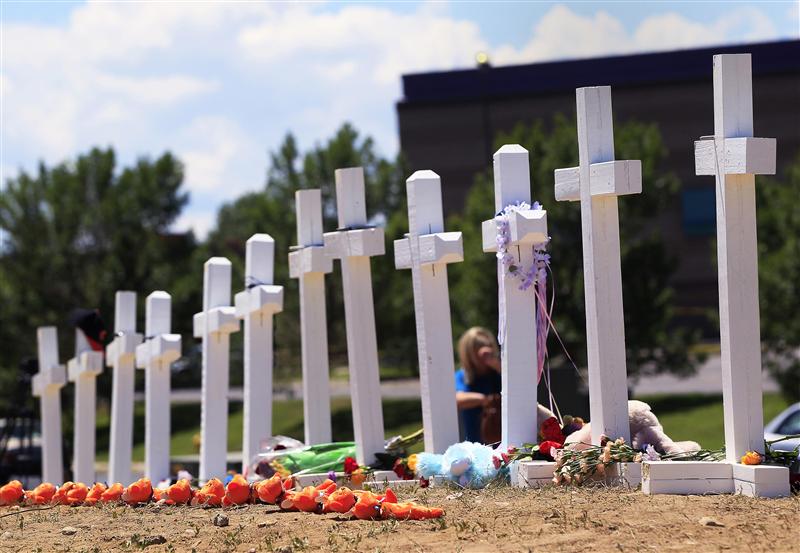 Another day, another mass murder. This one took place in Aurora, Colorado and was carried out by a lunatic doctoral candidate outfitted in full tactical gear. Twenty-four-year-old aspiring neuroscientist James Holmes, toting a number of semi-automatic weapons, crashed a midnight screening of ‘The Dark Knight Rises.” And oh what a ‘dark night’ it was, especially because the shooter murdered 12 people and wounded 58 more, some small children.

As a rule, it’s never a good time to politicize a national tragedy. Yet, in response to the largest mass shooting in US history, Barack Obama responded to the crisis by extolling the value of life.

The President was so shaken by the event that he actually skipped campaigning for the day. Instead, at a prescheduled stop in Florida, he took the time to advance his image as a protective father, a compassionate American, a prayerful/reflective Christian, and a somber individual who values life.

Based on Obama’s reaction it’s apparent that for pro-choice liberals the loss of innocent lives is deplorable — but only some lives, and only if the ones doing the dying are wanted, breathing outside the womb, and the carnage is covered on cable news.

And while the President’s remarks were admirable, it’s hard to ignore the hypocrisy of those who support the choice to exterminate unwanted human beings in a morally dark abortion clinic publicly lamenting the loss of life in a darkened movie theatre. Therefore, as the coroner is assigned the grim task of dealing with the dead, what better time to discuss why it is that America is afflicted with the disease of murder and mayhem?

At present, there are few who would argue that there is a generation among us well aware that prior to birth their lives were subject to the whims of women supported by political enablers who made abortion on demand accessible for reasons as trivial as convenience. Now, after 40+ years of sowing a lie that insists privacy includes the right to slaughter the unborn, society finds itself “reaping a whirlwind” administered by a lunatic whose vicious act proved that James Holmes was successfully persuaded that sanctity does not apply to life.

If pro-abortion advocates refuse to acknowledge that an ideology which undervalues life within the womb also has the power to impact life outside the womb, then maybe it’s time someone pointed out the hard truth that America’s pro-death culture could be partially responsible for the loss of life in Colorado.

A good place to start is with the disconnect of radically pro-choice President Barack Obama responding to the tragedy by stressing the preciousness of life while speaking to an audience of “Women for Obama,” some of whom were sporting pro-Planned Parenthood buttons.

In the aftermath of the “Dark Knight” massacre, instead of “having a fun conversation…about some really important matters we face as a country,” Obama appropriately chose to cite the slaughter in Aurora. Stressing the tragic nature of the incident, Obama mentioned that “Some of the victims were being treated at a children’s hospital” where those who were “born alive” are saved, not left to die.

Exhibiting generosity of spirit, Obama even broke with “Fast and Furious” stonewalling protocol and offered the city of Aurora the federal government’s assistance in bringing “whoever is responsible for the heinous crime to justice.”

Then the President said, “Now, even as we learn how this happened and who’s responsible, we may never understand what leads anybody to terrorize their fellow human beings like this. Such violence, such evil is senseless. It’s beyond reason… we will never know fully what causes somebody to take the life of another.”

It’s stunning that those poignant words came from the mouth of a man who condones crimes against his fellow human beings, albeit human beings yet unborn. And while the sentiment that we may “never know fully what causes somebody to take the life of another” is sincere, given the fact that 60 million Americans have been aborted since 1973, maybe Barack Obama should pose that question to himself.

The truth is, if Mr. Obama spent less time reassuring Planned Parenthood that the work they do is commendable and more time convincing the country that all life is precious, his words could potentially have the power to heal the nihilism that has taken up residence in the hearts and minds of twisted individuals like James Holmes.

In his brief statement, Barack Obama reminded America that those who were killed in Aurora were “mothers and fathers; they were husbands and wives; sisters and brothers; sons and daughters, friends and neighbors. They had hopes for the future and they had dreams that were not yet fulfilled.”

One can only pray the President felt the sting of conviction from his own words and comprehended the vast resource of human potential that is squandered daily in abortion clinics he supplies with federal funds.

Furthermore, hearing a man who approves of the slaughter of 3,700 unborn children a day say that “It’s what we do on a daily basis to give our lives meaning and give our lives purpose,” is another vivid example of this President’s gross hypocrisy.

Hopefully, Barack Obama followed his own advice and spent the rest of the day in “prayer and reflection.” If he did, maybe he came to realize that devaluing human life at any stage devalues all our lives at every stage.

Whether he did or he didn’t doesn’t change the fact that adhering to the belief that the senseless murder of 60 million viable human beings — or 20% of the US population — has had no effect on the psyche of a nation is, at best, just another form of psychosis.

Either way, as politicians and pundits continue to contemplate the motivations behind public massacres, the truth is that the blame for the cheapening of human life and the random bloodshed we’ve been enduring is at least partially attributable to those who have systematically convinced a generation of Americans that some lives have worth and others do not.