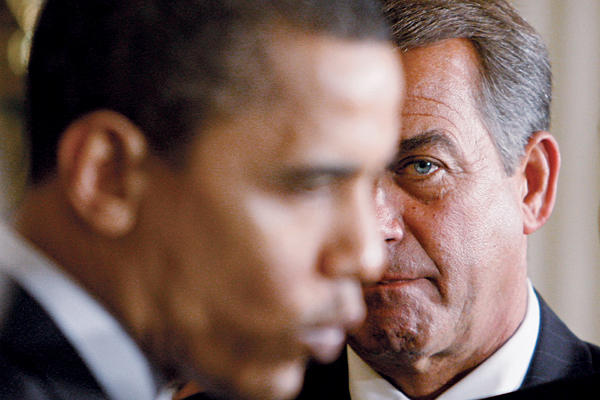 Based on the dismal state of the union and after four years of doing exactly what Rush Limbaugh said he hoped that he would do, by any thinking person’s standards President Barack Obama has indeed “failed.” Yet, despite the catastrophe, on Election Day the American people inexplicably invited the President to spend the next four years beating the dead horse that he killed during his first term.

The next day, after being MIA for months, Speaker of the House John Boehner crawled out of the tanning bed long enough to publicly assure the President that House Republicans plan to work with him on his sole first-term accomplishment – the looming “fiscal cliff.”

Wait a minute, wasn’t it way back in 2008 that Barack Obama told America that “this is the moment” when good jobs would be provided for the jobless, the rise of the oceans would slow, and the planet would begin to heal? Why then, as America drowns in an ocean of debt and sinks in a sea of unemployment, would the Speaker of the House tell Obama “This is your moment…we want you to succeed?”

Reminiscent of candidate Obama exalting himself while on the campaign trail in 2008, Boehner said:

Mr. President, this is your moment. We’re ready to be led not as Democrats or Republicans, but as Americans. We want you to lead not as a liberal or a conservative, but as the president of the United States of America. We want you to succeed. Let’s challenge ourselves to find the common ground that has eluded us.

In addition to those comments, did the Speaker of the House really say that “If there’s a mandate in … [the election] results it’s a mandate for us to find a way to work together on the solutions to the challenges that we all face as a nation?”

Well, what Boehner may not have anticipated is that come January working together on solutions will likely include figuring out how to prevent the President’s ardent supporters from melting down when they realize that voting for him did not exempt them from the middle class tax increase that’s due to hit hard when the Bush-era tax cuts expire.

Nonetheless, one way Republicans can still embrace our intrepid leader is by supporting automatic cuts in defense spending.  After all, as a Russian nuclear submarine trawls the waters off the east coast of the US, cutting defense spending will help Barack Obama deliver the flexibility he promised comrade Vladimir Putin.

Moreover, if “reaching across the aisle” is the Speaker’s genuine objective, maybe as an inaugural gift congressional Republicans can hand the Biggest Big Spender in American history a no-limit charge card by agreeing to increase the debt ceiling.

John Boehner did claim that the post-election plan is to help Barack Obama move the country FORWARD. But, by the Speaker continuing to insist that raising the top tax rate in a bad economy would hurt small businesses he threatens the elusive “common ground” that he seeks.

However, if Boehner believes that this is truly Barack Obama’s “moment,” why not just let the President do whatever he wants? Republicans in Congress should politely step aside and allow Obama to finish what he started. In so doing, they will inoculate themselves against any ensuing liability as well as avoid becoming the object of Obama’s notorious blame game.

And so, as conciliatory bipartisanship is cultivated and John Boehner encourages Barack Obama to forge ahead, one can only hope that the newfound collegiality in Washington DC includes Republicans helping our determined liberal leader to aim that big ole’ policy gun he has pointed at America’s head downward toward his own foot.