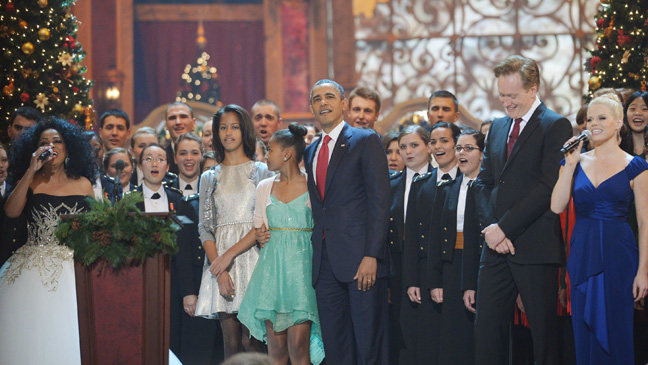 Besides turning the White House into a tabernacle to a Portuguese Water Dog, this year, for the holidays, the president and his family attended the annual “Christmas in Washington” TNT special taped at the National Building Museum.  The Obamas graced the stage with host funnyman Conan O’Brien and Motown diva Diana Ross, who had a broken ankle and was dressed like a black-and-white Christmas tree-topper.

To add to the holiday spirit, a herd of elves, pop star Demi Lovato, The Voice‘s Chris Mann, American Idol‘s very own country crooner Scotty McCreery, Smash‘s Megan Hilty, and PSY, the South Korean “Gangnam Style” psycho with a history of protesting America by smashing replicas of U.S. military tanks, were all there.

The president reminded the audience that the charitable event was “[a] chance to make a real difference in the lives of some very brave former patients from Washington DC’s pediatric Children’s National Medical Center” and that “[m]any of these kids and their parents are going through tough times right now, and your support helps give them a reason to hope – not just during the holidays, but all year round.”

Despite the government’s splendid plans to oversee national health care, Barack “Big Government” Obama seemed to suggest that private charitable donations are still needed to lift the financial burden from sick children and their families.  After all, not every illegal alien has access to a free kidney.

Forgetting about his impending $4-million Christmas vacation, Obama heaped upon the audience guilt weightier than a satchel full of wet puppies.  Always careful to inject his usual Marxist message into everything he says, the president shared from the heart that he believes that Christmas “[b]lessings aren’t just meant to be enjoyed — they’re meant to be used and shared with those who have less.”

Translation: Americans have too much, and what we do have should be redistributed amongst those who have less.  Except if you’re Obama.  Then you’re allowed to delight yourself yearly with $1.4 billion‘s worth of exclusive presidential perks.

Cautious not to offend non-Christians on a Christian holiday, Obama shared that “[a]t the heart of many of the world’s great religions is the idea that we’re all better off when we treat our brothers and sisters with the same love and compassion that we want for ourselves.”

That belief is for only those who don’t have an impoverished half-brother named George who lives in Kenya, in which case “do unto others” doesn’t apply.

Barack Obama suggested we follow “Christ’s calling to love one another as He has loved all of us,” by praying for “Americans … spending this holiday in a hospital bed.”  What he forgot to mention was the dismal future awaiting a nation he shackled to a socialist-style health care system.

Then, when speaking about the down-and-out, Obama again failed to acknowledge his brother George.  He also chose to forego offering to house some of America’s homeless in that vacant $40-million mansion he allegedly purchased in Hawaii.

In closing, without mentioning proposed cuts in military funding that will impact everything from troop readiness to TRICARE and military retirement benefits, the president called to mind those men and women “protecting our freedom on a battlefield far from home.”

And so, the person who is currently decimating health care, the military, and the economy is obviously also blind to the fact that he is the reason the nation is in such urgent need of prayer.  Without even realizing it, at this year’s Christmas in Washington special, Barack Obama exhorted Americans to pray for the victims of a dire situation he created.