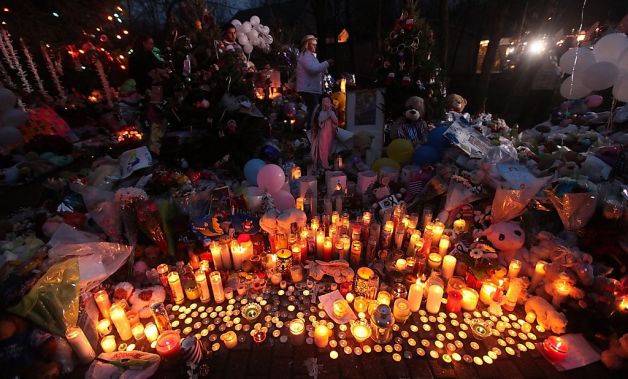 The other night Barack Obama came to Newtown, Connecticut to attend the Sandy Hook Prayer Vigil.  He was there to offer condolences to the grieving and to honor the memory to the individuals killed in the massacre, whom he described as “twenty beautiful children and six remarkable adults.”

Of the six women who died, Obama conceded that “[t]hey responded as we all hope we might respond in such terrifying circumstances — with courage and with love, giving their lives to protect the children in their care.” Right from the start, women being praised for laying down their lives for a child provided a stark contrast to the Sandra Fluke culture Obama usually promotes, where selfishness trumps the sanctity of life.

Nonetheless, the man who warned against tying politics to tragedy segued smoothly from grief and prayerfulness into using a catastrophe for his own political purposes.

Oblivious to the contradiction posed when a person who believes that a fetus is not a human and that medical care should not be given to infants born alive in botched abortions speaks touchingly of newborn babes, Obama said “With their very first cry, this most precious, vital part of ourselves — our child — is suddenly exposed to the world, to possible mishap or malice.”

The President, who in the past has likened unwanted pregnancy to punishment, then shared that “[e]very parent knows there is nothing we will not do to shield our children from harm.”

After discussing parents protecting their children, Obama entered African proverb “it takes a village to raise a child” territory. The President suggested that parents are shocked when they realize that “loving your children isn’t enough to keep them safe.” According to Obama, “teaching them well, is something we can only do together, with the help of friends and neighbors, the help of a community” – and most importantly, “with the help of a nation,” otherwise known as a liberal-ideology-pushing entity called the U.S. government.

The Collectivist-in-Chief then proceeded to shepherd America’s children into the village with the following pronouncement: “And in that way, we come to realize that we bear a responsibility for every child because we’re counting on everybody else to help look after ours; that we’re all parents; that they’re all our children.”

Then, he said “This is our first task — caring for our children. It’s our first job. If we don’t get that right, we don’t get anything right. That’s how, as a society, we will be judged.” Amen to that one Mr. President, because right about now it’s good to know that caring for all our children is what could stem the tide of judgment.

From there, the Planned Parenthood cheerleader with the 100% NARAL voting record asked a question that he should pose to himself:

And by that measure, can we truly say, as a nation, that we are meeting our obligations? Can we honestly say that we’re doing enough to keep our children — all of them — safe from harm? Can we say that we’re truly doing enough to give all the children of this country the chance they deserve to live out their lives in happiness and with purpose?

America’s most famous feticide and infanticide crusader, answered himself correctly when he then stated, “[i]f we’re honest with ourselves, the answer is no… And we will have to change.”

He then recounted the grim fact that “Since [he’s] been President, this is the fourth time [America] came together to comfort a grieving community torn apart by a mass shooting.” What Obama failed, or chose not to point out, was that since 1966 there have been 16 mass shootings in America, eight of which – 50 percent – took place on his watch.

In response to a 953% increase in the annual mass-shooting rate in the last four years as compared to the previous 42 years, what did the President propose?  More change, of course!

Therefore, in anticipation of the forthcoming arguments that are bound to arise in response to the sort of ‘change’ he plans to implement, the President took preliminary steps to defuse predictable resistance. Obama’s vigil visit lay the groundwork for the “meaningful action” he promised on the night of the shootings, by jumping in front of the debate.

The President argued that “We will be told that the causes of such violence are complex, and that is true.”  However, in anticipation of enacting new laws, he then said “No single law — no set of laws can eliminate evil from the world, or prevent every senseless act of violence in our society.” Using that kind reasoning, the truth should not be an “excuse for inaction.”

From the sound of things, it seems America’s most ardent advocate for choice is about to circumvent the opposition to address gun laws, because “what other choice do we have” besides his choice?  During a prayer service, America’s Executive Power addict inappropriately flexed his sovereign muscle when he said that “in an effort aimed at preventing more tragedies like this” he would, once again, use “whatever power this office holds.”

Liberals believe 60 million dead babies and counting is a price worth paying for the right to choose. Now it sounds like the Second Amendment might be the price America is about to pay to ensure the safety of the same children who, were they inside a womb instead of a classroom, Obama would have zero problem aborting.

Signaling that freedom is about to be targeted and after expressing unwillingness to “accept events like this as routine,” Obama then posed an unsettling question: “Are we really prepared to say that we’re powerless in the face of such carnage, that the politics are too hard?”

Let’s remember – for community organizer types, random carnage is not only a crisis, it’s an opportunity that cries out for a remedy, especially when the death of innocent children provide the motivation to guilt the resistant into submission.  Therefore, the tone and direction of the President’s remarks seemed to suggest that disagreeable Constitutionalists had better get out of the way.

Then, exploiting a grieving community, the President probed further, “Are we prepared to say that such violence visited on our children year after year after year is somehow the price of our freedom?” That statement should incite terror in every American who cherishes liberty.

And so Barack Obama offered Sandy Hook his presidential condolences, tearless weeping, and poignant personal anecdotes on parenting. However, after the statement that indicated he plans to place the unpredictable security of a few above the established freedom of many, “the price of our freedom” was truly a chilling choice of words.