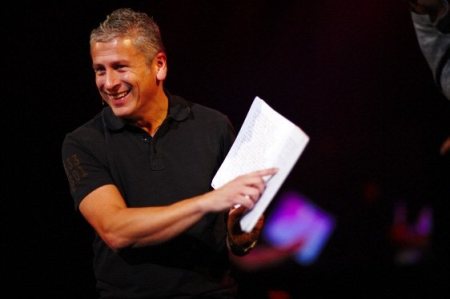 Christians from all across America are outraged that popular evangelical pastor Louie Giglio of laminin fame has been banished and will no longer be delivering the benediction at President Obama’s second and possibly even more historic inauguration, due to take place on Martin Luther King Day.  For daring to speak truth, Pastor Giglio, after being marked with an anti-gay branding iron and summarily booted from the dais, is now pretending to have willingly backed out of the function.

The controversy concerns a sermon Giglio delivered in the 1990s that endorsed the 5,000-year-old biblical teaching that homosexuality is a lifestyle choice displeasing to God, ergo a sin.  After learning about the inflammatory dissertation, the White House, whose stated desire is to have an inaugural that reflects diversity, immediately distanced itself from Mr. Giglio.

Supposedly, Louie was chosen initially because of his work combating human trafficking.  If the ousted minister had prevailed, Mr. Obama would have surely found a way to exploit the pastor’s involvement in the global mission by tying human slavery to the plight of those Obama believes are enslaved by a system that denies social justice to poor minorities.

Nonetheless, on behalf of the president with the mysterious past, Presidential Inaugural Committee spokesperson Addie Whisenant said that “at the time of his selection.” the committee was unaware of Giglio’s 20-year-old comments.  Ms. Whisenant went on to remind affronted gay activists that Giglio’s sentiments do not “reflect [Obama’s] desire to celebrate the strength and diversity of our country at this Inaugural.”

Therefore, it appears that if a Christian dares oppose secular society’s effort to accommodate a radical homosexual agenda, after a public excoriation, he can expect to be exiled to life beyond the city gates.  Tolerance and inclusion can now be officially defined as the rejection of traditional values and the forced acceptance of aberrant sexual behavior.

In her prompt response, Ms. Whisenant reassured Mr. Obama’s gay supporters that the committee is working to “select someone to deliver the benediction” whose “beliefs reflect this administration’s vision of inclusion and acceptance for all Americans.”  The term “all Americans” apparently excludes Christian-Americans, who, with the exception of saccharine pastor Joel Osteen, are neither included nor accepted.  For that reason, anti-bullying bully Dan Savage would be a more suitable candidate to consecrate the gaieties.

Either way, in the wake of what Albert Mohler, president of the Southern Baptist Theological Seminary, called “the new moral McCarthyism,” Christian leaders are pointing out that in order to be a true reflection of diversity, the inauguration should include the full spectrum of opinion, including viewpoints that may be disagreeable to homosexuals.

Furthermore, as if time gone by could somehow change God’s established truth, other Christian leaders are suggesting that Reverend Giglio’s “homosexuality is bad” comments lack relevancy because they were expressed way back in the Clinton era, when Barack Obama was tithing to Jeremiah Wright’s anti-Semitic, black separatist Trinity United Church of Christ.

What’s most disturbing about the Giglio affair isn’t so much that he’s being scorned for what he said twenty years ago, but rather that for two decades, liberals had no problem with the content of his sermons.  Frankly, unless the reverend was planning to rebuke the masses gathered round the Capitol steps, it’s just as well that he remains hunkered down with his colossal “indifference is not an option” skyward reaching hand back in Atlanta, Georgia.

Not only that, but Louie Giglio should also be grateful that his anti-gay comments were exposed prior to the event.  If, God forbid, the Presidential Inaugural Committee had caught wind of his opinion midway through the invocation, Louie might have instantaneously disappeared through a trapdoor built into the floor of the inaugural platform.

In a way, Louie Giglio being “honored” to accept the president’s invitation to pray over his swearing-in is worse than the Atlanta minister getting the bum’s rush by the predictable left.  What, pray tell, was Giglio thinking?  What was he going to ask God to do on Obama’s behalf?  Which politically correct Bible was Louie going to be allowed to use while praying — the Sodom and Gomorrah edition, or the Queen James version?

Was the Passion Ministries pastor whose words influence many of America’s Christian youth also willing to accept the responsibility for putting verbal and visual approbation on the second term of a Scripture-quoting president whose first term stopped just short of mocking everything “pure, lovely and of good repute?”

Historically, rejection from the world proves that a disciple of Christ is on a path to righteousness.  Thus, it should be the goal of every Christian to be “despised and rejected” by the likes of men like Barack Obama.  After all, offending heathens was Jesus’s forte — so much so that the leaders of His day nailed Him to a tree for speaking truths they didn’t want to hear.

After “respectfully [ahem] withdraw[ing his] acceptance of the President’s invitation,” Louie Giglio promptly changed his focus to preserving “the collective right to hold differing views.”  It would have been much more impressive if, rather than “withdraw” after the fact, Louie Giglio had chosen to “decline” in the first place.

Either way, if future opportunities arise, Pastor Louie Giglio’s Christian witness will have a far greater impact if he outright refuses to sanction any secular leader whose personal and political choices flout the Word of God.

Please read and support American Thinker. a website dedicated to exposing the truth.