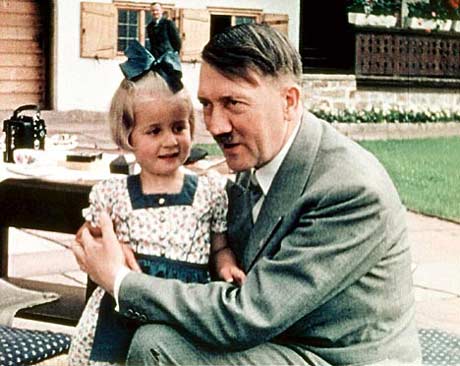 Daring to suggest that there may be even a remote similarity between Barack Obama and Adolf Hitler is considered by many to be a comparison that is extreme.  But ever since the president acted unilaterally and chose to push through his $500 million anti-gun package with its 23 executive orders while surrounded on all sides by young children, there is one parallel that makes Barack Obama’s interaction with youngsters similar to that of Germany’s Führer, Adolf Hitler.

In their nearly identical fondness for staged expressions of compassion about issues affecting their citizens, both men posed with children in one location while sanctioning their murder in another.  Therefore, when it comes to the exploitation of little ones, it should not be considered irreverent to weigh the president’s calculating tendencies against those of Der Führer

In fairness, it must be said that it is common for most politicians to use children as accoutrements to advance a given agenda. Notorious totalitarian dictators like Mao and Stalin did it, and Hugo Chavez and Fidel Castro still do it too.

On occasion, former president G.W. Bush was known to include children in policy-based photo ops – but he did it to advance pro-life policies that supported the dignity and sanctity of life. Adolf Hitler’s intent was quite the opposite. Germany’s leader exploited certain children for propaganda purposes, and did so while other children he believed were subhuman were being executed.

Therefore, during the first phase of the dismantling of the Second Amendment, when Barack Obama pretended to take counsel from four schoolchildren, in essence what he was doing was chillingly similar to what Hitler did.  Why?  Because at the White House while the President was advocating for child safety, in abortion mills across the nation clinicians were carrying out the grisly work he supports.

After the Sandy Hook shootings, as well as at the White House signing of his two dozen Executive Actions, NARAL 100-percenter Barack Obama shared with Americans the following words: “This is our first task as a society, keeping our children safe. This is how we will be judged.” Adolf Hitler said similar things; in Mein Kampf, Der Führer declared that the “folkish state…must declare the child to be the most precious treasure of the people.”

The problem with both those statements is that during the height of World War II, while Hitler posed for photographs with tow-headed liebchens, his minions were busy “grabbing the legs and smashing the skulls of living babies” against the sides of cattle cars.  For Adolf Hitler, his young targets were Jewish children below the age of 12. For “Above My Pay grade” Barack Obama, it’s pre-born, partially born, and born-alive babies of any race, creed, or color.

At the White House signing of his anti-gun executive orders, while Obama passed out awkward hugs to children who, no thanks to him, somehow managed to get out of the womb alive, abortion providers across the country were sucking the brains out of living, partially-born infants.

According to Ian Kershaw, professor of modern history at the University of Sheffield, Adolf Hitler initiated and demanded the killing by gassings, shootings, and beatings. Yet much like Barack Obama, Der Führer managed to keep his hands clean by remaining “aloof from the dirtiest work of his regime.”

In America, eighty years after Germany was defeated, national teams of well-funded Planned Parenthood SS squads scald, dismember, and suction pre-born infants to death. As with Hitler’s “Final Solution,” the ongoing American Holocaust has Barack Obama’s political and financial support. That is why, although the hand that recently high-fived an 8-year-old girl in public is a hand drenched in innocent blood.

In pursuit of an Aryan race, it took Adolf Hitler six years to exterminate six million Jews, millions of whom were babies and young children. Barack Obama, on behalf of freedom of choice, endorses and funds the mass destruction of 1.2 million pre-born infants per year.

In the end, despite the harsh nature of the Hitler/Obama comparison, when it comes to the simultaneous exploitation and extermination of tiny children there is not much difference between history’s most famous master race-maker and America’s master guardian of state-sanctioned genocide.