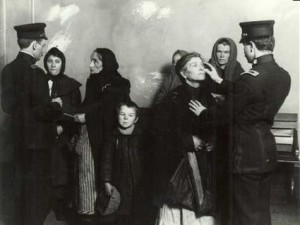 Liberals apparently no longer have a problem with the evil European white man invading the pristine Americas and killing the red man with infectious diseases. Either that or they’ve appointed themselves arbiters of a communicable-disease version of “What goes around comes around.” Of late, it seems the left’s goal is to have third-world types infect Americans with maladies long eradicated from within our borders.

Beginning in the late 1890s when the largest wave of immigration began, the United States took controlling disease at the nation’s borders very seriously. Although at the time bio-terrorism was unheard of, the realization of the detrimental impact infectious illness could have on America was a consideration not taken lightly.  Unfortunately this is no longer the case.

During the height of 19th century immigration, all émigrés were suspect of being disease carriers and were treated as such. Instead of burdening the system, endangering American citizens, and allowing people to enter the country who were of no benefit to our nation medically, economically, or socially, families were split up and potential earners sent home.