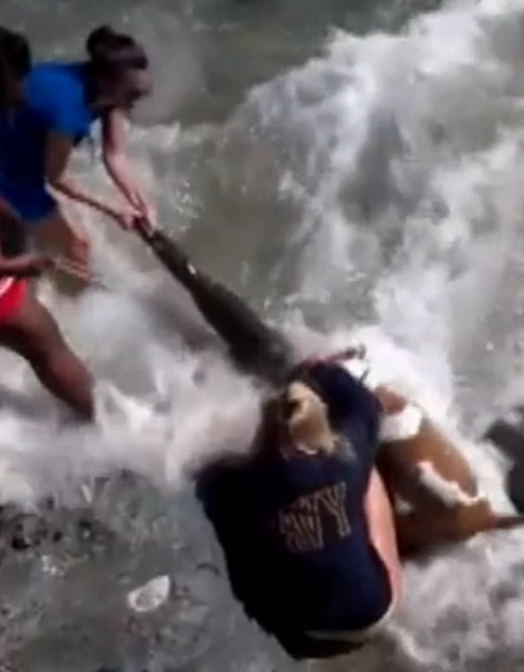 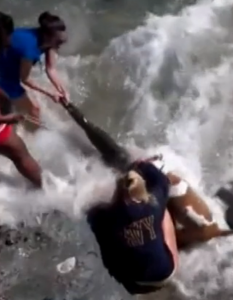 In the same way that Mark Kelly’s life was forever changed when his wife Gabby was shot in a Safeway parking lot by a madman with a Glock 19, so too has his life been touched by witnessing his 18-year-old daughter Claudia’s dog attack a helpless baby sea lion in Laguna Beach, California. The last time it was at a congressional outreach meeting; this time it was while on a family vacation at Goff Cove Beach, where the message is: “If you do visit this area please do not take, collect or disturb any of the marine life.”

Leisurely walking the beach near the Montage Laguna Beach resort with his daughter and her 65-pound American bulldog, the dog suddenly exhibited instinctual behavior when it noticed a sea lion pup, broke free from the leash, and charged the helpless pinniped. Sea lions detect prey by sensing victim vibrations with their whiskers; suffice it to say that the Kelly dog seriously messed up this particular sea lion’s vibrissae. After locking down on its face with a mandible that exerts 235 pounds of force, assault bull dogs can now be added to the list of the sea lions’ natural predators that includes sharks, whales, and polar bears.

Ruining the mood in an otherwise affluent seaside artists’ community, the Kelly dog, after hunting and capturing prey that typically only includes bear, wild boar, raccoon, and squirrel, could not be coaxed to discharge the hemorrhaging seal from its 42 large teeth. A commotion ensued as passersby rushed to the seafaring mammal’s defense, because the stubbornly uncooperative dog simply refused to release his catch from his grip.

The question arises, especially for a family dedicated to nonviolence: Wasn’t the Kelly dog taught to control its natural aggression, or exposed to the ‘PETA principle’ that states “animals are not ours to eat, wear, experiment on, use for entertainment or abuse in any way?”

Guess not, because the Laguna Beach incident quickly spiraled out of control. Not only did the Kelly dog exhibit ferocious conduct, but stimulated a similar response in a passerby who, in an attempt to convince him to release the sea lion, and in lieu of a club, beat the hound with an environmentally-friendly piece of sea weed. As screaming and crying filled the air, Kelly’s daughter, who should have taken the powerful dog to obedience class as a puppy, was yanking him from behind screaming, “Let go… let go,” while another woman played tug-of-war with the dog using her full weight to pull on the dying sea lion’s tail.

From the rocks above, some man screamed, “”Drown the dog. He will let go and swim. Trust me,” to which Ms. Kelly responded with an unladylike expletive.

ventually, Astronaut Kelly appeared and saved the day. For lack of an assault weapon to shoot the dog, Mark was forced to shake the family pet loose, after which, visibly annoyed, he yanked the pooch with the blood-stained maw and led a weeping daughter, in need of consolation, away from the dead seal.

Kelly later met with police, who did not issue his daughter a citation because at this time of year it’s legal to walk leashed dogs on the beach. Therefore, Mark Kelly’s daughter’s dog got away with murder, because after dying from his wounds and receiving an impromptu burial at sea, the sea lion was in no condition to press charges.

Thankfully, Gabby “Be Bold… Be Courageous… Support Background Checks” Giffords was not involved in the incident, either as an eyewitness to the crime or as a participant in coaxing the doggy to give up his ill-gotten grub. A spokesman for Kelly and his wife issued a statement calling the bulldog slaughter of the sea lion “a sad accident.”

According to the Pacific Marine Mammal Center in Laguna Beach, there are a large number of ailing sea lions washing up on shore. So the unfortunate event likely took place because a sickly pup made its way to the coastline in search of comfort and was met by Mark Kelly’s assault dog that saw fit to put a “beached animal in distress” out of its misery by crushing its precious little face in a jaw lock.

Therefore, if Mark Kelly is true to form, any day now you should see him in a pet store purchasing another American bull dog. After the disturbing incident on Laguna Beach, in an effort to demonstrate the ease of acquiring assault dogs, watch for Mark Kelly to make the rounds at dog shows and bulldog breeders too. And it won’t be because he’s shopping for another cuddly pet; it will only be to prove a point.