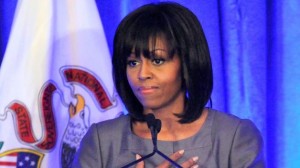 First Lady Michelle Obama recently headed home to the Southside of Chicago where she dipped her perfectly exercised toe into the gun violence debate.

Mrs. O arrived in the city that has enacted the most stringent gun-control laws in America to address local business leaders on the problem of gun violence.  Oddly, Michelle forgot to consider the possibility that  gun legislation is the reason for the high percentage of gun-related deaths in Chicago.

Richard A. Pearson, executive director of the Illinois State Rifle Association, believes that “The gun laws in Chicago only restrict the law-abiding citizens and they’ve essentially made the citizens prey.”

Yet the anti-gun Left keeps on keeping on in the push to make it even more dangerous for law-abiding citizens to defend themselves.  The Left’s argument is that stricter gun laws outside of Chicago would ensure that fewer illegal guns make it into Chicago.  It’s sort of like the liberal argument that freezing weather is proof of global warming.

David Spielfogel, senior adviser to Hizzoner Rahm Emanuel, agrees and argues that “Chicago is not an island.  We’re only as strong as the weakest gun law in surrounding states.”  So in other words, if nothing else works to convince Americans to willingly relinquish their Second Amendment rights, what might do the trick is having Michelle Obama stress that dead children in Chicago are only dead because of relaxed gun laws in other states.

That sort of rationale coincides with the bizarre legalistic belief that if you remove junk food from school cafeterias and vending machines, when the chubby kids leave school grounds, rather than mainlining Fluffernutter, raw string beans will become their after-school snack of choice.

And so it seems that the anti-gun lobby is firmly convinced that the cure for gun violence is to nationalize what has failed so miserably in Chicago. Which raises the question: What is it about the Obamas that if something isn’t working, they work on it even harder?

Even more stunning is that supporters of an administration that purposely funneled guns into Mexico are now blaming Chicago’s crime rate on guns making their way into the Windy City from outside the city limits.

That must be why Michelle gave up her fantasy of being Beyoncé for the day, and rather than equate herself with Brian Terry and Jamie Zapata and hundreds of dead Mexicans shot with Eric Holder-provided high-power weapons, said this: “Hadiya Pendleton was me, and I was her.”

Speaking to concerned business leaders, Mama Obama compared herself to “a walking angel” who, soon after attending Obama’s Second Inauguration, was tragically cut down while talking with friends in Vivian Gordon Harsh Park.

After Hadiya’s murder, Michelle rushed to Chicago to attend the teen’s funeral and invited her parents Nate and Cleo to sit beside her in the State of the Union sky box.  Excelling at the liberal practice of exploiting death for political purposes, Mrs. Obama reminded her audience that in Chicago burying a child is not unusual and that young people are killed after “wandering onto the wrong street… [or]… standing on their own porch.”

Let me tell you, it is hard to know what to say to a room full of teenagers who are about to bury their best friend…I told them that there is a reason that we’re here on this earth, that each of us has a mission in this world, and I urged them to use their lives to give meaning to Hadiya’s life.

Clearly, Mrs. Obama believes she has a “mission in this world,” and that that self-appointed mission involves assisting her husband in mitigating the Constitutional rights of law-abiding Americans.  So to accomplish that goal, posing as an anti-gun raconteur Michelle relayed the heart-wrenching story of Hadiya’s untimely death.

According to Shelley O, “Hadiya’s family did everything right, but she still didn’t have a chance.” And so, because Cleo and Nate couldn’t keep their child safe, liberals like Michelle Obama who hold the collective view that our children are their children plan to step in to implement legislation they mistakenly believe saves lives.

Hey somebody, please tell Michelle Obama that while she was in Chicago speaking to business leaders about eliminating gun violence, an unarmed lunatic in Texas stabbed 14 people with a knife.

In Chicago, the first lady’s work was to get business leaders to agree that in the long run the survival of a future little Michelle Obama far outweighs the preservation of the tenets and freedoms that have abided for two centuries in the US Constitution.

The first lady’s purpose in going to Chicago was not to discuss reality, nor was it to reveal intriguing autobiographical insights about how she and Hadiya Pendleton are a lot alike. Instead, the true purpose of the trip was to prod America further along the road toward a society whose power-hungry government claims it’s attempting to eradicate gun violence by disarming its people.