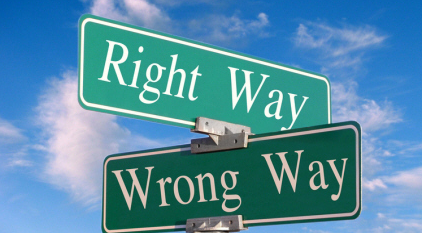 When I was a kid, my father used to say to me, “Right is right even if nobody’s right, and wrong is wrong even if everybody’s wrong.” That pearl of wisdom really stuck with me. Now, as an adult, and being the type of black-and-white person that I am, I’m extremely troubled by how moral relativism is destroying the fabric of society. My unwavering conviction and 34 years of Bible-believing Christianity inform my belief that fallible people acting as autonomous gods can only cause much suffering for everyone, regardless of what they believe.

Modern society has devolved to the point where the right to do whatever you want takes precedence over doing what is actually right. Killing unborn babies has morphed into the “right to choose,” sodomy has mutated into gay rights, and bilking the system as a way of life more than seven generations after the fact has become the right to reparations for slavery.

Double-destruction has befallen us, because the Bible says, “Woe to those who call evil good and good evil, who put darkness for light and light for darkness, who put bitter for sweet and sweet for bitter.” Moral relativism has delivered “woe” to those who refuse to acknowledge the true difference between right and wrong.

Thirty years ago, I had a conversation with a moral relativist that I’ve never forgotten. The young man was indignant that I dared to suggest that there are moral absolutes. My argument was that the Bible says that human beings intrinsically know the difference between right and wrong, indicating that, like it or not, there are standards. My point was that moral relativism is merely an effort to quell the conscience and make excuses for a sin nature that, without the constraints of God’s truth, is capable of fantasizing, stalking, trapping, and then cannibalizing another human being.

The moral relativist continued to stress that there are no moral absolutes and that the concept of right and wrong is relative to many factors. His premise was that the individual, not God or others, should judge personal truth. That’s when I asked him, “Oh, so if you lived next-door to a child molester and they felt that having sex with a five-year-old was acceptable, you’d be fine with them sexually abusing your child?”

My stammering opponent responded to that absurdity by saying, “That’s taking things a little too far!” I then asked, “Are you saying there is a standard for right and wrong, and the difference is that you get to set the standard?” That question was followed by a couple of seconds of heavy silence. I persisted: “So, in your opinion, raping children is wrong? Therefore, even though you don’t want God or society to impose their morality on you, you’re comfortable imposing your morality on the pervert with a lecherous eye on your preschooler?”

Shocking as it may sound, that particular person was so steeped in the desire not to judge or offend that he actually said, “Well, I guess I really couldn’t say anything, because it wouldn’t be my right to impose my standards on the guy next-door just because he likes to have sex with children.” For the committed moral relativist, chancing sacrificing his child to a molester is certainly a high price to be willing to pay to preserve the right to retain subjective (and in this case, disgusting) preference.

Currently, Americans live in a culture where individuals arrive at conclusions based on limited life experience, a faulty knowledge base, and ambivalent emotions, all of which are influenced by lies, skewed perception, and human weakness. Add to that the growing belief that moral values are not divinely mandated or commonly relevant, and you have a recipe for disaster.

That’s why, when I read stories like the one where an Oklahoma mother and her 11-year-old son were arrested after the little boy purportedly raped his 6-year-old sister and her mother told her not to tell anyone, I’m not shocked.

What’s shocking is the public’s response to a sexualized youngster raised in an atmosphere void of moral restraint acting accordingly. A young child violates his little sister, and the culture that’s guilty of fostering degenerate behavior asks why?

The bigger question here isn’t why things like that happen, but rather who among us has the right to say that what the boy did was wrong. Who has the right to tell a mother that failing to report forced juvenile incest is unacceptable? Isn’t drawing an ethical line in the sand and saying that there is something very wrong with a child raping a sibling and their mother attempting to cover it up imposing a standard of morality on a family whose measure of decency may be different from our own?

By adhering to the tenet of moral relativism alone, moral relativists and their ilk have zero right to oppose any kind of behavior, even if such perverse or evil conduct shocks them or negatively impacts their lives. Remember, the price of subjective preference can be very high.

The older I get, the more I understand what my father was saying. Attempting to run a society based on the belief that morality’s canon is independently decided upon seems like a great idea until some lunatic shoots up an elementary school or a prepubescent brother rapes his little sister. That is when the ramifications of a misguided ideology that preaches the abolishment of moral absolutes end up proving that “right is right even if nobody is right, and wrong is wrong even if everyone is wrong.”