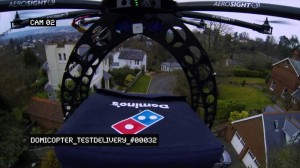 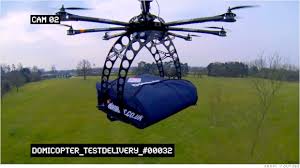 Drones delivering pizza is an exciting prospect.  It’s so exciting that Domino’s Pizza has uploaded a Youtube video in the UK and Ireland featuring the DomiCopter, which Domino’s promises will take “deliveries to new heights.”

Currently, it’s just a publicity stunt, but it has limitless possibilities if it comes to pass.  Think ‘medical marijuana’ and Chinese food.

Wait! Why limit it to egg rolls, doobie paraphernalia and pizza – how about a CondomCopter?  That would work!

Following Domino’s lead, the CondomCopter video’s caption could say, “See the latest delivery innovation from Contraceptive Central. The CondomCopter is on the job – taking whatever you please to new heights.”

It would work like this: Let’s say after eating too much pepperoni pizza, ahem, pepperoni-style passion ensues.  That would be the time to call the CondomCopter and request a delivery of the accoutrements necessary to make the night complete.

If you used up all your spare change on treating the girl of your dreams to Domino’s pizza, fret not; with free contraceptives and all, the delivery will come directly to your doorstep compliments of the American taxpayer.  The good news is that there’s no need to tip a drone.

If the system works out, in the future the CondomCopter can double up and make short work of fulfilling the amorous needs of romantics all across America by offering a combined pizza-and-prophylactic drone delivery package.