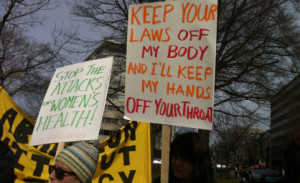 Recently pro-choice “keep your laws off my body” protestors in Texas were serious about aborting the unborn.

So much so that putting their hands, in a violent way, on anyone who tried to put laws on their bodies was apparently considered a justifiable form of hand-to-hand combat.

Supporters of Texas state senator Wendy R. Davis, the woman Barack Obama praised for her filibuster of a vote on abortion legislation that aimed to save the lives of fetuses over the gestational age of 20 weeks, threatened Texas representatives, including pro-life Jonathan Stickland and his staff.

The protestors vowed that if the right to destroy babies, agonizing death or not, over the age of 20 weeks was not upheld (btw, it was not), normally peace-loving pro-abortion types would respond with their usual measure of tolerance by seeking out and garroting pro-life throats.

Lest we forget, many abortion advocates are of the Mini Cooper-driving/Coexist/PETA ilk, unless of course the right to scald, slice, or suction the unborn to death meets with opposition.  Then all bets are off.  If conflict arises, the pick-a-daisy-for-peace/Patchouli incense-burning crowd turns into ‘face pummeling‘ barbarians who openly express heartfelt wishes for innocent women to be raped.

Plus, judging from what went on in Austin, Texas last week, in lieu of a live appearance from Moloch, it appeared that pro-choice advocates were of the mind to take to the streets to exercise their First Amendment right to free speech and religion by drowning out prayers being offered for the preservation of life with chants of “Hail Satan!”

“Hail Satan” or not, in response to that and other unseemly threats, while the proceedings were taking place members of Stickland’s staff were convinced it would be wise to take the necessary measures to ensure personal safety by carrying licensed, concealed handguns.

Wait, what?  Handguns? Conceal and carry?

What if the president who tweeted that he ‘stood with Wendy’ for her brave stance on behalf of slaughtering the unborn were to find out about the guns?  Isn’t he the guy fully dedicated to the safety of all children?  What if toddlers holding up signs saying things like “If I wanted the government in my womb, I’d f— a senator” were accidentally shot by pro-lifers protecting themselves from the minions of hell manifested on the steps of the Texas State Capitol?

For those he considers friends, correction is never offered, by telephone or otherwise.

Therefore, although he is usually concerned, first and foremost, about the safety of innocent Americans, for some reason Barack Obama has not felt moved to dial up the rowdy individuals demanding the right to kill babies. Nor has he requested that in the future they represent his radical pro-choice policy stances by comporting themselves as living examples of love, kindness and mutual respect.

And about that shocking invocation of Satan being shouted out by rabid pro-choice activists? Well, we already know that the former community organizer’s favorite author, Saul Alinsky, dedicated Obama’s favorite tome Rules for Radicals to the same entity that the women hailing Satan were giving public honors.

Based on the Alinsky precedence, there’s really no reason for the president to admonish crowds of enthusiastic abortion supporters for participating in what anyone other than him would consider inappropriate prayer and supplication.

Most importantly, because the president has never been shy about inserting himself into state-level politics (think Arizona immigration law), or local news for that matter (think Henry Louis Gates Jr.), the only conclusion one can come to is that Barack Obama is expressing his opinion on Texas’s SB5 with his silence.

Thus, by saying nothing, Obama sent a message that he is of like mind with the grace-confronting group who forced cherubic toddlers to hold up crudely drawn pictures of wire hangers.

Suffice it to say that it’s likely Barack Obama agrees that, henceforth and in perpetuity, whenever the right to execute the innocent is obstructed it would be perfectly acceptable to abandon the peacetime tactic of quietly slaughtering 3,000 babies a day and take up arms against those who want to stop the shedding of innocent blood.