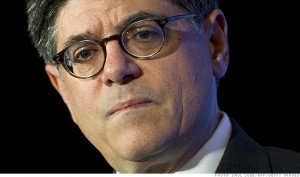 Kudos to Chris Wallace of Fox News Sunday for doing his patriotic – and journalistic – duty during a verbal wrestling match with Treasury Secretary Jack Lew.  The bout resulted in Jackie boy being pinned to the mat.

Much to his chagrin, Jack came up against a logical, fair and smart journalist who, on behalf of America, outlined the incongruous series of statements coming from the Obama administration, which were accompanied by simple questions to the befuddled Lew.

Wallace skillfully exposed how bogus this administration’s arguments and excuses are proving to be.  After Mr. Lew stressed that Congress failing to raise the debt ceiling will be “catastrophic,” not to mention “irresponsible and reckless,” Wallace then asked him, if that’s true then why is the president refusing to negotiate?

For the first half of the interview, when discussing the budget, Lew appeared flustered, and finally suggested Congress just “do its job.”  Said Lew to Wallace:

You know we’ve just spent the last several months with Congress creating this ridiculous choice where either you repeal the Affordable Care Act or you shut down the government or default on the United States. That is not the way we should do business.

Before segueing into the healthcare discussion, Wallace should have pointed out that, based on the fiasco called ObamaCare, the president shouldn’t be telling anyone to do their job until he does his.

Predictably fearless, Chris Wallace probed Jack Lew with inquiries that the mainstream media simply refuses to broach.  Take this one, for instance:

The public exchanges in ObamaCare opened this week… the government Web site was a mess… You have had three years to prepare for this week. If I already had doubts … about the government’s ability to oversee a sixth of the economy, shouldn’t this just add to my doubts?

Lew attempted to outwit a pro by razzle-dazzling him with unsubstantiated facts:

You know, Chris… I actually think that is not what’s happened this week. What happened this week is we saw seven million people rush to go onto the Web page to find out what are their choices in this new marketplace to buy affordable health care.

Doing something most journalists refuse to do, Wallace countered with a pointed question:  “How many actually signed up, sir?”

His face conveying panic, Lew’s weak retort was, “You know they have six months to sign up. This is a big decision.”  Wallace, undeterred, did not shrink away: “How many signed up?”

So after Lew cited a number of seven million visiting the site, when asked how many signed on, Jack nervously replied,  “I — I don’t have the exact number. But the question isn’t [.]”

Wallace shot back: “Do you have any number because the government has refused to…”  Endeavoring to control the interrogation, Mr. Lew cut in saying that Wallace’s question about how many signed up is the “Wrong question.”

Wallace persisted: “Tell us how many!”

Refusing to be dissuaded, Wallace informed a clearly uncomfortable Lew: “No, it isn’t…the question is, how many people have actually signed up?”

Rather than answer, Lew defaulted to the Obama script, saying that millions rushed to get information from websites that everyone knows don’t work.  Mr. Lew argued that many didn’t sign on because healthcare is an “important decision that takes time for people to make and people are comparing options.”

After he blamed undecided people, Lew then blamed software issues saying many will wait until the “.3 or .4” editions come out to sign on.

Then Lew said, “So many millions of people rushed to get in, [which] shows how much interest there is … in getting health care.” That’s when Wallace should have rolled Lew for data verifying the number of “rushed-to-get-in” hits.

Let’s face it; much like his boss, Mr. Lew isn’t used to being forced by a responsible journalist to give honest answers to questions he’d rather not answer, but Chris Wallace, who’s unafraid, soldiered on:

I’m going to ask one last time, because, forgive me, sir, you haven’t answered it. Do you not know how many people have signed up? Which should seem to indicate another major software glitch? Or is it that the number is embarrassingly small?

Probably scanning the studio for the nearest exit, Lew responded:

To which Wallace countered: “The answer is they couldn’t.”

Moreover, how predictable is it for a representative of the president to accept an invitation to appear on a Sunday cable news show the week ObamaCare signups begin and then dodge questions because, much like his boss, providing honest answers is way “above his pay grade?”

Instead, the man who doesn’t have knowledge of or access to data feels that “the important issue here is that millions of Americans want to get affordable health care.”  On what basis does he conclude that?

Lacking statistics, Lew told a Sunday cable news show that “They came online. They’re getting the information,” and – sans figures – he assured America that millions are clamoring for healthcare they’re unable to sign up for.

In the Obama world it’s “a very important development” that unknown numbers of uninsured people want to enroll in something Chris Wallace rightly pointed out is inaccessible.

In the first half of the interview, Jack Lew criticized Congress for not doing their job. Then, in the second half, consummate professional Chris Wallace did his job by doing a job on Jack Lew.