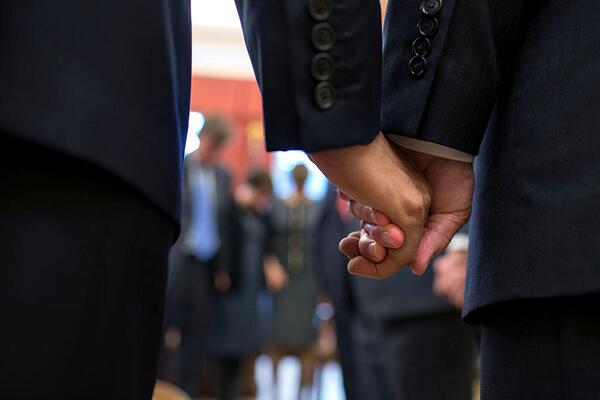 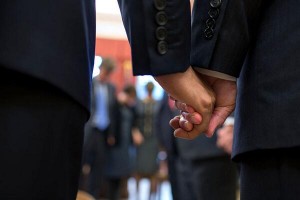 Some may find it heartwarming, others may find it disturbing, and still others might find it downright weird! The oddity in question is the picture, tweeted out by White House reporter Pete Souza, featuring the abortion-supporting Roman Catholic Vice President Joe Biden and Barack Obama, the crucifix-covering Commander-in-Chief, grasping each other’s hand in prayer.

The president and his main squeeze … er, I mean main sidekick, Joe Robinette Biden, Jr., gathered together with other faith leaders to discuss how to go about foisting thirty million gate-crashing interlopers on the American people.

At the end of the meeting, Mr. Biden and Mr. Obama joined in circle time to beseech the Lord (whose name Obama chose to delete from his snippet of the video for 150th anniversary of the Gettysburg Address on YouTube).

The heartwarming moment took place while asking an unnamed higher power for blessings and direction on how to go about finding a way to allow criminals who broke the law to remain in America.

Marion Robinson, Mr. Obama’s mother-in-law, who allegedly is a woman of faith herself, was not in attendance, nor was her headless chicken. Neither was Mrs. Obama, whose newest Scriptural-style mantra on behalf of rescuing Obamacare is “there but for the grace of God go I.” Going forward, at least for a season, it looks like out of context New Testament Bible verses will be replacing Michelle’s usual “give up their piece of pie” Marxist gobbledygook.

The two men, although lacking that feminine touch, seemed fully aware that divine intervention would be needed to convince the uncooperative American public who pay their salaries to submit to an illegal invasion. Which may be why the meeting ended in prayer and supplication.

Anyhow, unbeknownst to the contemplative duo, while Joe and Barry held hands with heads bowed, Souza zoomed in and snapped a close up of the men clinging tightly to each other while agreeing in prayer.

The result was a historic record of two great leaders, unabashed in their devotion to God. America’s momentous half-black Muslim-raised president Barack Obama and Joe the Irish-Catholic guy with the bad hair plugs simultaneously displaying affection for each other while humbling themselves before the Almighty in the name of comprehensive immigration reform.