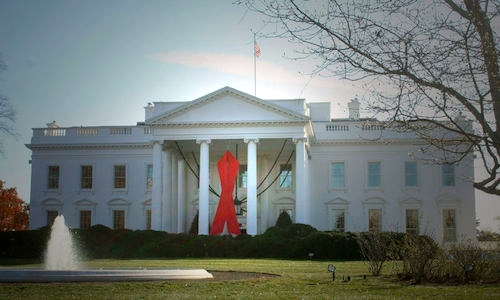 Blustering Obama was out there again, taking credit for things he didn’t do and vowing to “fundamentally transform” yet another crisis.  One would think that with the mess he’s made of the U.S. health care system and the damage he’s done to millions of innocent Americans, he’d shun making health-related promises, but no.

In honor of World AIDS Day, in addition to hanging a humongous red ribbon on the White House, Obama vowed that the U.S. would “be at the forefront of the discoveries how to put HIV in long-term remission without requiring lifelong therapies. Or, better yet, eliminate it completely.”

Rather than focusing on figuring out how to fix the mess he’s made with the new health care law, Barack the multi-tasker is shifting $100 million to the National Institutes of Health to be dedicated to AIDS/HIV research.  Where exactly that money will come from, the president didn’t say, but as usual he’s pledged to provide it.

It doesn’t matter where the funding comes from anyway, because the hope is that in addition to single-handedly killing Osama bin Laden, Obama’s legacy will also include being credited with funding the cure for AIDS.

Far be it from me to point this out, but Barack Obama can’t even figure out how to ensure that more than three people at a time can log on to healthcare.gov, nor does he seem to care that the unwilling Americans he’s herded toward the online marketplace are giving up any “reasonable expectation for privacy.”  And yet, in the midst of what can only be described as an unmitigated disaster, the president has decided to turn his attention toward eradicating AIDS?

Yes he has!  Which is why, in observance of the 25th annual World AIDS Day, President Obama spoke from the White House South Court Auditorium, where, in addition to plugging his failed Obamacare effort, he also made many promises that should have been received by those in attendance with a very large grain of salt.

President Obama vowed to find “new therapies” and pledged that the nation where his policies have resulted in complete turmoil would “remain the global leader in the fight against HIV and AIDS.”

Right about now, Barack Obama can assume credit for many things, but if he desires to avoid humiliation, global leadership is a topic he should probably steer clear of.

Nonetheless, humiliation be damned, because Barack Obama certainly isn’t the type of guy to sit by and allow G.W. Bush to get all the credit for the progress made saving millions of lives with the former president’s Emergency Plan for AIDS Relief, or PEPFAR.  So Obama upped the ante and announced a three-year $100-million HIV Cure Initiative.

What Barack Obama fails to comprehend is that the reason PEPFAR has saved millions of lives in Africa is because George W. Bush’s mindset was radically different from how liberals think about poor, uneducated people.  Closet racists like Barack Obama typically believe that underprivileged black people are unable to assume responsibility for themselves.

Bush begged to differ with that premise, and with full faith and confidence believed the African people were more than capable of assuming responsibility to take their antiretroviral drugs.  Despite the naysayers, the former president moved forward with the initiative and was proven right.

To this day, the program Bush started continues to treat millions with antiretroviral drugs that extend lives and prevent HIV from spreading.

Okay, granted, G.W. Bush may have brought AIDS relief, but this is Barack Obama, the healer of the planet we’re talking about here, and in his deluded mind, he’s the only one capable of delivering the long-anticipated cure!

That’s why, back at AIDS Awareness Day, Barack Obama did what he does best, which is to offer platitudes and flowery speeches about cures and expound about the “world without AIDS that he wants for his daughters.”

And so another $100 million is spent, this time to “chart a different future, guided by our love for those we couldn’t save,” Obama declared, and to ensure that Sasha and Malia will be part of the long-awaited “AIDS-free generation.”  As for the babies, Obama promises that — no thanks to his efforts — if they’re not aborted first, the world’s children will be born without AIDS.

But in the meantime, the president and his substandard website are still the laughingstock of the country.  In addition, five million people, including small children with cancer, have been canceled from their health insurance, 50 million more currently insured Americans are due to meet the same fate, and the guy at the center of a debacle of his own making is moving on to curing AIDS.