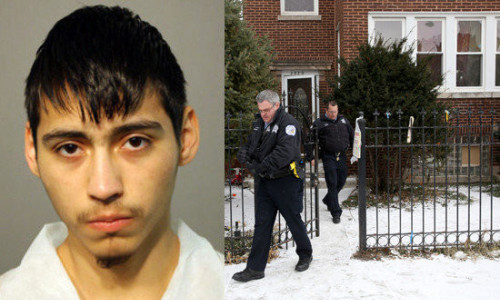 So far it’s unknown whether the 18-year-old Chicago dweller charged with killing his aunt’s boyfriend with a hammer and then decapitating the man was one of the DREAM actors Obama wants to grant amnesty.

Nor is it known if the killer was brought to America illegally by a mother and father, or whether this particular psychopath ventured across the border on his own.

Either way, based on the details of the slaying, cross-culturalism has officially made its way north from Mexico to the Windy City of Chicago, Illinois.

Alexis Valdez was living with his aunt and her boyfriend Silvestre Diaz-Hernandez, a man who migrated from Guerrero, Mexico. Not to stereotype the close-knit familia, but if one were to speculate on whether or not the alleged killer was legal, living in a small basement apartment with an aunt and her boyfriend does indicate that Mr. Valdez probably didn’t get here via legitimate channels.

Nonetheless, the agreement was that Alexis could live with the couple as long as he went to school and worked to contribute to the family expenses. The teen didn’t particularly want to do either of those, which is why he was asked to move out.

On Christmas Eve, Valdez and Diaz-Hernandez went out to buy beer. When they returned home, Valdez, who was furious about being asked to leave, took a hammer he had hidden behind the door and used it to kill Diaz-Hernandez.

Valdez was so enraged that according to Assistant State’s Attorney Kingsley Sawyers, he said he did it because this Christmas he “wanted to leave his aunt a present.” So, after bludgeoning Mr. Diaz-Hernandez and decapitating and dismembering his corpse, Alexis placed the severed head on his aunt’s bed.

According to Sawyers, for added gore and impact, the killer used a butcher knife to cut the ears, nose and mouth off of his victim’s face and pulled out the eyes with his bare hands.  He also dismembered Diaz-Hernandez’s arms, and sliced the remaining torso from the man’s neck to the pelvis.

Then, being the honest type, after tiring himself slaughtering his victim, Valdez called 911 to report the murder.  When the dispatcher asked if he gave Diaz-Hernandez CPR, Valdez bluntly informed the operator that Silvestre had no head.

Police responded and found the alleged murderer standing outside the basement apartment covered in blood.  After being taken into custody and charged with first-degree murder, Valdez told the arresting officers that he had planned to kill his aunt too, but he couldn’t because she was at a Christmas party.

Here’s where the glorious ethnic mosaic is revealed:  North of the border we pardon turkeys, while in Mexico thousands upon thousands of human beings have been slaughtered in a bloody drug war, many of whom ended up headless in the process.

Drug cartels torture and behead rival gang members; a jealous husband cuts off his wife’s head; a woman is beheaded for snitching and stealing; and children are hired to decapitate grown men with steak knives.  Heads roll onto disco dance floors, corpses without heads are found lined up on sidewalks, and 49 decapitated bodies were even found lying alongside a Mexican highway.

Zapata County, Texas Sheriff Sigifredo Gonzalez Jr., who has witnessed the violence on the border and admitted that despite his constant exposure to the carnage, never stops being shocked by it, warned that it’s getting worse.  The Texas sheriff cautioned that Mexican drug cartels have taken up residence in more than 200 American cities.

Gonzalez said, “I am even more nervous about this practice spilling over into U.S. cities.”  Ya’ think?

Flash back to January 2012 when a headless body was found in the desert west of Tucson, Arizona.  And wasn’t it just a few weeks ago also in Chicago that illegal immigrant Milton Miranda-Portillo beheaded and dismembered Jose Reyes because Milton was suspicious Jose was interested in his girlfriend?

What is interesting is that after Los Angeles, Chicago’s Mexican community is the second largest in the US.  Which means that one way or another, Alexis Valdez made his way to Chicago, and based on his gruesome behavior, brought with him some of the cultural diversity that gives Mexico the colorful reputation of being home to mass beheadings.

It is unknown as of yet whether Mr. Valdez is an illegal, or if he’s even of Mexican descent. But one thing is certain:  Alexis picked up his masterful decapitation skills somewhere, and thereby contributed a good dose of Mexican culture to the diverse ethnic community we now proudly call America.