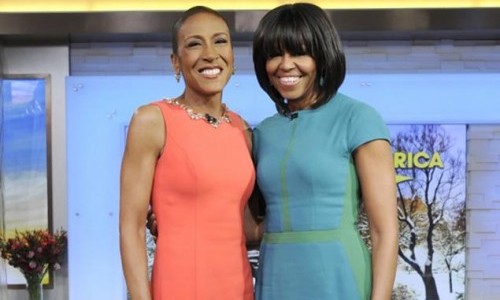 Isn’t Michelle Obama supposed to be on vacation?  Thought so!

Yet the first week she was in Oahu, she found the time to track Santa Claus’s sleigh as he flew over Africa and places like bomb-riddled Egypt and war-torn South Sudan, a nation steeped in civil unrest.

On Christmas Eve the first lady told kids calling in to NORAD:

I see his sleigh with eight tiny reindeer and he is over Sudan — South Sudan. That’s in Africa. And right now, he’s delivering some gifts. He’s going down, swooping down to some little kids who are in South Sudan, OK? That’s where he is right now. It’s really, really very cool, don’t you think?

What else is this busy lady doing on vacation?  Hopefully, showing she cares by polishing her husband’s golf clubs, as he is spending lots of time puttering around on the links.

Regrettably, Mrs. Obama couldn’t find time to make it to church for Christmas Day, but somehow managed to fit in dinner at Alan Wong’s, her favorite restaurant in Hawaii.

But most importantly of all, on behalf of the sexual orientation-obsessed White House, the first lady of the United States squeezed in a congratulatory Tweet to Good Morning America three-time hero, Robin Roberts.

Robin has been a hero twice before. First, the GMA host survived breast cancer. Then, five years later, allegedly as a result of the chemo she received to treat the breast cancer, Robin came down with myelodysplastic syndrome, a pre-leukemia blood disorder that required a bone marrow transplant.

However, both of those pale in comparison to Robin Roberts’ third valiant act.  Ms. Roberts chose to celebrate her gratefulness for surviving her medical travails by following soon-to-be-wed weatherman Sam Champion’s lead and coming out as a lesbian on Facebook by thanking her longtime girlfriend of 10 years, Amber Laign.

Vacation or no vacation, Michelle Obama was so ecstatic about Robin’s public acknowledgement of her homosexuality that she joined together with her occasional dance/push-up partner, Ellen DeGeneres, and raunchy lesbian comedian, Wanda Sykes, and gave a virtual shout-out to Robin all the way from Oahu.

Robin Roberts gets Michelle’s attention because, after all, she’s a black breast cancer- and bone marrow transplant-surviving lesbian in an interracial relationship who is also a fawning member of the left-wing media.

That must be why Mrs. Obama Tweeted to Robin: “I am so happy for you and Amber! You continue to make us all proud,” signing the tweet “mo.”

It appears that when it comes to Robin Roberts, the first lady is both happy and proud.

And is Robin’s pride – as in ‘gay pride’ – what makes Michelle and whoever the “us” is “proud,” or is “mo” just referring to being proud of Robin merely for surviving cancer and a brutal bone marrow transplant?

Either way, it’s nice to know Michelle Obama is so in touch with the things that matter here in America.

What other first lady has been so willing to selflessly take time out of a 17-day/$4 million vacation to personally congratulate the newest celebrity member of the LGBT community for being an example to everyone?