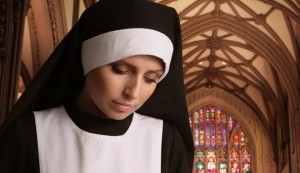 What happened couldn’t have come at a worse time for the Little Sisters of the Poor.  Seems a 31-year-old nun from El Salvador who belonged to the order of the Little Disciples of Jesus, located in Rieti, north of Rome, Italy, just gave credibility to Barack Obama’s argument that a vow of chastity doesn’t exempt women belonging to a religious order from needing birth control.

Currently, the Obama administration is trying to force the Little Sisters of the Poor to submit to the birth control mandate in the Affordable Care Act, against which the nuns who work with the elderly poor are fighting in Supreme Court.

Now, lending a measure of credibility to the president’s argument is a Little Disciple of Jesus who, after complaining of stomach pain and being rushed to the hospital in Italy, recently gave birth to a baby boy.

Notwithstanding other nuns noticing that the pregnant prioress was bulking up a bit, for nine months the expectant sister, I mean mother, was able to keep her condition secret.  One nun said, “We noticed she had put on weight but recently she had kept to herself.”

The nun was either in extreme denial, incredibly naïve, or attempting to convince the church in Italy that there had been a second Virgin Mary, aka the Immaculate Conception, because en route to the hospital she continued to deny that the protuberance under her habit was actually a baby.

In the throes of labor, Roxana Rodriguez kept saying, “It’s not possible, I’m a nun.” A few hours later, much to her surprise, a bouncing 7.7 lb. baby boy proved that under certain conditions (such as breaking the vow of chastity), even a nun can have a baby.

Nevertheless, as a tribute to Pope Francis, Sister Baby Mama named the babe Francesco, an honor the pontiff could probably do without.

The woman’s mother superior, Sister Erminia, suspects that the sister’s condition came about because “she was not able to resist temptation.”  Therefore, in lieu of potential fathers residing in the retirement home where the woman was tending to elderly residents, the unconfirmed theory is that she conceived the child last year during a visit home to El Salvador.

Although the mayor of Rieti and the local diocese offered help to both mother and newborn, the church in Italy is embarrassed and says that for breaking her vow of chastity, mama and bambino will have to leave the nunnery.

Speaking on behalf of the bishop of Rieti, spokesperson Delio Lucarelli said “It would be preferable that she now lead a secular life with her baby, away from religious institutions.”

Meanwhile, thousands of miles away in America, Barack Obama continues to insist that a religious order of nuns clearly not plagued with similar self-control issues submit to his oppressive ObamaCare birth control mandate.

Regrettably, the plight of the pregnant nun, although a rare event, could provide Obama with the example he needs in his fight against religious freedom in America.

President Obama is so shameless in his quest to trample First Amendment rights that he’d probably have the gall to suggest Little Sisters need contraceptives for visits home (and of course to protect them from the male nursing home residents still capable of siring papal namesakes).

Either way, thanks to Italy’s Baby Mama nun, Obama now has ammunition against the Little Sisters of the Poor that he can use to support his bizarre contention that nuns should make free contraceptive coverage available to everyone who works and lives in a convent.

And to hammer home that point, don’t be surprised if the president invites the El Salvadorian mother and child to be this year’s special guests at the State of the Union address.