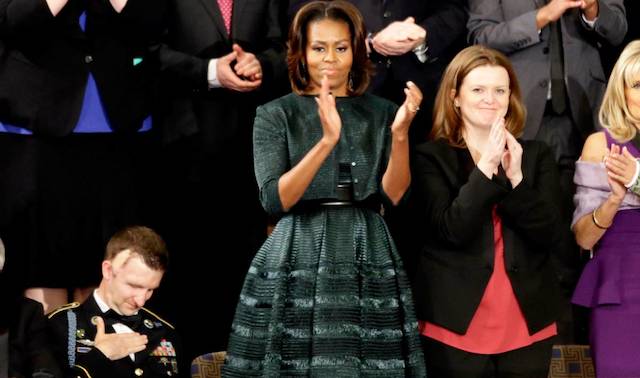 One week after partying in the White House with millionaires and billionaires for Michelle’s 50th, the pre-SOTU buzz was that the president was planning to address income inequality and the minimum wage, among other non-issues Americans aren’t concerned about.

Determined to get the president’s attention, notorious aisle-hugger Sheila Jackson Lee showed up in a two-piece suit the color of a wad of Bazooka bubble gum or perhaps a drippy bottle of Pepto-Bismol.

As for Michelle Obama, in an effort to counterbalance the ocular assault, the woman who spends America’s money like a drunken sailor must have thought it would be a good idea if she wore the dress she had on for Barbara Walters‘ 2012 Christmas interview.

Burrowing deep into her closet, Michelle located the dress, which was designed by Azzedine Alaïa, a Tunisian Paris-based couture designer whose shoes start at $2,000 a pair.  Then, like the moneyed elitist she is, the FLOTUS subjected a nation in economic pain to the sight of her descending the stairs and making her way to her seat wearing a shade of forest-green that came curiously close to the color of money.

As Barack Obama spends his time in office destroying what Ronald Reagan built, after being popular in the 1980s Azzedine Alaïa is suddenly making a comeback.

Mrs. Obama’s Alaïa featured an oversized belt that cinched in at the waist with a flouncy A-line skirt, decorated in silk stripes and topped with a cropped jacket that sported three-quarter-length bicep-concealing sleeves. Oh yeah, and some very unappealing black opaque tights.

Immediately following the SOTU, Mrs. Obama headed straight to California to fulfill her husband’s call to address “income inequality” by way of fundraising. Michelle might even feign thriftiness by wearing her Azzedine Alaïa a third time to a scheduled gathering attended by those who managed to raise $32,400 per guest.

Way back in 1995, Mr. Alaïa was mentioned in the movie Clueless, a flick about another spoiled rich girl with a wardrobe full of haute couture named Cher Horowitz.

In one scene, Cher, played by actress Alicia Silverstone, goes to a party wearing a snug red dress with matching red shoes, topped off by a fluffy black boa. After leaving unescorted, Cher is mugged in a parking lot outside a liquor store. The gunman instructs Ms. Horowitz to get down on the ground.

Hesitant to dirty her pricey frock on the oil-stained asphalt, Cher responds, “Oh no, you don’t understand! This is an Alaïa!” – as in Azzedine Alaïa.

Cher responds, “It’s like a totally important designer,” to which the gunman angrily retorts, “And I will totally shoot you in the head. Get down!”

Speaking of ‘clueless,’ reading about what Michelle chose to wear to the SOTU in an article entitled Michelle Obama’s State Of The Union Dress: She Stuns In Alaïa Ensemble, what immediately came to mind was ‘Oh brother, she stunned alright! The nation is a mess, and this woman shows up in haute couture?’

Then again, on second thought, while her husband pulls off a national stick-up, ‘clueless’ Michelle wearing “an a-what-a” was quite apropos.