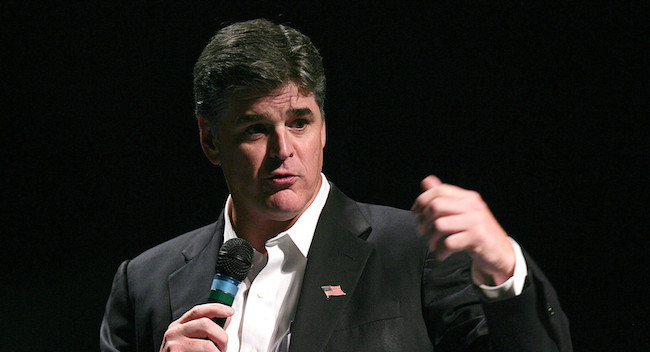 The State of the Union is going to be great! Here’s why: Sean Hannity will be the guest of another vocal critic of the President, Texas Representative Louie Gohmert.

Besides the sheer gloriousness of Sean Hannity being among the live spectators, what will really be entertaining is to see how Sean’s presence rattles Barack Obama.

Let’s face it…the star of the State of the Union address is such a narcissist that having Sean Hannity anywhere within 10 miles of the Capitol will drive him absolutely nuts. Don’t be surprised if the vindictive brat instructs the Secret Service to find a reason, any reason, to escort Hannity off the premises and forbid him from entering the House Chambers.

One thing’s for sure – if Sean does manage to get inside and Barry spots him in the crowd, the Teleprompter man will not be able to control the snide remarks. It’s almost guaranteed the “Caricature” will reference hateful talk radio hosts, people who divide rather than unite, and mention those  responsible for his failures because they spew vitriol over the airwaves day after day.

The only thing better than Sean staring down the president at the State of the Union address would be to have Rush Limbaugh park himself front and center and blow cigar rings skyward as the Prevaricator spends the hour prevaricating.

Just for fun, maybe Sean can elbow notorious “aisle hog” Shelia Jackson Lee out of the way as the Sergeant at Arms yells, “Mr. Speaker, the President of the United States,” and lean in for a face-to-face handshake as Obama works his way to the podium.

Either way, for personal protection, Hannity should at least coordinate a small section of likeminded people.

For instance, Sean should sit in between Louie Gohmert (R-TX) and Representative Joe ‘You Lie’ Wilson of South Carolina. Hopefully he’ll be able to convince those two truth tellers to sit right behind the star of the 2010 State of the Union, that insubordinate head shaker, Supreme Court Justice Samuel Alito.

It would never happen, but it is fun to fantasize Hannity introducing some lighthearted fun into the evening.

For starters, Sean could bring a kazoo. Then, every time Obama slips into that sibilant mode and starts that little whistling “S” or “SH” speech impediment thing he does, Sean could stand up and blow the kazoo.

For those who need a definition of sibilance, it’s a speaking style that produces the sound of a whistle or the hiss of a snake.

Sib·i·lance: characterized by or producing a hissing sound like that of /s/ or /sh/

Then, when Obama introduces the ‘Poor Me’ gallery dwellers and Michelle Obama’s special guests, who’ll likely include any or all of the following: upstanding illegals, women forced to buy their own birth control, income inequality targets, a potential ABC ‘Gay Bachelor,’ a misunderstood Iranian nuclear scientist, and Beyoncé and Jay-Z, that would be the perfect time for Sean to whoot-whoot and throw red, white and blue confetti.

For the lying portions of the address, which will be peppered throughout, it would be awesome if Sean stood on his seat, pointed at the president with a foam finger, and in honor of the military blew a Navy Boatswain whistle? Sean could rise above the sea of liberal Democrat applause and just let loose with the “Pipe Down” command on the boatswain pipe.

There’s no doubt having Sean Hannity in the house is going to make Mr. Suave Bolla Barack very uncomfortable.

On January 28, 2014, even without Hannity being able to antagonize Obama with kazoos and foam fingers, just his presence in the same room as the president will make the grueling yearly SOTU actually worth watching.