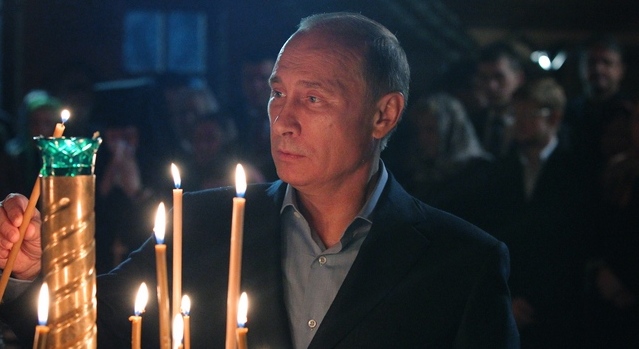 The moral disintegration must be pretty bad if a former KGB officer and current leader of what once was a communist regime feels moved to reprimand Euro-Atlantic nations established primarily upon Judeo-Christian values by calling them “godless.”

Since the fall of communism, religion now plays an important part in Russian life.  Rest assured: communists who’ve lived through state-established atheism surely recognize the obliteration of religious expression when they see it.

That’s why it’s pretty chilling to hear Vladimir Putin hurling accusations at the West and pointing out that what’s going on is identical to what went on when communism was established and religion was completely expunged from the Soviet Union.  Between 1917 and 1937, almost a quarter of a million Christians were executed, and churches that survived destruction were converted into things like museums of atheism.

Russian President Putin, who hasn’t been shy about expressing his disapproval of homosexuality and has banned what he defined as “homosexual propaganda,” had this to say:

Many Euro-Atlantic countries have moved away from their roots, including Christian values. Policies are being pursued that place on the same level a multi-child family and a same-sex partnership, a faith in God and a belief in Satan. This is the path to degradation.

Speaking to his people in the state of the nation address delivered at the end of last year, the Russian president defended traditional values, pointed out the moral bankruptcy of the West, and maintained that conservatism, both religious and societal, is what prevents what he defined as worldwide “chaotic darkness.”

Quite the opposite of what goes on in America, where these days the only form of permissible discrimination involves the denigration of conservatives and people of faith, in Russia, it’s now a criminal offense to “insult” the religious sensibilities of believers.

So it’s come to this.  In lieu of a president who respects Judeo-Christian values, an ex-KGB officer from a formerly atheist country is actually warning the West about how godlessness results in the kind of “chaotic darkness,” “belief in Satan,” and “path to degradation” that America is currently on.

But what’s ironic is that in this case, a leader who should be viewed with extreme caution is actually speaking truth to nations hell-bent on repeating Soviet Russia’s mistakes.