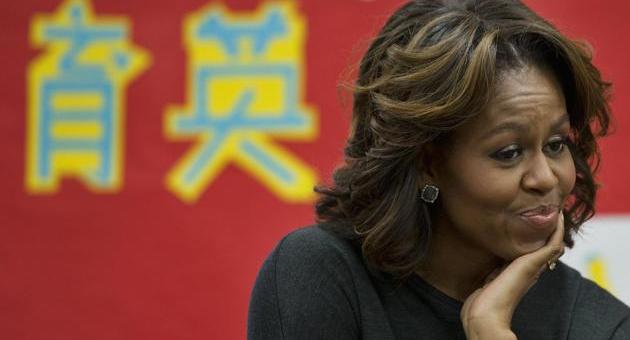 After being holed up for at least two weeks in the White House, Michelle Obama must be itching for another exotic getaway.  With superpower tensions at an all-time high, now is as good a time as any to take a multi-generational mother-daughter vacation to China.  Never mind that Michelle’s vacation destination is busy amassing the fiercest military force on the planet and partnering with Vladimir Putin, who just tested an ICBM.

Rising above silly little squabbles, Michelle is packing up mom Marion and daughters Malia and Sasha.  The traveling quartet and a huge entourage will board Air Force Two in mid-March at God knows what flight cost per hour – courtesy of the U.S. taxpayer – and wing westward for 13 hours toward China, which, quite frankly, is quite a ways to travel for authentic Kung Pao chicken.

Upon arrival, Michelle plans to visit with China’s foxy steel drum-playing first lady Peng Liyuan.  But before she does, the FLOTUS has “some ‘splainin’ to do!”

Last year, when Chinese president Xi Jinping and his wife were in California for a “trust-binding” summit with Barack the Golfer at Rancho Mirage, Michelle chose to forego the formalities and instead sent a note inviting herself to China.

And although diplomacy is paramount, the real reason Mrs. Obama is venturing forth is to try to credibly represent a country that continues to lag in educational achievement.  Apparently, the first lady feels that in addition to minimum daily requirements and human hydration needs, she is also qualified to educate Chinese students.

Whoever agreed to allow Michelle to come to China and talk about education has to know that she is the wife of an allegedly learned man who never read the health care bill, relentlessly pushes junk science, and, considering the sad state of the U.S. economy, clearly lacks basic math skills.

What is it exactly that Mrs. Obama will be sharing?  According to the Program for International Student Assessment (PISA) survey, Shanghai, China tops the world in math, reading, and science.

That’s why Meddling Michelle talking education to children who run rings academically around most Americans, including her, is not very different from her brilliant suggestion that U.S. housewives need government help deciphering product labels.

The Organization for Economic Co-operation and Development’s deputy director of education, Andreas Schleicher, claims that part of the reason Shanghai pupils do so well is determination and the self-confidence to fulfill their potential.

Jiang Xueqin, deputy principal at the Tsinghua University High School in Beijing, stressed that “Shanghai’s success is a product of a culture that prioritizes academic achievements over other pursuits.”

Does Jiang mean “other pursuits” such as foam-finger twerking, doing the Dougie, and memorizing lyrics to songs by Sasha and Malia’s role model, Beyoncé?

Shanghai students’ self-motivation and desire to succeed won’t stop “Race to 36th Place” Michelle from imposing her expertise.  After all, their top ranking in academic superiority shouldn’t derail FLOTUS’s plans to lecture the academically diligent and determined about the importance of diligence and determination.
The first lady will most assuredly expound on how, despite seemingly insurmountable odds, a lanky black girl managed to attend an Ivy League college, graduate Harvard Law School, marry a community organizer/future president, acquire a closet full of $12K party dresses, and vacation at Oprah’s place.

In a White House blog post, Michelle pointed out that she’s going to China because “countries today are no longer isolated and face many of the same challenges, whether it is to provide students with a good education, combat hunger, poverty and disease or address threats like climate change.”

What Mrs. Obama didn’t mention to her low-information blog followers is that while America is being sucked down a rabbit hole of debt, danger, and despair, the fact that she even mentions “climate change” sheds light on why the USA is in 36th place.

In her pre-trip post, Mrs. Obama also wrote: “I’ll be focusing on the power and importance of education, both in my own life and in the lives of young people in both of our countries.”

FLOTUS insists that the “China visit is important because it is the most populous country in the world, with more than 1.3 billion people, and is an important world actor.”  Wait – more important than Congo expert Ben Affleck?

While reorienting the Orient, maybe Michelle can help level the educational playing field by suggesting that the Chinese, whose mathematical proficiency results from old-school rote memorization, adopt Common Core math.

But if Common Core subtraction is too confusing for the children, Mrs. Obama can always switch over to basic addition.

For fun, she can calculate the cost of a few of her recent taxpayer-funded excursions: $11 million for a 13-hour trip to and from Nelson Mandela’s funeral + $5 million to fly to Ireland + almost $8 million in family vacation flight expenses + $2 million flying alone from parts unknown + approximately $100 grand flying back and forth to Aspen.

Then Michelle can explain to the youngsters why it is humanly impossible to pay back the $1.2 trillion America owes China.

Meanwhile, in addition to learning to handle chopsticks, picking up pointers on how to institute an American version of China’s one-child policy, and trying to cajole her hosts into tacking the cost of her luxury hotel accommodations onto America’s running tab, Michelle the raconteur can share with the Chinese pupils inspirational tales of how to “fundamentally transform” oneself from a low-level social climber into a high-level government parasite.

No doubt Chinese youngsters living in a country where the average salary is $656 per month in U.S. dollars will be riveted to Mrs. Obama’s triumphant hard-luck “working-class kid from the South Side of Chicago” story.

After inspiring Chinese schoolchildren to new educational heights, the FLOTUS can then remind them that if she could do it, so can they!  Because even in communist China Michelle Obama’s mantra is: “My story can be your story!”