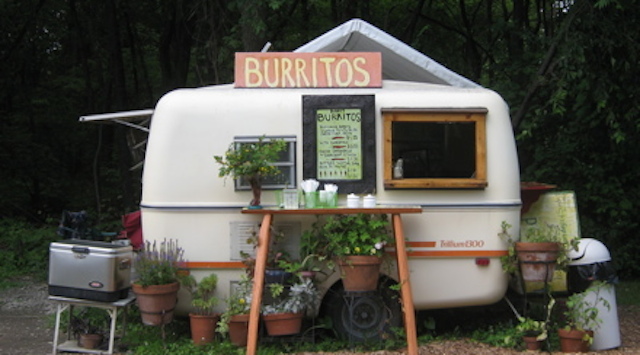 Remember when candidate Barack Obama told Joe ‘the Plumber’ Wurzelbacher that “my attitude is … when you spread the wealth around, it’s good for everybody.”

Mrs. Obama backed up the “spread the wealth around” message, but Michelle’s example involved food.

FLOTUS maintained that in order for equity to abound in America, “someone [would have to] give up a piece of their pie so that someone else [could] have more.”

It was only a matter of time before Americans would feel emboldened enough to take the president and first lady’s redistribution comments literally and demand half of someone’s ‘pie,’ a couple of glugs of a Starbuck’s latte or, as in a recent case, half a burrito on a park bench outside a Mexican grill.

Here’s how it happened:  Concerned only with his own selfish needs, some hungry person decided to indulge in a burrito for lunch.  Based on the police report, it’s safe to assume that the burrito was purchased at “hole in the wall” Tacos Chukis, a Mexican restaurant in an upstairs mall on East Broadway in Seattle, Washington. Clearly unaware that “when you spread the wealth around, it’s good for everybody,” a whole $3.25 burrito was purchased for just one person.

If the burrito buyer was a more thoughtful human being, he would have promoted Mexican food equity and chosen a taco for $1.60 and given the other $1.60 to someone less fortunate.  And if he had done that, there would have been five cents’ change left over to redistribute to someone else, too. But that’s not what happened. Instead, after buying food at the Mexican eatery, the customer chose to tuck into a big fat burrito in plain sight right outside the restaurant. That’s when he was approached by Mahamed M. Abdi, a 24-year-old African-American fellow dressed in a “gray cloth cap and a white fur coat.”

Seems Mr. Abdi took Michelle and Barry at their word and must have felt justified in demanding a piece of someone else’s pie.  In keeping with the president’s ‘share the wealth’ motto, Abdi demanded: “Give me a bite of your burrito.”   After all, didn’t Michelle Obama say something like, “Someone is going to have to give up a piece of their [burrito] so that someone else can have more”?

The offended diner refused, and pointed out to Abdi that asking for a bite of a stranger’s “little donkey” is “rude!”

Because the restaurant wasn’t giving out free burritos, and in keeping with fair-share principles, those able to throw around the big bucks for selections off the expensive side of the chalkboard menu should always be prepared to offer a couple of bites to those President Obama calls the “less fortunate among us.”

After all, at the end of the day, didn’t buying the burrito support a successful small business (built by somebody other than the owners)? That’s why, to prove his commitment to Mexican food redistribution, Abdi pushed the greedy burrito eater and again demanded a bite.

The bite was not forthcoming.  Instead, after Mahamed “asked” a second time, with burrito in hand the insensitive diner rose from his seat outside the restaurant and attempted to vacate the vicinity.  That’s when, according to the Seattle Police Department report, Abdi punched the man in the head and ran away.

On behalf of socialist presidents, walloping people who refuse to ‘share the wealth’ ought to be a government-approved tactic.  In America we have the Lois Lerner types who, unlike Mahamed Abdi, do the head-punching in a very dignified manner.

Meanwhile, back in Seattle, as a result of being beaten, thankfully, the burrito owner only had “very slight redness [on his] forehead.” The injured party did not request or require treatment at the non-Obamacare approved Seattle Children’s Hospital.  The assault victim also did not cite post-traumatic burrito heist disorder, nor was he so devastated that he needed Washington State-approved physician suicide assistance.

The police eventually caught up with and arrested the famished Mr. Abdi, who, in a desperate cry for help, yelled obscenities and spit on the Plexiglass divider from the back seat of the police car.

Based on his rap sheet, Mr. Abdi is a man who, after being arrested more than a dozen times, clearly believes that wealth-sharing is a concept more people need to cheerfully embrace.  If the general public would just comply and share half of whatever they have whenever Mahamed wants it, it would do away with the need for him to assault Mexican restaurant customers.

What’s sad about the whole incident is that, based on policies that Michelle and Barack Obama promote, Abdi isn’t really a criminal.  He’s just ahead of his time in understanding what it means for others to willingly share their ‘piece of the pie’ with him and others like him.