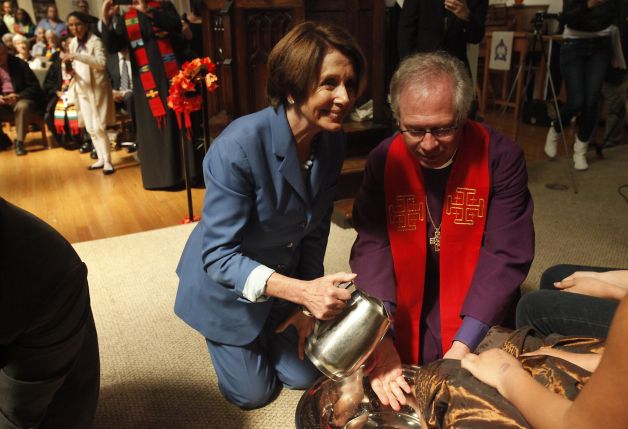 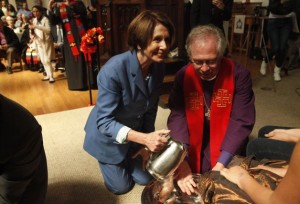 It’s already well established that those on the left are notorious for making up the rules as they go along, especially when it comes to Christianity, a religion they typically view with derision. Therefore, the only conclusion one can come to is that Barack Obama and Nancy Pelosi, both of whom profess to be Christians, must think that just as they believe the Constitution is a living/evolving document, the Bible is also open to being revised to agree with the left’s progressive agenda.

Take Nancy Pelosi, please…er I mean, for instance. This is a woman who calls herself a Catholic yet she is a vocal proponent of abortion on demand, which even the most ardent abortion supporter, if honest, would admit is considered murder by the God who “knit us together in our mother’s womb” (Ps 139:13).

The only explanation for liberals considering themselves people of faith while putting their approbation on abortion and other anti-Biblical lifestyles is that they’ve managed to convince themselves that their morally-relativistic opinions and self-aggrandizing actions take precedence over the inerrant, unchanging tenets of God’s word.

It could be that, while in the process of revising the Constitution and misinterpreting the Bible, the Obama and Pelosi types have convinced themselves that good deeds cancel out bad ones.

Think about liberals’ habit of making sure the world knows about every act of look-at-me benevolence they bestow on the less fortunate. Clearly Scripturally illiterate, Bible-revisers are no doubt unaware of what God says about public exhibitions of giving and caring.

Unbeknownst to progressives, the goal is not to broadcast good deeds or seek worldly praise, but rather to serve God in secret where only He sees and rewards.

As they make sure everyone notices and responds to their self-indulgent acts of kindness with applause, liberals relish being showered with praise for empathetic acts that they’re certain far surpass actions and gestures by people they know nothing about, but still deem hardhearted.

The only explanation for such bizarre beliefs and behavior is that liberals must think that in the mind of God “altruistic” policies such as issuing food stamps cancel out the slaughter of 60 million unborn human beings.

It’s either that, or by attempting to influence large numbers of clueless people through public displays of mock Christianity, pro-abortion liberals gain the consensus they think enables them to publicly refer to themselves as Christians.

A person calling him- or herself a Christian while supporting laws that are diametrically opposed to the Word of God illustrates the level of delusion under which those who “clean the outside of the cup, but are full of robbery and wickedness” operate (Luke 11:39).

As for Barack Obama, it’s already confirmed that he lies, cheats, abuses the sick and dying, tramples on religious freedom, mocks Bible-believing Americans, supports Planned Parenthood, and puts his approbation on babies born alive in botched abortions being left to die without water, warmth and oxygen. Yet, all he has to do is quote a couple of lines of Scripture at a prayer breakfast and his admirers insist he is a Christian.

In like manner, on Holy Thursday, Nancy Pelosi, who besides abortion and gay marriage also stands on the side of illegal immigrants’ breaking the law, decided to make a public mockery of Jesus’, the humblest of kings, washing the feet of His disciples prior to being crucified and suffering on Golgotha’s hill.

Democratic House Minority Leader Nancy Pelosi, a woman who has zero problem with the termination of the lives of unborn children, displayed her own version of Holy Thursday compassion by joining San Francisco Bishop Marc Andrus to wash the feet of immigrant children at Saint John the Evangelist Episcopal Church.

Could it be that in Ms. Pelosi’s mind, washing the feet of two children makes up for the death of the 3,000 pre-born children in America who died on the same day Nancy the Foot Washer was scrubbing the toes of a couple of kids who miraculously, no thanks to her, made it out of the womb alive?

With that said, Nancy, Barack and every other so-called “caring’” liberal on the planet can call themselves anything they want. They can feed the poor, care for the sick, wash feet, and even quote Scripture, but if they support the anti-life, pro-death agenda of the left, according to God’s word they typify those whom the One who can see hearts addressed when He said:

Woe to you, teachers of the law and Pharisees, you hypocrites! You are like whitewashed tombs, which look beautiful on the outside but on the inside is full of the bones of the dead and everything unclean.