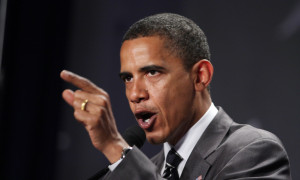 A lot of insight can be gained from revisiting snippets of Barack Obama’s old speeches. The lectures the president has imposed on his audiences provide an understanding of how one man’s view of the world stands to irrevocably impact America’s future.

Take for instance the president’s comments on the Middle East that he delivered prior to a scheduled meeting with Bibi Netanyahu in May of 2011. Those remarks were delivered one year after Obama stomped out of the Roosevelt Room and left Netanyahu to stew for an hour while he ate dinner in the residential wing. As usual, Obama had all the answers to problems he knows nothing about.

The president covered a lot of ground, but at one point, Obama brought up a young Tunisian street vendor named Mohammed Bouazizi who lost his business when a police officer confiscated his cart. When officials refused to hear his complaints, Bouazizi, who Obama said was never “particularly active in politics,” self-immolated in frustration.

The president said, “This was not unique.  It’s the same kind of humiliation that takes place every day in many parts of the world -– the relentless tyranny of governments that deny their citizens dignity.”

Little did we realize at the time that Obama would be describing the tyranny he himself imposes by denying frustrated Americans the dignity to which we are constitutionally entitled when our leaders uphold the rule of law and adhere to our nation’s founding document.

If Obama felt so moved to address the travails of the people living in Middle East three years ago, how come he refuses to recognize the similarities to the American people, many of whom feel cowed under oppressive government control and frustrated by Obama’s dogged refusal to recognize their fear and anger over Obamacare, the IRS, Benghazi, and the current orchestrated crisis on our southern border?

“There are times in the course of history,” the president said, “when the actions of ordinary citizens spark movements for change because they speak to a longing for freedom that has been building up for years.” At the time, did Obama anticipate that there would be a “longing for freedom…building up for years” here in America after enduring six years of his domineering policies?

Come to think of it, when Obama speaks, does he ever listen to what comes out of his mouth? He spoke of Rosa Parks and how in Tunisia, as in America, “the defiance of patriots” had the power to “tap into the frustration felt throughout a country” until those resisting tyranny accomplished their goal.

Then he actually said:

In too many countries power has been concentrated in the hands of a few… a citizen like that young vendor had nowhere to turn – no honest judiciary to hear his case; no independent media to give him voice; no credible political party to represent his views; no free and fair election where he could choose his leader.

Referring to the conflict-ridden Middle East, Obama also touched upon “strategies of repression and strategies of diversion,” which are the very same manipulative tactics he uses in the United States to expand his power. The president declared, “Divisions of tribe, ethnicity and religious sect…[being]… manipulated as a means of holding on to power, or taking it away from somebody else.” Sound familiar?

Positioning himself to take credit for a Middle East success story that never actually came to pass, Obama said, “So we face a historic opportunity.  We have the chance to show that America values the dignity of the street vendor in Tunisia more than the raw power of the dictator.”

Based on the public’s current aversion to the deliberate creation of an illegal immigration crisis on the border, it certainly seems as though Obama’s use of raw power is what’s causing the loss of dignity Americans are increasingly feeling as hundreds of thousands of illegals pour into our country, many of whom are carrying infectious diseases.

And while Barack Obama’s doubletalk and disingenuousness are always predictable, from where we stand today, probably the most stunning pronouncement of the Middle East speech was when the Destroyer of Borders gave border advice.

Even though nobody asked him, in a few words Obama shifted longstanding U.S. policy and spoke on America’s behalf when he said, “We believe the borders of Israel and Palestine should be based on the 1967 lines with mutually agreed swaps, so that secure and recognized borders are established for both states.”

Why would a community organizer who never planned to recognize and secure the borders of America feel qualified to suggest “secure and recognized borders” for Palestine and Israel? Even more concerning is the very real possibility that this man might be capable of suggesting that the U.S. share a piece of our territorial pie by relinquishing a portion of our established southern borders to those currently invading our homeland.

Sound far-fetched? Think again. Isn’t that what he suggested Israel should do?

Paraphrasing his favorite quote for the Middle East, the Alinskyite also said, “But after decades of accepting the world as it is in the region, we have a chance to pursue the world as it should be.”

True Americans certainly do respect “the right of all peaceful and law-abiding voices to be heard, even if we disagree with them.” But Barack Obama most definitely does not respect that right, especially if the peaceful and law-abiding voices belong to border patrol agents or to the media wanting to speak out about the dire consequences sure to follow the fiasco in Texas and Arizona.

In the meantime, the words that Barack Obama meant for the Middle East three years ago are now more suited to a nation suffering as a result of the chaos he is currently fostering here at home.