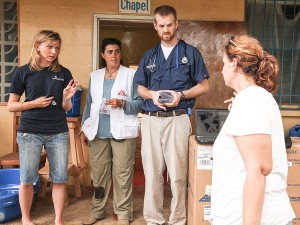 Quietly and without fanfare or demand for attention, Dr. Kent Brantly, a young doctor from Fort Worth, Texas, was doing missionary work in Liberia with evangelist Billy Graham’s family-founded charity Samaritan’s Purse when he contracted the merciless hemorrhagic Ebola virus, which kills 50-90% of those unfortunate enough to contract it.

By going to West Africa to care for the sick and dying, the husband and father of two small children demonstrated true heroism, and through his service to others, the Christ-like charity that Barack Obama is always pontificating about but never seems to practice.

Because of his decision to serve “the least of these,” Brantly lived out the Scripture verse where Jesus said in John 15: 13, “Greater love hath no man than this, that a man lay down his life for his friends.” Little did Dr. Brantly know that when he committed himself to minister to Ebola patients, he would be literally laying down his life.

Despite wearing gloves, gowns, and face visors to prevent contact between patients’ bodily fluids and caretakers’ mucous membranes such as the eyes, mouth, nose, and ears, somehow the doctor and his colleague Nancy Writebol, an American aid worker for SIM U.S.A., both contracted the deadly virus.

After coming down with fever, headache, and abdominal pain, the two Americans were diagnosed with Ebola virus and placed in a medical isolation unit on the outskirts of Liberia’s capital.

The only treatment the doctor received came from a 14-year-old boy who was treated by Brantly for Ebola and miraculously recovered.  The young boy’s family was so grateful their child’s life was saved that in an effort to shore up his immune system with the antibodies of someone who survived the virus, they offered the boy’s blood to be transfused into Brantly.

In addition to the blood transfusion, an experimental treatment was offered to Brantly, but because there were only one, not two doses, the selfless doctor again laid down his life and insisted the serum be given to 60-year-old Writebol.

Unfortunately, after foregoing the serum, that very night the doctor’s condition took a turn for the worse.

Currently, the nation is short on true heroism and big on false bravado.  Leaders lack sincere conviction, and have hollow hearts that are far removed from the Scripture verses they quote merely for political expediency and advancement of their own agenda.

As a result, there is an intrinsic hunger in the hearts of many for someone who embodies a higher standard – an individual who actually practices what they preach and doesn’t just talk about sacrifice, sharing, and caring for the less fortunate.  Dr. Brantly is that person, because his self-sacrifice epitomizes what authentic Christ-like discipleship is all about.

While politicians justify self-gratification and fund procedures that assist recklessness in the abnegation of responsibility, a young man, in obedience to Jesus’s command, was willing to die so that another person might live. And with that decision, without speaking one word Dr. Kent Brantly, who prayed that God would spare his life, showed a lost and struggling world the personhood of Jesus and what it means to be a follower of Christ.

Now, after being flown to Georgia to be treated by infectious disease specialists at Emory University Hospital and after taking a turn for the worse, with help, like Lazarus, Dr. Brantly actually stood up and walked from the ambulance into the hospital.

Dr. Tom Frieden, director of the U.S. Centers for Disease Control and Prevention (CDC) in Atlanta, said, “It’s encouraging that he seems to be improving – that’s really important – and we’re hoping he’ll continue to improve.”

Although statistically the odds of survival were originally against Kent Brantly, doctors are “guardedly optimistic” that he will continue to improve.

Brantly is defying a virus that kills almost everyone who contracts it and reports are that he continues to get stronger, and here’s why: so that someone else could live, Brantly had forfeited that one dose of lifesaving serum in Liberia that was intended for him.

Now the good doctor’s prayers are being answered, and in all probability he will survive the often-fatal disease, but not because of Emory University Hospital, proper hydration, blood transfusions, dialysis, the dose of the serum he finally received, or breathing with the help of a respirator.  Kent Brantly’s life will be spared because Jesus promised the faithful in Matt 10:39 that “Whoever finds their life will lose it, and whoever loses their life for my sake will find it.”

Update: Apparently, after refusing the dose, Dr. Brantly asked for the dose because he could not breathe.