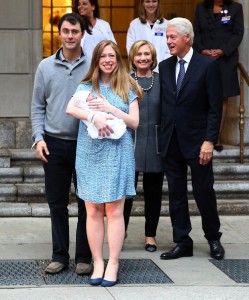 At Lenox Hill Hospital on the Upper East Side of Manhattan, adored child and compelling television journalist Chelsea Clinton bore a daughter named Charlotte and sycophant Democrats are behaving as if the royal family has a new member.

Surely if the heir to the Clinton throne were male he would have been named after Mt. Everest climber Sir Edmund Hillary like his grandmother, who sometimes tends to embellish the truth. Instead, could it be that the sure-to-be politically correct little Clinton-Mevinsky heir was named after Queen Charlotte of Mecklenburg-Strelitz, believed to have been England’s first black queen?

Regardless of her namesake, following the birth of the baby, America’s “first black president” Bill and his publicity-hound phony wife rushed to Chelsea’s bedside. The whole baby thing is perfect for the Clintons, who could use a fresh new prop as they get Ready for Hillary 2016.

What could be better than a curly-haired, chubby-legged cherub to steal the hearts of fence-sitting voters?

For those of us more familiar with reality, after breathing a sigh of relief that another innocent baby has cheated the scourge of the abortionist, a few thoughts come to mind concerning Charlotte Clinton-Mezvinsky’s grandparents.

For starters, the photo Hillary tweeted with Bill leaning over Grandma tickling the baby’s chin with his long, spindly, “I did not have sexual relations with that woman” pointing finger, sporting that fake wedding band, was a tad creepy.

What else did grandpa do, hand out “It’s a Girl!” cigars?

Then there’s pro-choice Hillary. It’s a little unsettling seeing an abortion advocate staring lovingly into the face of the little munchkin in the pink skullcap, especially knowing that with Grandma’s approval, 3,000 unborn babies per day have been aborted since Charlotte was conceived.

Despite pretending to grill precooked steaks in Iowa, Hillary Clinton has tried to convince everyone that she is postponing making a decision about whether to run for president until after she first enjoys time being a grandmother.

Bill Clinton, who wouldn’t know the truth if it smacked him upside the head, helped reinforce that lie in 2011 when he told reporters, “I would like to have a happy wife, and she won’t be unless she’s a grandmother…It’s something she wants more than she wanted to be president.”

Earth to Bill: Grandma Hillary might have been a happier wife if you had cooled it with all the skirt-chasing.

As for the ‘Hillary wants to be a grandmother…more than she wants to be president’ codswallop, if you believe that one there’s a couple of high-end cigars recently found in Grandpa’s White House humidor for sale.

Ironically, like her newborn granddaughter, Hillary’s muse Eleanor Roosevelt was also a Libra. So, during her next necromancy session, maybe the presidential jobseeker should check in with the grandmother of 13 for advice on whether she should take on a Republican opponent in the 2016 election.

Whatever her decision, September 26th , the day of Charlotte’s birth, which happens to coincide with the day in 1934 that the RMS Queen Mary was launched, would be a seminal date for another ‘relatable grandmother’ to decide to launch her White House bid.

Furthermore, Hillary Clinton also bears the title of being, hands down, the “smartest woman in the world,” and besides being the proud mother of a daughter who jogged around the World Trade Center on 9/11, she has successfully dodged sniper fire and singlehandedly came up with the now-famous Benghazi slogan, “what difference, at this point, does it make?”

As for baby Clinton-Mezvinsky’s eclectic parents, they hope to raise their daughter both Methodist and Jewish. In addition, instead of Democrat donkeys, the plan is to decorate Charlotte’s nursery with elephants. Eager to save African pachyderms, Mrs. Mevinsky said she lives in fear her child will “grow up in a planet without elephants,” while the rest of America lives in fear of living on a planet run by Democrat asses.

Take Hillary Clinton, for instance. Hillary admires Margaret Sanger while advocating for children, and is chockfull of childrearing advice.

That’s why Grandma is the perfect person to tackle the Jewish/Methodist elephant/donkey confusion. On second thought, maybe before readying her pantsuit collection and climbing aboard the ‘Ready for Hillary 2016’ tour bus, which has been gassed up since the 1960s, Mrs. Clinton should just recommend that Chelsea and Mark hand the baby over to the child-raising ‘village’ as soon as possible.

Either way, Hillary is still the go-to person for parenting advice, even if Mr. and Mrs. Mezvinsky hold off for a while on ‘The Village’ idea and choose to take Charlotte home to their humble $10 million Madison Avenue abode.
Hillary believes that parents should “resist the impulse to ‘prove’ their love by showering children with things they do not need and give them precious time and attention instead.” Before showering Chelsea with a $3-5 million wedding, that’s exactly how Mom, who spent 40 years clawing her way to the top of the political heap, and Dad, who spent most of his time groping women in White House hallways, raised their little girl.

So now, after doing the obligatory goo-goo ga-ga thing and making sure to tweet out the ‘look at me I’m playing grandma’ photo, Hillary can finally hit the campaign trail claiming she’s doing so merely out of concern for her grandchild’s future.

Whether Hillary runs or not, Bill said that “Charlotte’s life is off to a good start.” The buzz is that (God help us all) the newborn could run for president by 2052.

In the meantime, with her enviable Washington D.C. connections, maybe Grandpa could start pulling some strings so Charlotte can commence her political career early with a gig as a White House intern.