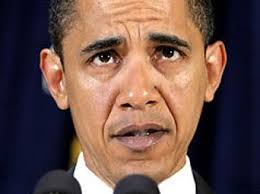 Announcing Eric Holder’s departure from his position as attorney general, President Barack Obama of “corpse-man” fame mentioned the AG’s wife, his “good friend” Dr. Sharon Malone. Dr. Malone, who is partial owner of an abortion clinic along with an indicted abortionist in Georgia, according to Barack, the “smartest guy in the room”, is also an “ohbee-guynee”.

As everyone knows, when he’s not gracing the “57 States” of America with his genius and geographical knowledge, the ohbee-guynee mispronunciator directs his all-encompassing expertise toward restructuring America’s healthcare system. So who better than Barack Obama would know how to articulate the actual abbreviated name of a type of doctor who attends to lady parts and defies Planned Parenthood by delivering the babies who – no thanks to Obama – successfully make it out of the womb alive?

Genital-themed mispronunciation is habitual coming from this man. One time the president actually called the Choctaw Nation the – ahem – “cock-taw-nation.”

What happens when Obama accompanies his wife on her annual “ohbee-guynee” exam? Does he confuse the words on the anatomical chart with the doctor’s name and call the attending physician Dr. O’Vary?

Regrettably, Teleprompters do not provide diction assistance. That’s why, when he was in Tanzania in 2013, Obama mangled French President Francois Hollande‘s name. Obama chose to say Hollande in what he obviously thought was the exotic French way, “oo-lawn”, which is similar to how one pronounces “oolong”, as in oolong tea – instead of the more respectful, reality-based French way, “oh-lond”.

But Francois shouldn’t feel bad, because Barry couldn’t even get his “great friend” New York Senator Kirsten Gillibrand’s name right. Even though Gillibrand is pronounced with a soft g, as in JILL-i-brand, her good buddy Obama said the name of the woman Harry Reid referred to as the “hottest member” of the Senate with a hard “g”. as in fish gills.

Being an Obama, the president is probably big on the letter “O.” It’s either that or when he was in the State of Washington after the mudslide his stomach was growling because he mispronounced the town of Oso as “Osso,” as in Osso Buco, a fabulous Italian dish that features slow-cooked veal shanks.

Although he is seen as a tireless champion for the poor, at Michigan State University the always-relatable Obama mispronounced ramen noodles, calling them “rah-men”. On the other hand it’s pretty safe to assume that Barack Obama wouldn’t need coaching on how to pronounce Wagyu (Wag-you), as in $100-per-pound Wagyu beef.

Either way, as America now totters on the precipice of a potential pandemic, Obama, who claims to really be in touch with the situation, actually mispronounced the name of the deadly Ebola virus, calling it “Ebolee,” which rhymes with “baloney”.

But mock thee not, because according to Nancy Pelosi, Obama is renowned for his unmatched brilliance and is considered by her, a woman whose upper lip regularly gets caught on her caps, to be “completely eloquent”.

Hence, the only explanation for all these verbal distortions must be that Barack Obama is ahead of the linguistic curve. Who knows, he could very well be the only one in the world who, instead of our dreadfully ordinary “Pack-i-stan”, pronounces Pah-kee-stahn correctly.